This is a summary of the article "Sulfur Isotopes in Diamonds Reveal Differences in Continent Construction" by Karen V. Smit, Steven B. Shirey, Erik H. Hauri and Richard A. Stern published on 26 April 2019, in Science.

We found that the sulphides recorded two episodes of subduction in the West African continent. Subduction is when the oceanic crust is thrust under another tectonic plate during a collision and into the deep earth. The first subduction event recorded by Zimmi sulphides occurred around three billion years ago and the second was around 650 million years ago. 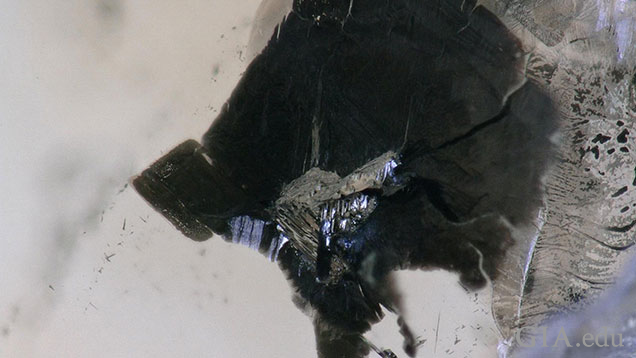 The sulphides have isotopic compositions that indicate the sulphur was cycled through the ancient atmosphere prior to the rise of oxygen 2.5 – 2.3 billion years ago (Farquhar et al., 2001). This is indicated by mass-independently fractionated (MIF) sulphur isotopes. Any modern sulphur (or sulphur that did not cycle through the ancient atmosphere) will not have these MIF isotopes1. The presence of MIF sulphur in these sulphide inclusions indicates that they have a surficial origin in the earth’s ancient atmosphere. The sulphides were probably emplaced into the deep earth around 3 billion years ago – at a time that has been well established for subduction and the incorporation of oceanic crust material into the mantle2,3.

We also measured the rhenium-osmium isotopes in these sulphide inclusions. Rhenium-osmium is the most widely used technique to date the time of diamond formation4. Zimmi diamonds were found to have 650-million-year-old ages5, an age that overlaps with subduction and collisional mountain building in the region, between 700 and 550 million years ago. Subduction of the oceanic crust and its subsequent dehydration would have introduced carbon-bearing fluids into the deep earth for diamond formation6.

Earth’s oldest continents (called cratons) are stabilised by lithospheric mantle keels. The stability of earth’s continents in the face of destructive tectonic activity provided the essential geological backdrop for the emergence of life on our planet. Since this is the only tectonically active, rocky planet that we know, understanding the geology of how our continents formed is a crucial part of discerning what makes earth habitable.

The stability of cratons depends on the underlying mantle keels that are around 150–200 km thick. The processes for how these mantle keels form are still being debated, and there are several different theories for their origin. Some of the models for craton formation involve subduction-style plate tectonics where plates are subducted into the deep earth and stabilise the cratonic keels. Other models do not invoke subduction, and instead, require deeper mantle processes such as melting in mantle plumes or melting at oceanic plateaus.

Luckily these mantle keels have the ideal conditions for diamond formation. The majority of natural diamonds form in these cratonic mantle keels. Diamonds become important samples that can be used to investigate how the stabilising keels below the oldest continents are formed.

Sulphur isotopes in diamonds, combined with their Re-Os ages, can be used to track multiple subduction events during craton growth, even those separated by billions of years. Subduction processes were essential to the growth and modification of the West African craton over a period of 2 billion years.

But diamonds mined in northern Canada do not show the same sulphur chemistry. Diamonds from the Ekati mine have 3.5-billion-year-old rhenium-osmium ages and do not contain MIF sulphur8,9. This means that the mantle keel in this region originated in some way that did not incorporate surface material. The sulphur in the Canadian diamonds does not tell us how the mantle keel formed, only how it was not formed. 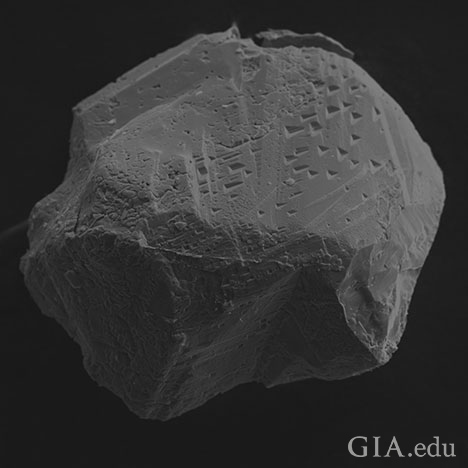 To characterise the diamonds and image the inclusions, we first laser cut and polished double-sided plates of the diamonds.

We broke the diamond plates using a small hammer and a steel cracker to release the sulphide inclusions. The inclusions are tiny and weighed between 3 and 162 micrograms. After breaking each inclusion out of the diamond, we imaged it and analysed its major element composition using a scanning electron microscope.

In a clean laboratory, we then dissolved the sulphide in some acid along with a known amount of tracer solution known as an isotopic spike. Chemical procedures were then carried out to separate the rhenium and osmium into different acidic solutions. The solutions that contained rhenium and osmium were each dried out on a hotplate.

The dry salt of osmium was placed on a metallic filament, which was then placed in a thermal ionisation mass spectrometer (TIMS). The filament was heated to produce ions that were then accelerated through the instrument and the different osmium isotopes were measured on a very sensitive detector.

The dried salt of rhenium was taken up into a dilute acid solution. That solution was introduced into a multi-collector inductively coupled mass spectrometer (MC-ICP-MS). The solution was ionised in a plasma and those ions were accelerated through the instrument, where the two different rhenium isotopes were measured simultaneously on very sensitive detectors.

The amount of rhenium and osmium that we measured in the sulphides is in the femtogram to picogram range - where 1 femtogram is 10-15 g or 1 part per quadrillion (ppq) and 1 picogram is 10-12 g or 1 part per trillion (ppt). Because we were measuring such tiny amounts, any small amount of contamination could have ruined the sample. This is why it was essential to carry out this work in a clean laboratory with dedicated supplies for diamond inclusion work.

Rhenium-osmium analyses were carried out using chemistry labs and a Thermo-Fisher Triton instrument at the Department of Terrestrial Magnetism at the Carnegie Institution for Science.

Diamond plates containing the exposed sulphide inclusions were placed in a secondary ion mass spectrometer (SIMS). The samples were bombarded with a caesium ion beam to create small pits in the sulphides. The material released from the sulphides was then accelerated through the instrument and the four different sulphur isotopes were measured simultaneously on very sensitive detectors.

The diamonds used in this study are from the Zimmi alluvial deposit in Sierra Leone. The Zimmi mining area is located south of the town Zimmi, near the Liberia-Sierra Leone border. The Zimmi locality is known for producing yellow diamonds with abundant sulphide inclusions.

Karen V. Smit has been a research scientist at the Gemological Institute of America (GIA) since 2014. She is interested in using diamonds and their mantle host rocks to understand diamond formation processes in the deep earth. Her research focuses on the origin of the earth’s continents, how plate tectonic processes influence diamond stability and, most recently, on using the spectroscopic features of natural diamonds to distinguish them from lab-grown and treated diamonds.

Steven B. Shirey has been a staff member at the Department of Terrestrial Magnetism of the Carnegie Institution for Science for 34 years. Shirey's research focuses on the evolution of the earth's continents, especially as a function of mantle evolution. His interest in diamonds began more than 20 years ago as a way to examine continent formation and plate tectonics from the deepest possible perspective in the mantle.

Richard A. Stern is a research scientist and ion probe facility manager at the University of Alberta. His research over the last 25 years has focused on the development and application of secondary ion mass spectrometry to a broad range of topics in geochemistry and geochronology, most recently emphasising light stable isotopes.

Diamonds from the Deep: How Do Diamonds Form in the Deep Earth? (in English)

Dr Evan Smith, Ph.D., GIA research scientist, shares his findings on the unexpected origins of big diamonds and what their characteristics tell us about the earth.

This is an extended abstract of the article ‘Large Gem Diamonds From Metallic Liquid in Earth’s Deep Mantle,’ published on 16 December 2016 in Science magazine. GIA Postdoctoral Research Fellow Evan Smith is the lead author of the article.

This is an extended abstract of the article ‘Blue boron-bearing diamonds from Earth’s lower mantle,’ published in the 2018 August issue of Nature. GIA researcher Evan Smith is the lead author of the article.