Large and exceptional gem diamonds like the famous Cullinan or Lesotho Promise tend to have a set of physical characteristics that distinguish them from other kinds of diamonds (fig 1). One of the most noted characteristics is a low nitrogen concentration, such that these diamonds are predominantly type II, although not all type II diamonds necessarily belong to this family. New research published in Science reveals that these Cullinan-like gems, dubbed "CLIPPIR" diamonds, tell us something remarkable about the deep earth1. 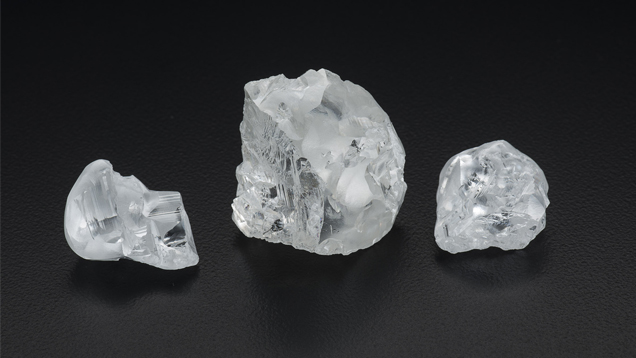 The new findings show that CLIPPIR diamonds may have grown from a metallic liquid in Earth’s deep mantle1. This iron-nickel metal is created and stabilized by the high pressure minerals in the deep mantle2,3. Although the amount of metal in these regions of the mantle is likely about 1% or less, it is expected to regulate and limit the availability of oxygen. The distribution and availability of oxygen is one of the key parameters governing the large-scale geologic evolution of the Earth4. 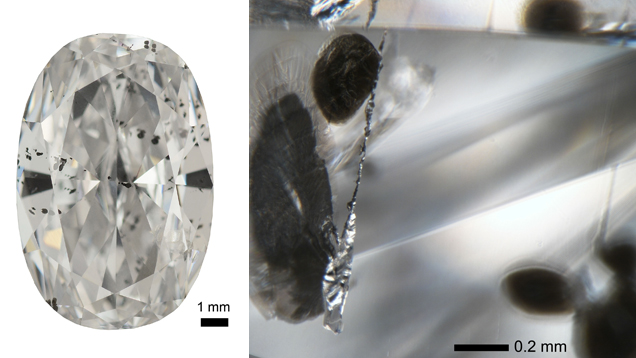 The composition of the inclusions provides the story. The metallic inclusions are a solidified mixture of iron, nickel, carbon, and sulfur, also containing traces of fluid methane and hydrogen in the thin tiny space between the metallic phases and the encasing diamond1. Originally, this mix was a larger mass of molten metallic liquid in Earth’s deep mantle, from which the pure carbon crystallized to form diamonds. Small droplets of this metallic liquid were occasionally trapped within the diamonds as they grew. During cutting and polishing, parts of the diamond that contain inclusions are often trimmed off or polished away to craft exquisite gems with minimal flaws. These offcut waste diamond pieces are not normally made available for research, but a special effort was made to obtain offcuts study the inclusions in this investigation. Diamonds are one of the most valuable scientific tools for studying the deep Earth, which is otherwise completely inaccessible and hidden from our view beneath the tectonic plates.

Previous experiments and theory have predicted for many years that parts of the deep mantle below about 250 km depth contain small amounts of metallic iron and have limited available oxygen2. Now, the metallic inclusions and their surrounding methane and hydrogen jackets in CLIPPIR diamonds provide consistent, systematic physical evidence to support this prediction. Though the extent of metal distribution is uncertain, this is a key observation for our understanding of the Earth and has broad implications for the behavior of the deep Earth, including the recycling of surface rocks into the convecting mantle, and the deep storage and cycling of carbon and hydrogen in the mantle through geologic time.

Through an arrangement with Science magazine, visitors to GIA.edu can access the full text of the article ‘Large Gem Diamonds From Metallic Liquid in Earth’s Deep Mantle’ from this webpage.