Identifying a gemstone by colour alone can lead to a case of mistaken identity, as numerous examples have shown over the course of history.

Take the most famous pretender, the Black Prince’s Ruby, for example. The large crimson, semi-polished crystal the size of an egg first appeared in 14th-century Spain when King Pedro of Castille seized it from the Moorish Prince Mohammed of Granada as spoils of battle. It changed hands many times throughout the Medieval era, finally remaining in the possession of several British kings and resides in the Imperial State Crown of England.

“Observe the gem under the polarising filter while I shine a light through the stone. At the same time, I will rotate the filter and turn the stone in several directions to avoid looking down the optic axis. Does the gem blink or change colour? No, it does not. Let me explain. If this were a ruby it would blink orangey-red to purplish-red. So you see, this red stone is an imposter! It could be a spinel or red garnet.”

Being a well-read detective, Poirot knew some basic differences between rubies, spinels and garnets. He knew that when light enters a ruby, the light beam will split (double refraction) and leave the ruby as two different colours (pleochroism): orangey-red and violetish-red (dichroic; two colours). But he also knew that there is one direction in a ruby that will appear as one colour. In order to see these two colours, he has to look at the stone in at least three different directions. Red spinels and garnets, however, will remain the same colour in all directions, which usually means that they are singly refractive.

Emerald and tsavorite garnet can appear similar in colour. Using the penlight and loupe to look for doubling or pleochroism would separate emerald, which is doubly refractive, from tsavorite, which is singly refractive. Also, emerald’s lustre is vitreous (glass-like) to waxy, while tsavorite’s is greasy to vitreous.

Determining a gem’s optic character or refraction – along with visual observations of lustre, transparency, cut, heft, fracture and phenomenon, if present – are the basics of gem identification. 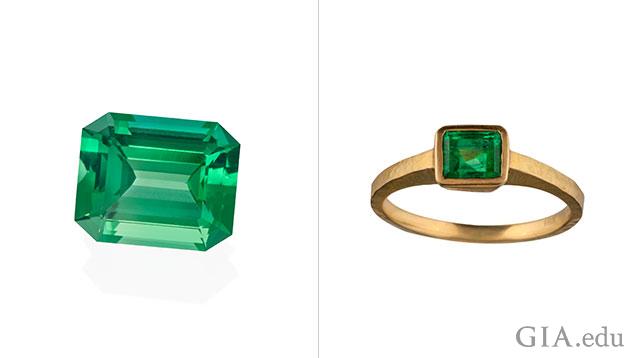 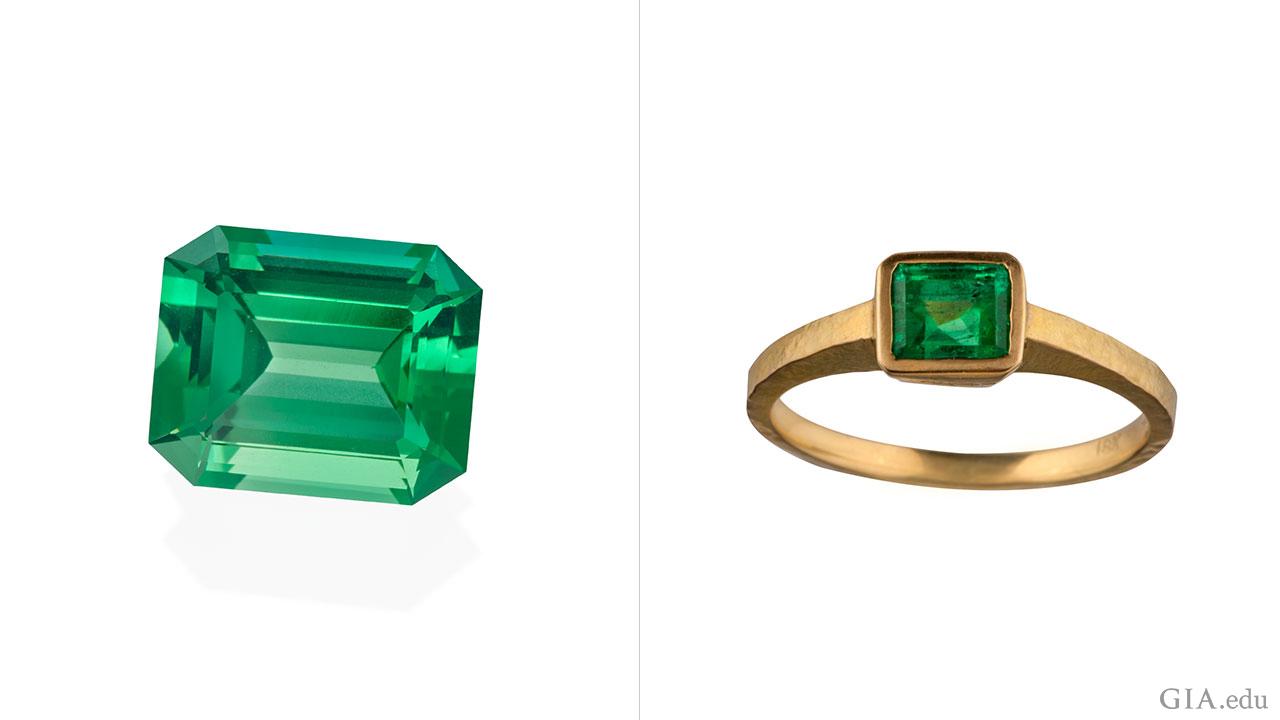 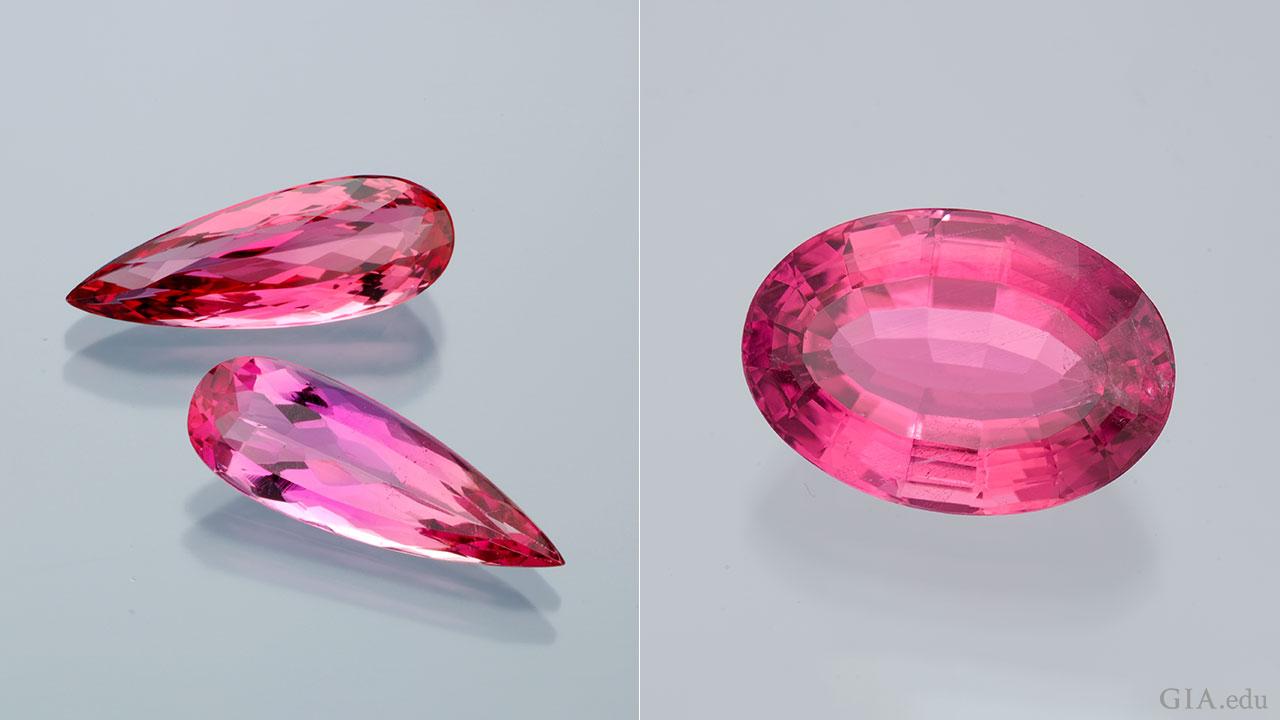 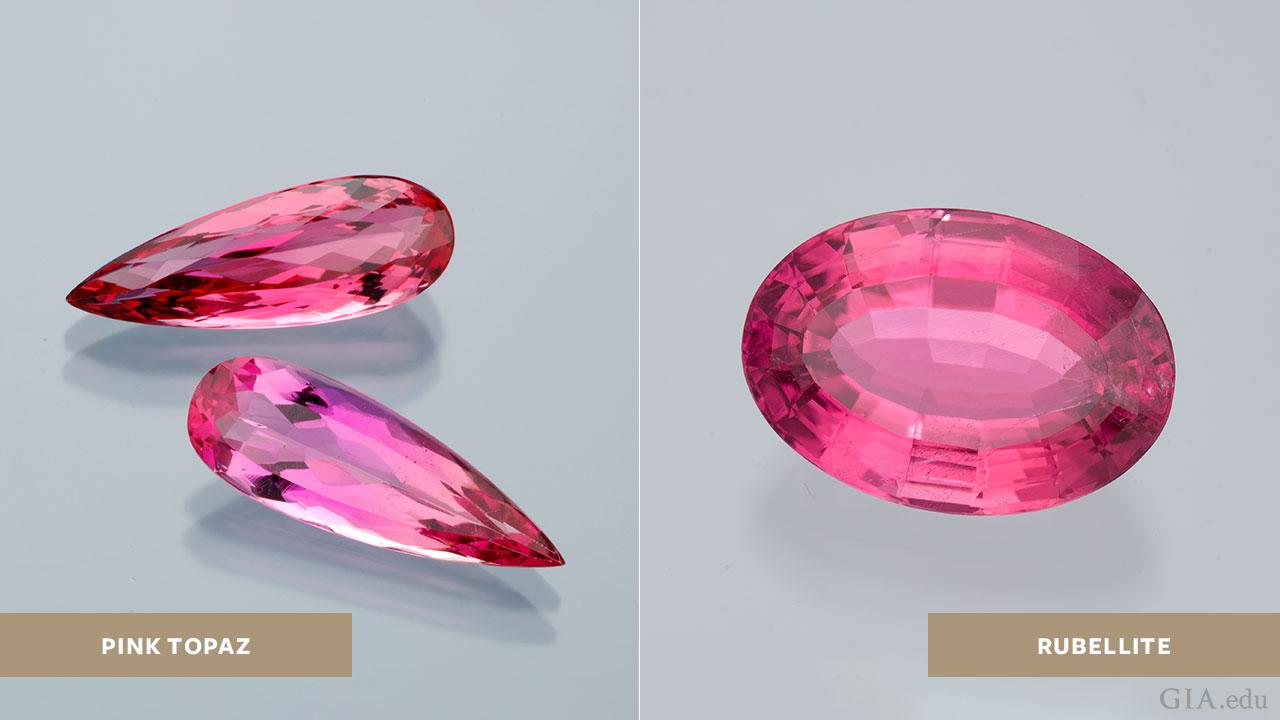 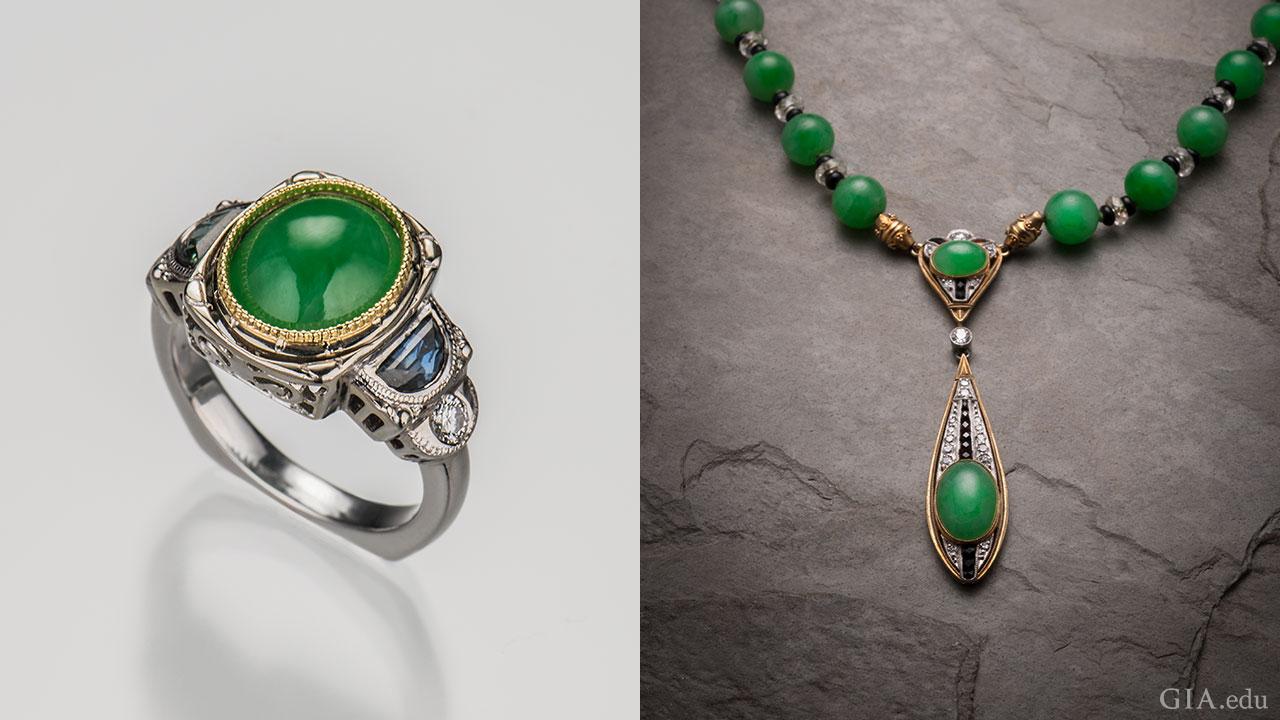 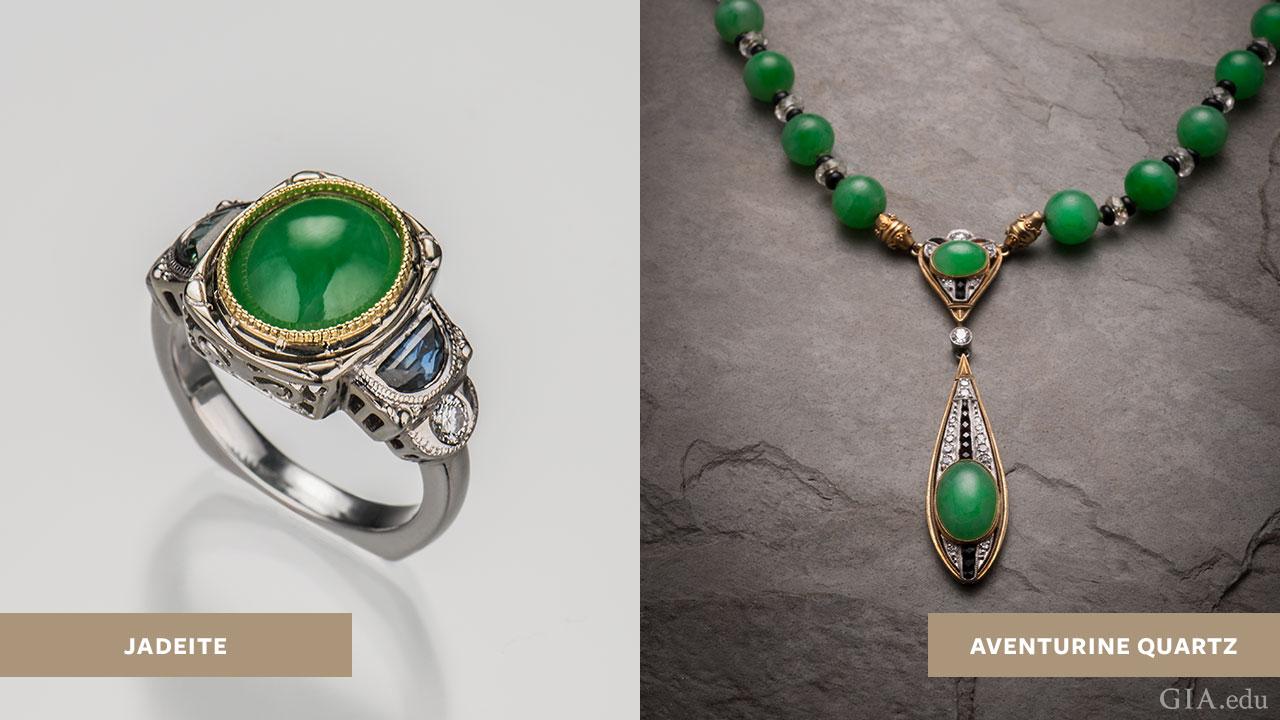 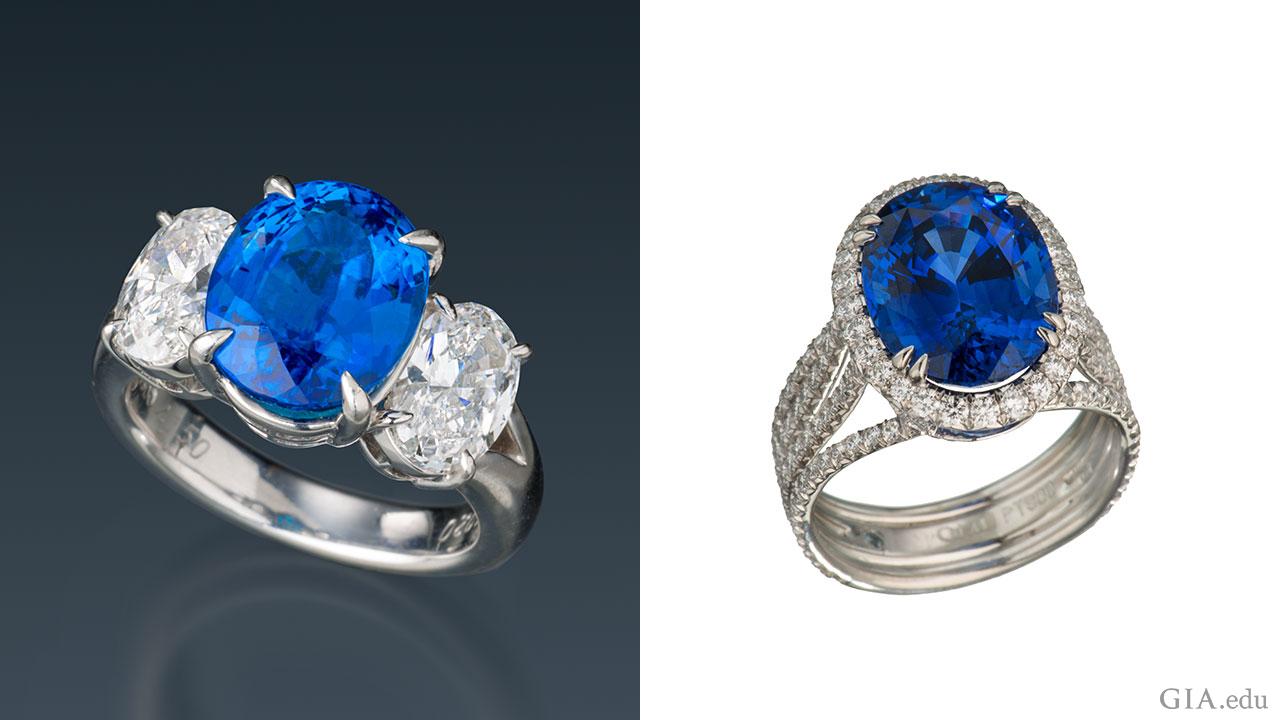 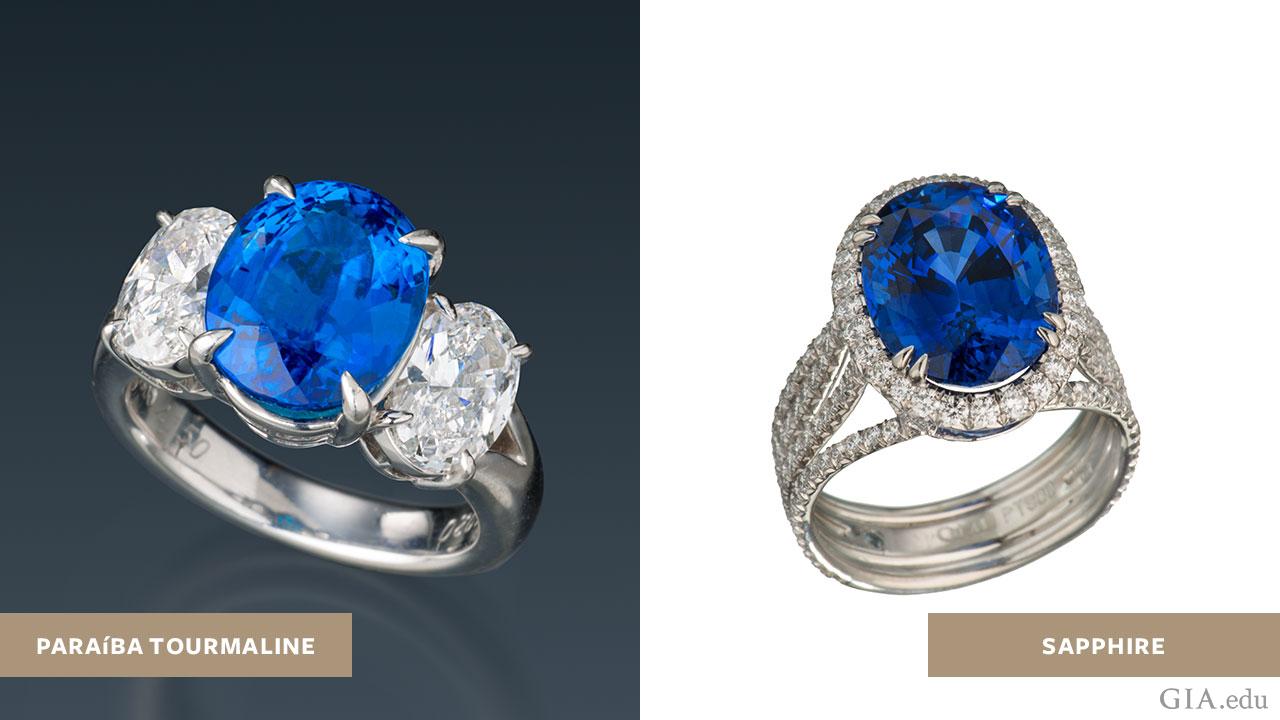 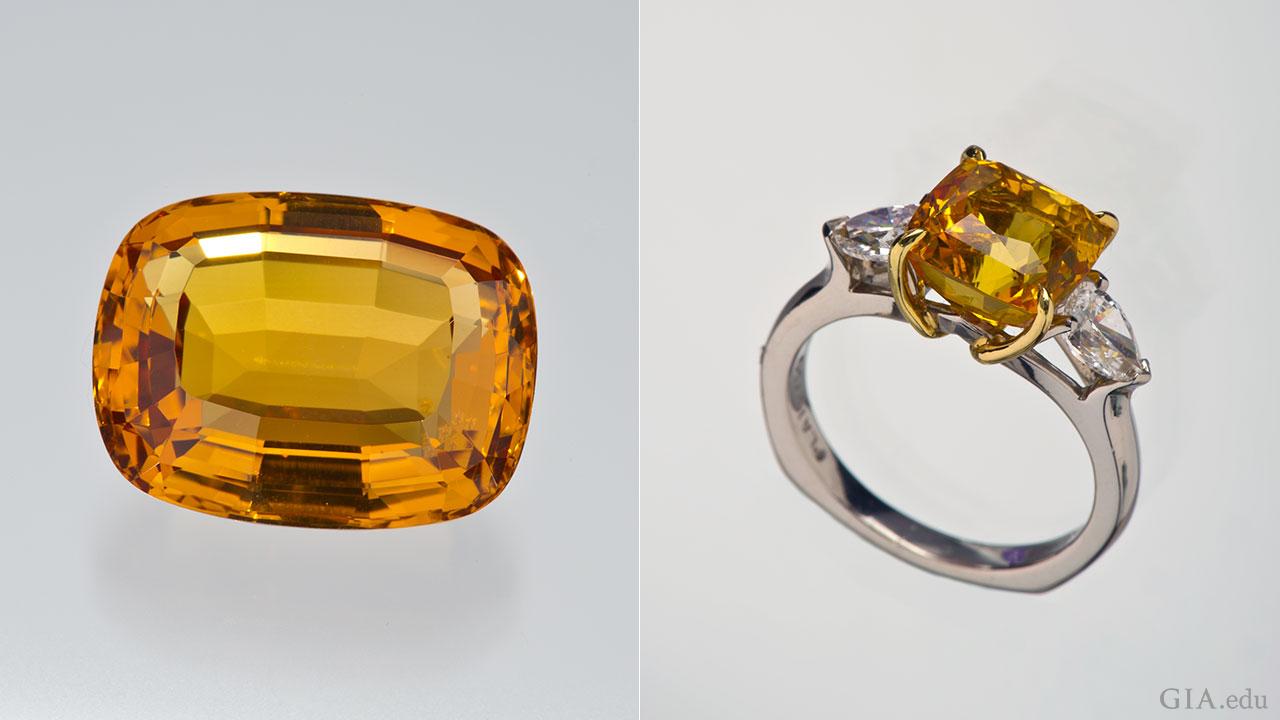 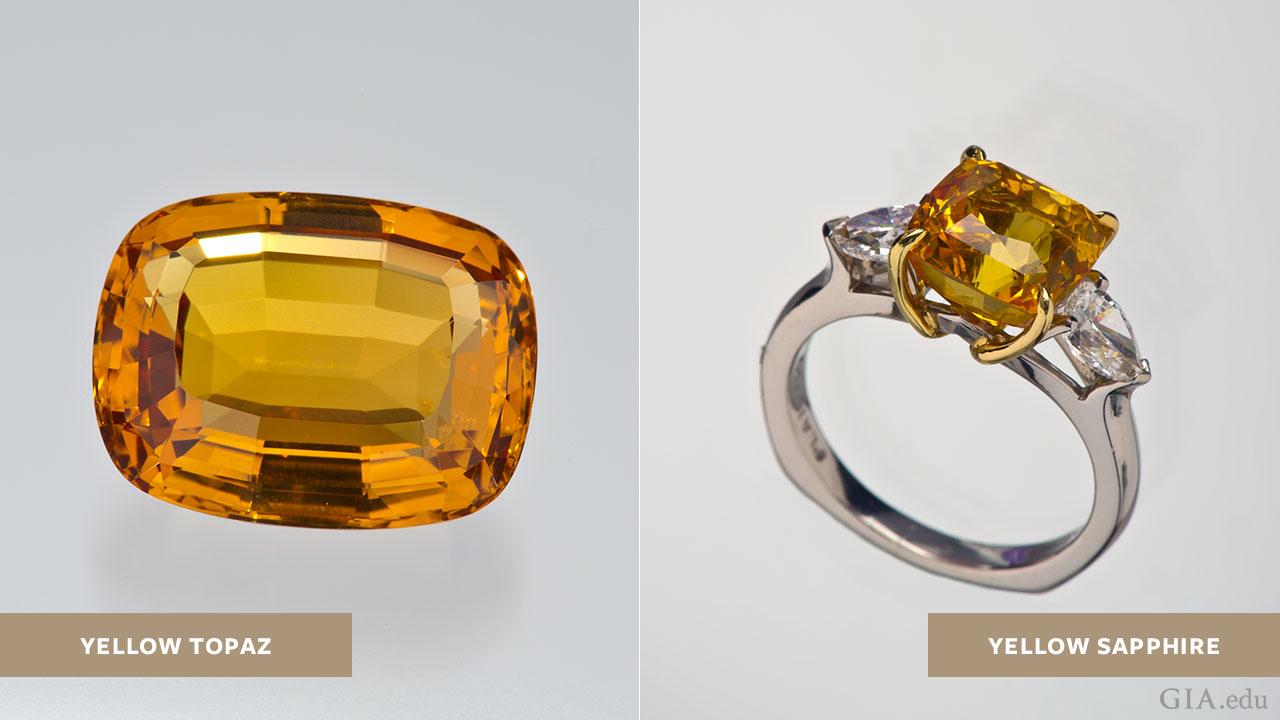 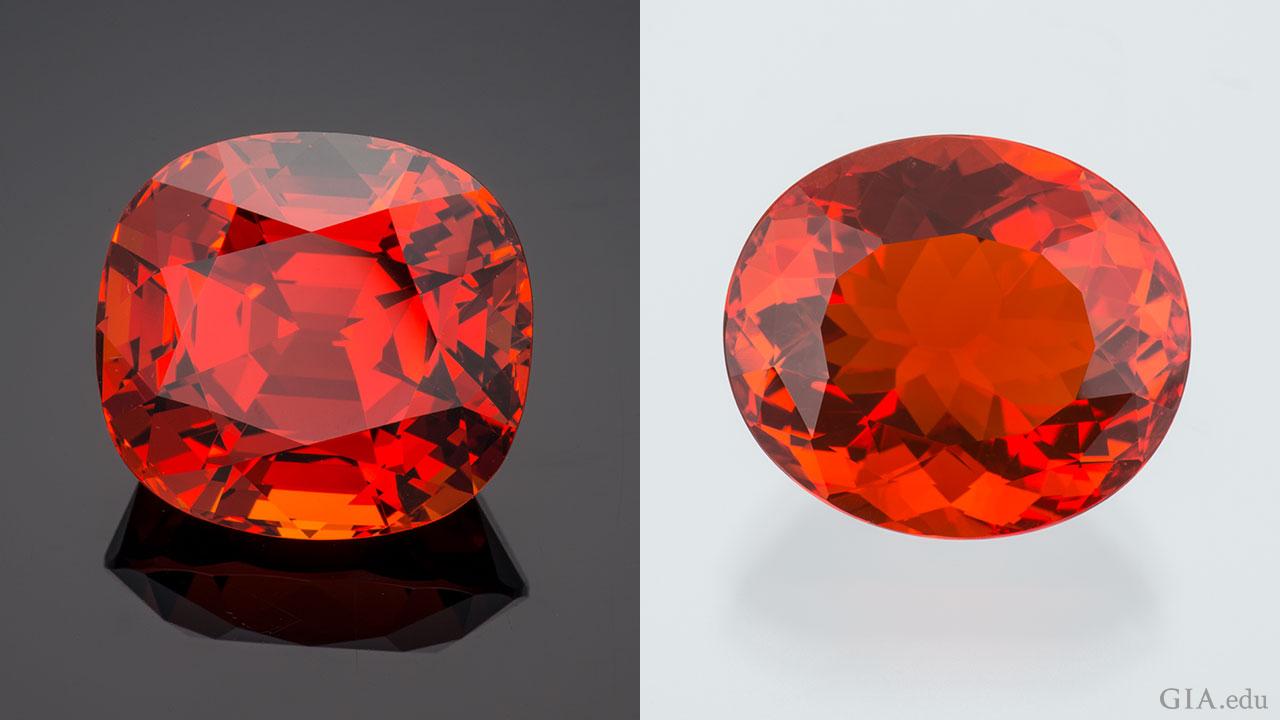 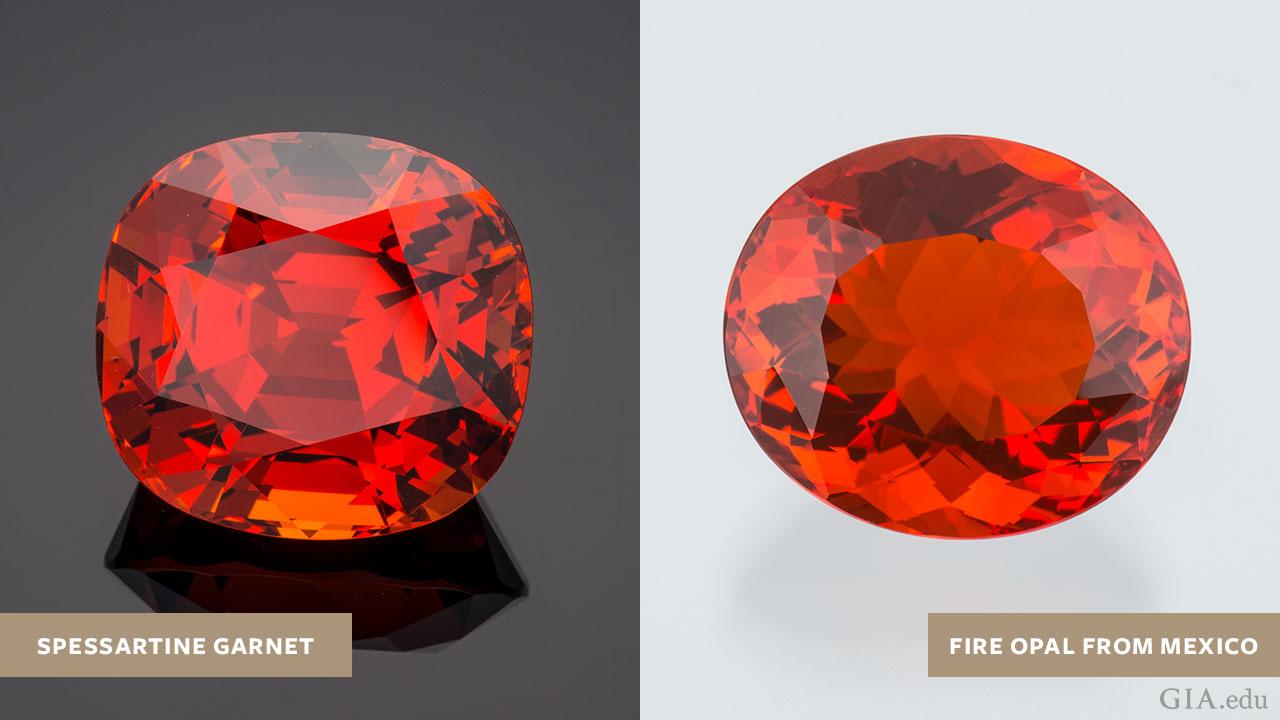 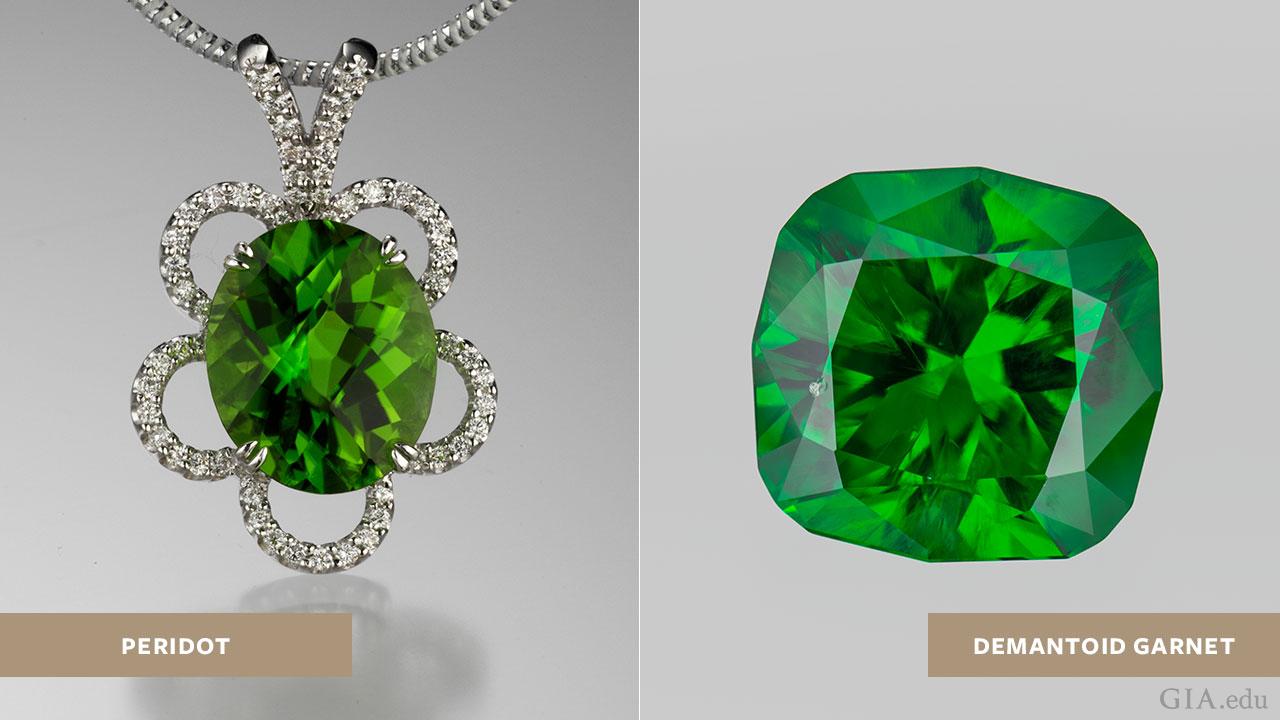 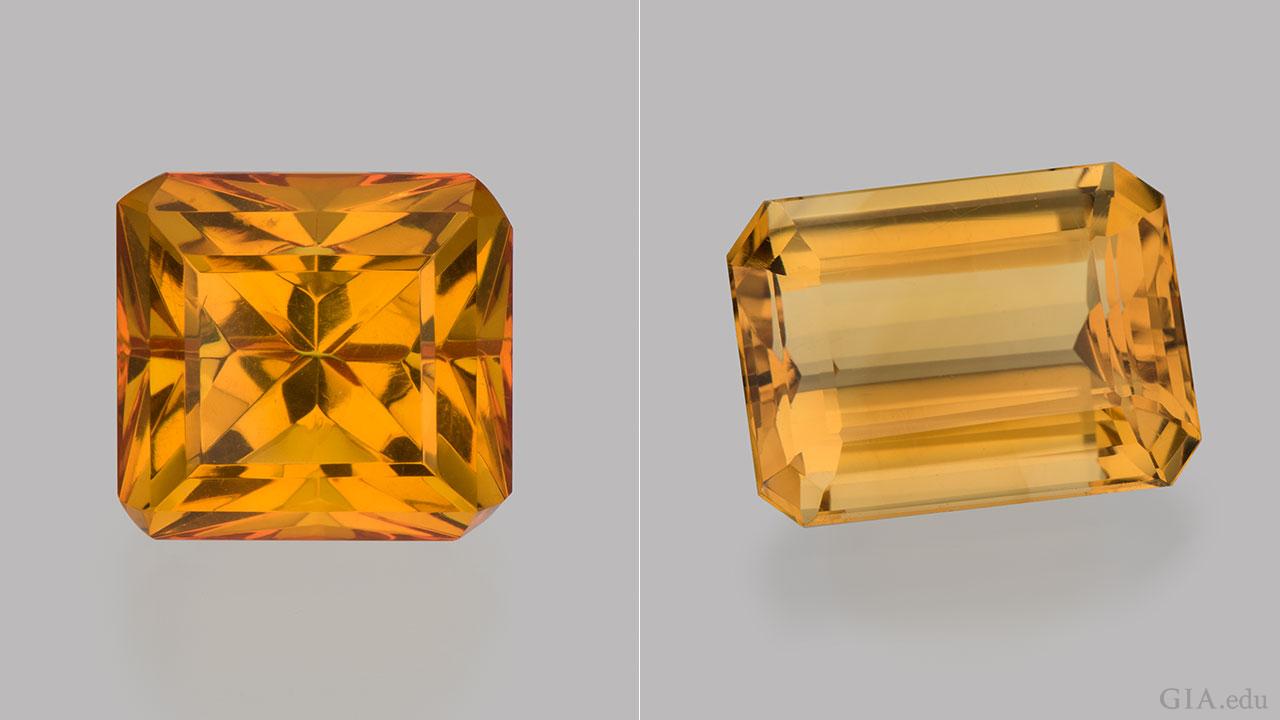 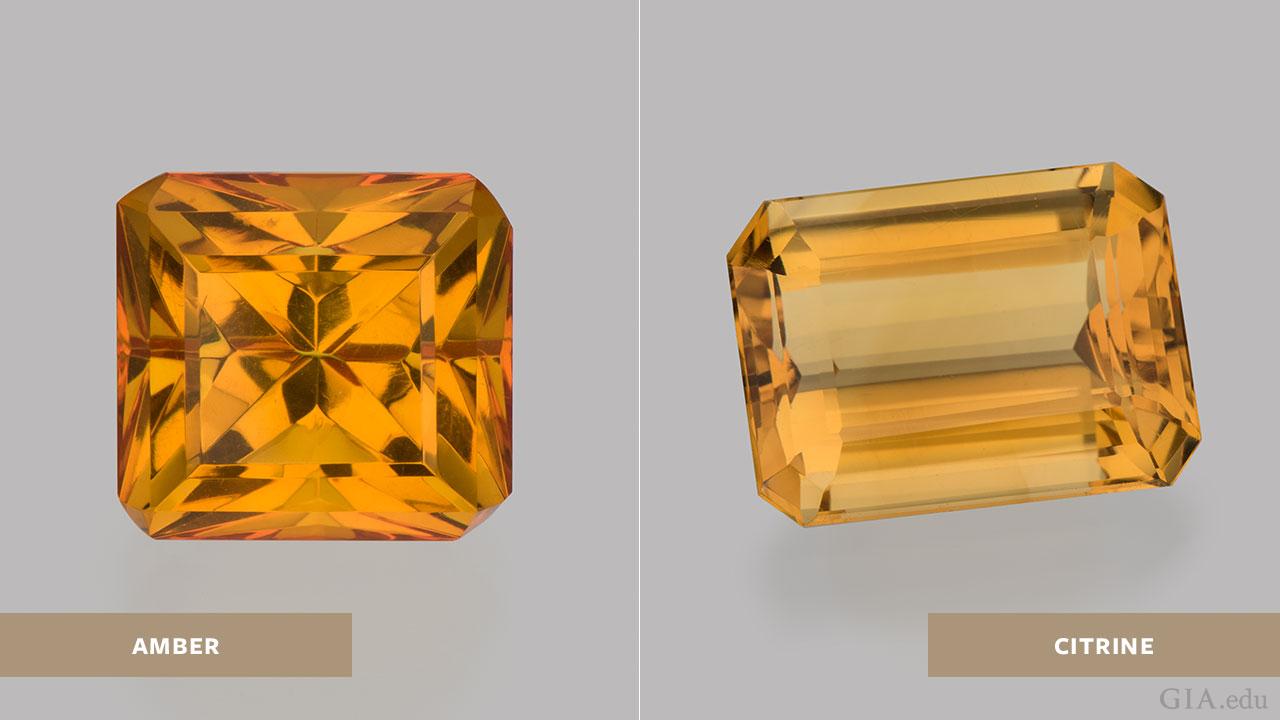 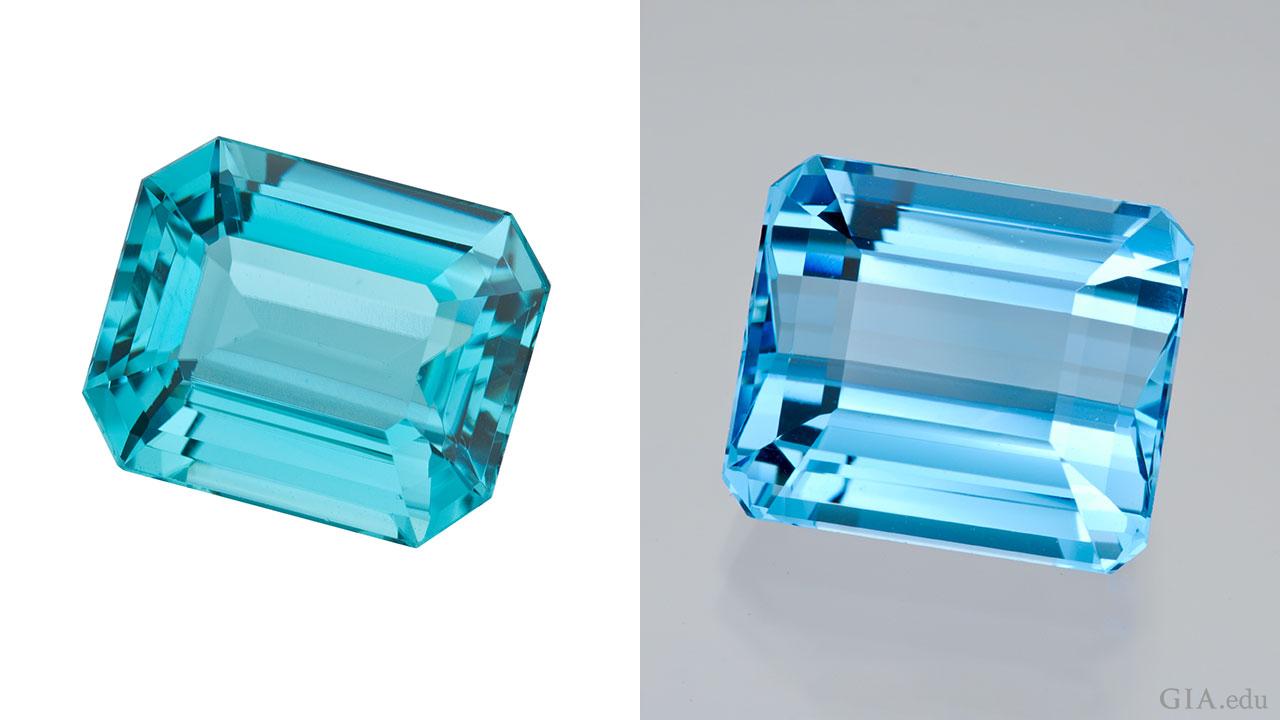 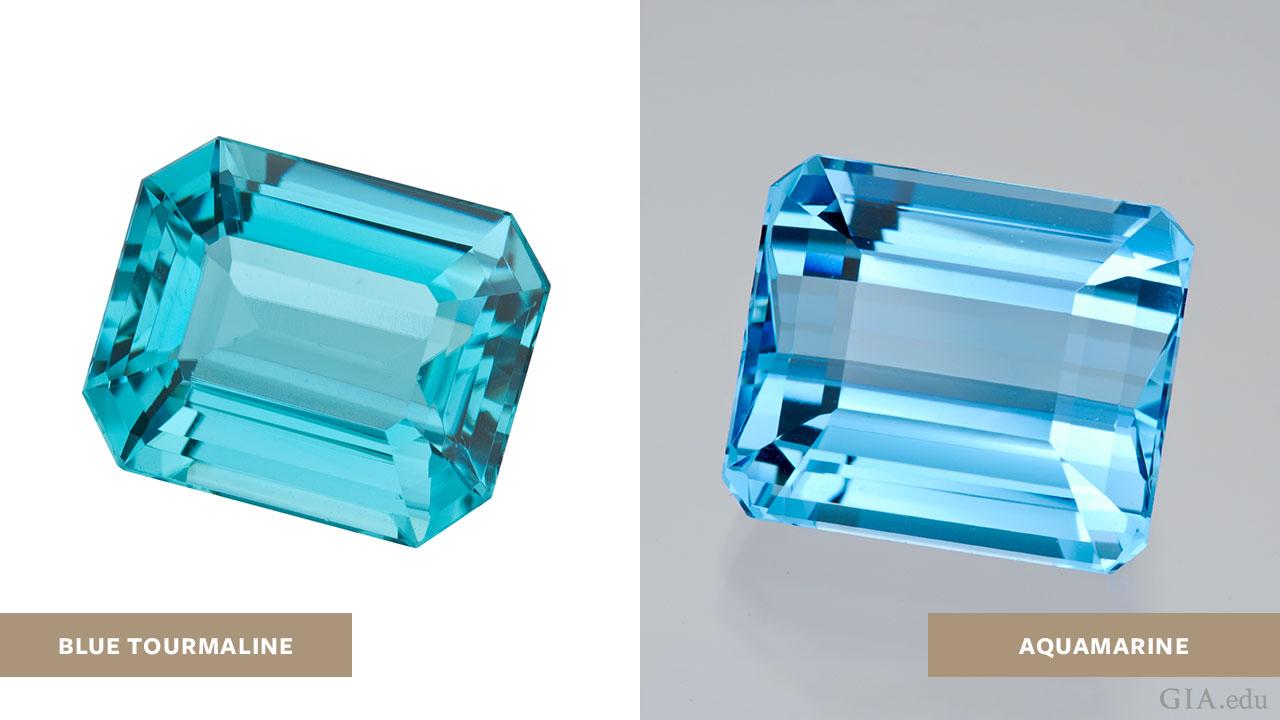 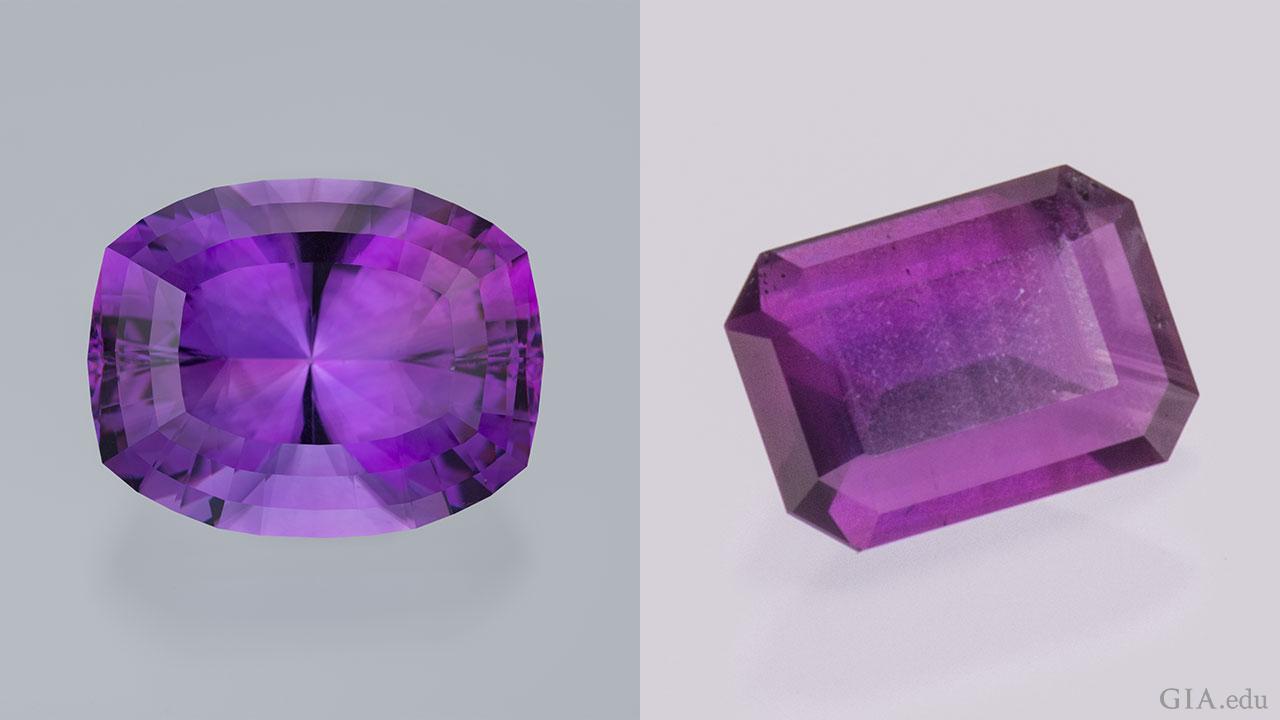 Colour Can Be Deceiving

There are many characteristics other than colour that can give clues to identification.

Separating peridot from demantoid garnet is easier if “lilypads” (unique disc-like liquid and gas inclusions found in peridot) can be seen under 10x loupe magnification.

Lustre and Opacity
Aventurine quartz and jade appear similar in colour, but a close inspection of lustre would reveal differences. Jade is dull in comparison to quartz’s vitreous nature.

Similar-looking transparent hard stones such as yellow sapphire, topaz, garnet and citrine quartz have a higher lustre when polished.

A trained eye can easily see the difference of light reflecting off the surface of the sapphire, which is bright and shiny. Soft stones like yellow opal and amber will be waxy to dull in appearance. Both yellow sapphire and topaz have vitreous lustre and are doubly refractive, so advanced testing would be required to identify these gemstones.

Hardness
Sapphire is very hard, registering 9 on the Mohs hardness scale; topaz and citrine are 8; opal is softer at 5-6½; and amber is the softest yet at 2. The amber’s heft is also noticeably lighter than other gems.

Although the instruments are simple, it takes a lot of practical observation and experience to become proficient at making separations. These principles are the foundation of modern gemmology and remain at its core today.