The world diamond industry continued to contract in 2019 in the wake of oversupplies and tightening credit, but the major auction houses still made headlines with extraordinary offerings. Retail jewellery sales held up as the world economy remained fairly strong, despite being buffeted by the US-China trade war.

Regardless of a decent 2018 Christmas season in the US, stocks of polished and rough diamonds continued to increase in 2019, causing the prices of both to fall to the point where De Beers and Alrosa, the two largest diamond producers, slashed their sales volumes by some 25%. In addition, rough prices declined by about 15% on average, especially in the second half of the year, according to a study by Petra Resources, a South African diamond mining company.

Prices and industry profits did not improve, so one of the industry’s leading lenders, ABN AMRO Bank, announced that it would no longer finance rough purchases for goods that cannot be cut profitably – that includes the majority of sizes and qualities below five carats.

ABN AMRO’s restrictions were stringent. It defined “profitable” sales as those that can achieve “real sales margins for goods sold as soon as possible after purchase of rough without considering credit terms”. The bank also said that clients wanting to use its rough buying credit facility need to apply on a case-by-case basis.

By November, total industry credit stood at about $8 billion (£6 billion), just over half of the total three years ago and $10 billion (£7.5 billion) lower than the peak of 2013. 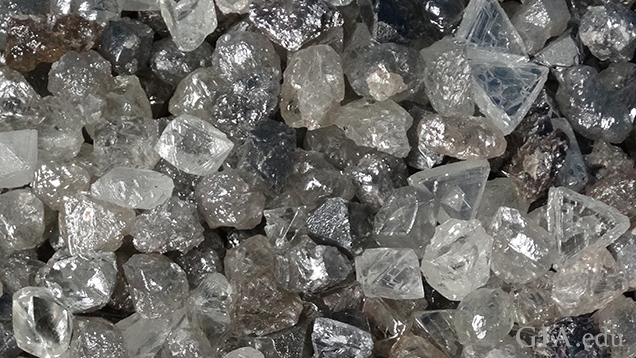 A group of unsorted rough diamonds from the Diavik Diamond Mine in Canada. Photo by Russell Shor/GIA

De Beers and Alrosa, which account for about two-thirds of the rough diamond market by volume and value, reported their rough sales were down about 25% through the first three-quarters of the year. Rough sales by Rio Tinto, the third largest producer, were down more than 15% through the same period, as the company’s diamond division reported a loss for the first half. In November, producers reported the supply situation was improving, with a pick up in demand from diamond manufacturers.

US watch and jewellery sales opened the year with 0.7% decline in January receipts and remained slightly behind 2018 for the first half of the year, according to US Department of Commerce figures. Third quarter demand, however, rose into positive territory, accelerating to a 6% increase in September, compared to the same month in 2018.

Signet Group, which owns Kay Jewelers, Zale and Jared, reported a 2.1% increase in same store sales in the third quarter after struggling with declines earlier in the year. Its online sales rose 11%. In addition, Signet is reducing by 50% the amount of jewellery it purchases from Chinese suppliers because of the increased tariffs on its products.

Tiffany & Co., which is in the process of being acquired by the French luxury group LVMH, reported flat sales for the quarter as reduced tourist traffic in the US has cut business at its flagship New York store and unrest in Hong Kong has deterred shoppers from commercial areas in that city.

In greater China, the protests in Hong Kong, which began in June, cut deeply into revenues. Chow Tai Fook, the largest jewellery retailer in the region, reported that its Hong Kong total sales were down 20% and 28% on a same store basis for the six months ending 30 Sept. Its same store sales on the mainland were up 1.9% for the same period.

In India, the declining rupee has deterred demand for diamonds and gold at retail.

The 2019 auction season was neatly divided into two distinct parts: Spring sales were devoted to history and design, while the autumn sales saw a return of the larger diamonds and rare fancy coloured diamonds that have been the houses’ mainstays for the past several years.

The spring auctions had fewer lots and fewer very large and top fancy colour diamonds than previous sales as prices eased from the record levels seen a few years ago. Auction executives were quick to point out that the market for high-quality gems and jewels remained robust for gems and jewellery with a historic past.

Rahul Kadakia, Christie’s international head of jewellery, said that April’s New York auction, which had no top fancy coloured diamonds (pink and blue especially) of over 5 carats or D flawless diamonds larger than 25 carats, “represented the current market”. In addition, a high percentage of lots came from estates, not dealers.

When the market weakens for major gemstones, the auctions have to become more careful, curating their sales to include smaller high-quality stones, more classic “signed” period jewels and more on estate pieces. Prices are usually less aggressive than those from dealers, Kadakia said.

Accordingly, the highlight of the spring auction season was Christie’s Maharajas & Mughal Magnificence jewels from the Al-Thani Collection in May.

The costliest piece in the auction was a Belle Époque-era Diamond Devant-de-Corsage brooch by Cartier that sold for $10.6 million (£8.5 million). This brooch, which contains several large Golconda diamonds, was made in 1912 for Solly Joel, one of De Beers’ founders. The largest diamond in the brooch was a 34.08 ct E VVS1 Type Ia pear shape; followed by a 23.55 ct D VVS2 oval (potentially flawless) Type IIa; a 6.61 ct D VS1 Type IIa marquise cut and a 3.54 ct E VS1 Type Ia heart-shaped diamond. All were graded by GIA.

The Catherine emerald, mined in Colombia over 250 years ago, sold for $4.3 million (£3.3 million) nearly $1 million (£750,000) above its high estimate, at Christie’s 15 May Geneva auction. The emerald, originally a 107 ct square cut, was acquired by Catherine the Great, the Russian monarch, around 1790 and passed through Russian royalty until 1920. The gem was recut in 1954 to remove inclusions. Photo Russell Shor/GIA

The most publicised lot of Christie’s 15 May Geneva auction was surely one-of-a-kind: The Imperial Emerald of Grand Duchess Vladimir of Russia, which originally belonged to empress Catherine the Great.

The emerald’s rich history started when it was acquired as a 107.67 ct square cut by Catherine the Great toward the end of the 18th century. It passed through Russian royalty after her death until Cartier purchased it in 1927. Cartier had the emerald recut into a pear shape of 75.63 cts to eliminate most of the fissures and inclusions, then sold it to John Rockefeller Jr. in 1954.

In the autumn season, demand and prices at the extreme top end strengthened. 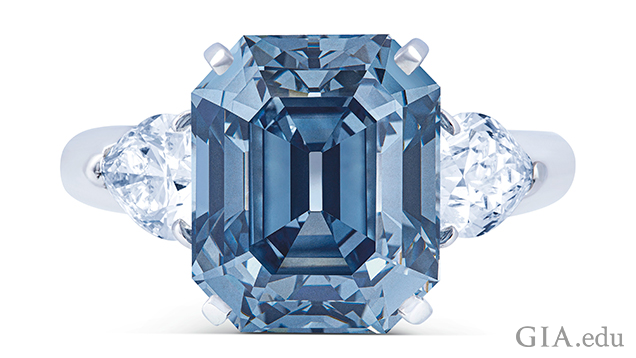 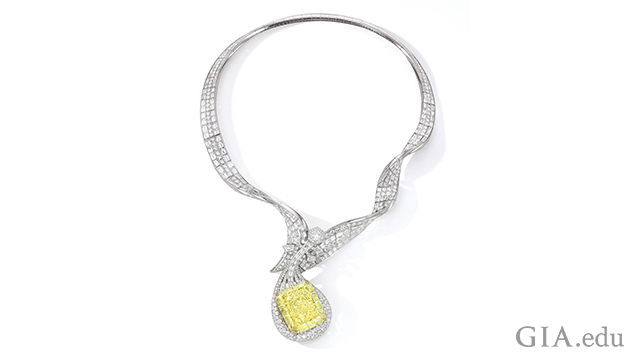 GIA alumna Anna Hu’s Dunhuang pipa Necklace sold for $5.8 million (£4.5 million) at Sotheby’s 7 Oct Hong Kong auction. The necklace design features a 100.02 cushion-shaped Fancy Intense yellow diamond showcased in the shape of a Chinese musical instrument – Dunhuang pipa – and embellished with variously shaped and brilliant-cut diamonds mounted in 18K white and yellow gold. The pipa can be detached and worn as a pendant/brooch. Photo by Michael Oldford. Courtesy of Sotheby’s

In addition, a jewelled piece designed by GIA alumna Anna Hu on commission from Sotheby’s, drew a winning bid of $5.8 million (£4.5 million) at the auction house’s 7 Oct Hong Kong sale. The necklace features a GIA-graded 100 ct Fancy Intense yellow diamond set in the shape of a Dunhuang pipa, a traditional four-stringed Chinese musical instrument that is depicted in an ancient mural in Dunhuang. 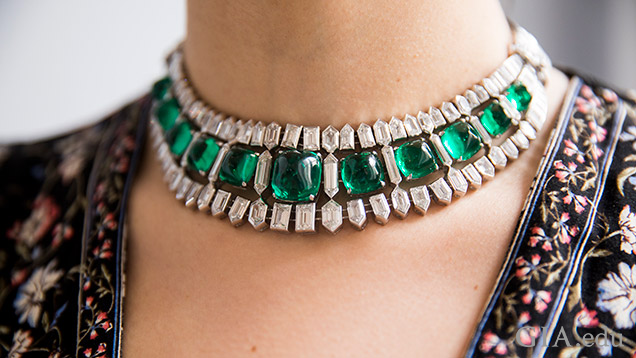 The Beaumont Necklace, a circa 1935 Art Deco emerald and diamond creation, presumably made by Van Cleef & Arpels for American socialite and collector Hélène Beaumont, sold for $3.6 million (£2.8 million) at Sotheby’s 14 May Geneva auction. Courtesy of Sotheby’s

There were a number of new diamond origin tracking services introduced at the JCK Las Vegas show in June. In addition to the GIA Diamond Origin Report, De Beers and Alrosa introduced their own mine-to-market diamond tracking; the Cullinan Diamond Report debuted as an identification system to track high-value, previously mined diamonds; and Sarine offered a service charting a diamond’s progress through the cutting processes.

The market for laboratory-grown diamonds continued to expand. About 50 companies exhibited at the JCK Show in Las Vegas, which was substantially up from last year, but prices were significantly lower ‒ 30% to 40% of comparable quality natural diamonds. This led to intense speculation about where this market was heading.

Forecasters like Bain & Co predict that laboratory-grown diamonds will account for about 15% to 20% of sales in five years, and this year they may have taken a big step towards that goal. Analysts estimate that about 2 million carats of laboratory-grown diamonds will be produced this year. Since companies do not reveal their sales, it is impossible to know how many of these reached consumers.