Those with November birthdays have two beautiful birthstones to choose from: topaz and citrine. Topaz comes in a rainbow of colours; citrine is prized for its charming yellow and orange hues. Both November birthstones are known to have calming energies while bringing fortune and warmth to the wearer. Most topaz and citrine birthstones are affordably priced, as good-quality gems are not as rare as for many of their counterparts. This means that those born in November have many options to choose from. Your challenge will be deciding which one to pick.

Some believe the word “topaz” comes from the Sanskrit word tapas, which means “fire”. Others trace it back to the Greek topazos. This November birthstone was long thought to have many benefits. The ancient Greeks believed that topaz gave them strength. From the 1300s to the 1600s, Europeans thought it could thwart magic spells and dispel anger. For centuries, many people in India have believed that topaz worn above the heart assures long life, beauty and intelligence.

The distinctly pinkish orange Imperial topaz has aristocratic cachet. It is commonly believed that the name originated with the Russian royal family’s insistence on keeping the finest colours of this gem, which was mined in Russia’s Ural Mountains, exclusively for their use. An alternate explanation, especially popular in Brazil, is that it dates from an 1881 visit by Brazilian Emperor Pedro II to Ouro Preto—the town closest to Brazil’s most productive topaz mines–and the gift of a reddish topaz to him. 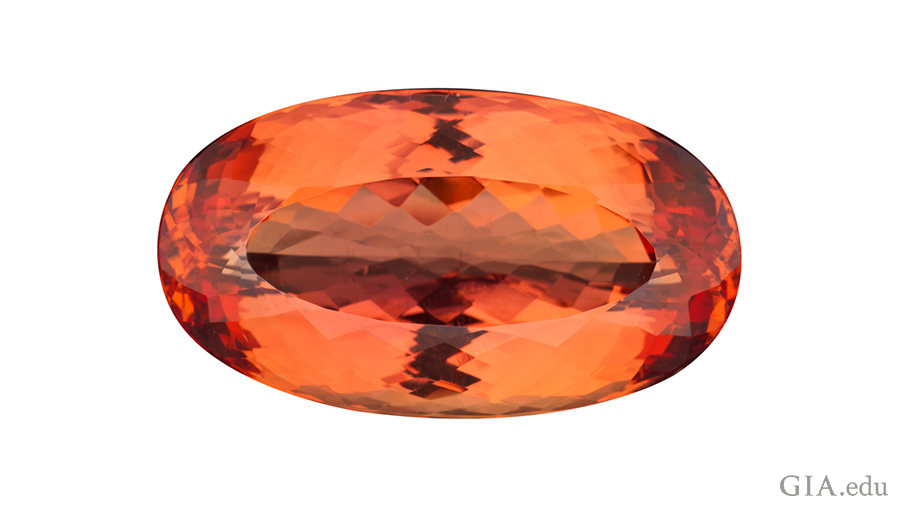 Where is Topaz Found?

Minas Gerais, a state in Brazil, is one of the most important sources for high-quality topaz, which has been mined there for more than two centuries. Yellow to orange, red, pink, violet and blends of red with orange or purple are some of the colours unearthed here. The nearby town of Ouro Preto is a fitting companion. In this UNESCO world heritage site, majestic colonial churches chequer the skyline and quaint cobblestone streets criss-cross the city.

North-western Pakistan is known for producing pink topaz. Ghundao Hill, close to the small town of Katlang, has been mined since 1972. The most sought-after shade of pink topaz from Katlang has a tinge of violet, which some in the gem trade call cyclamen pink. But even at Ghundao Hill, only rarely is this fine pink November birthstone found. 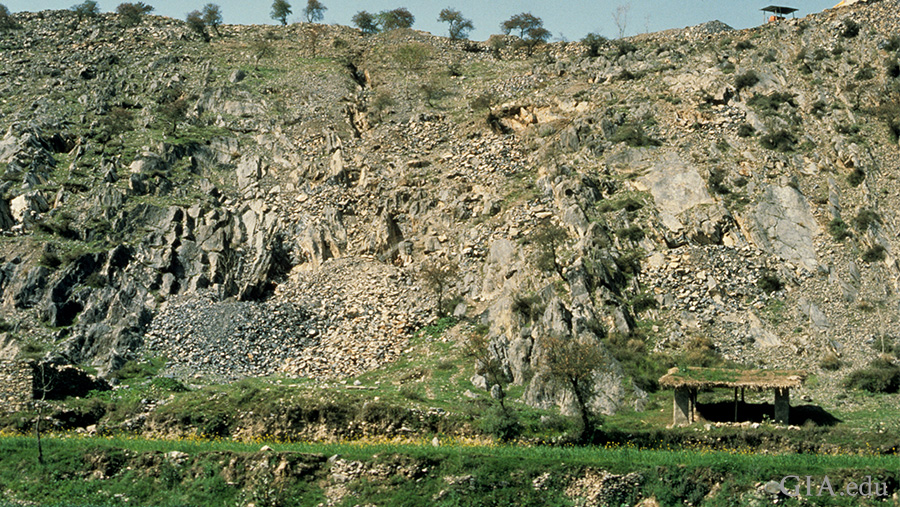 Topaz is an 8 on the Mohs scale of hardness, but it has poor toughness, so care is required to avoid chipping or cracking. To clean this November birthstone, do not use steam cleaning or ultrasonic cleaners. Warm, soapy water works best. High heat or sudden temperature changes can cause internal breaks in topaz. The birthstone’s colour is generally stable to light, but prolonged exposure to heat or sunlight might cause fading in some yellow-to-brown gems. Topaz may be affected slightly by some chemicals. 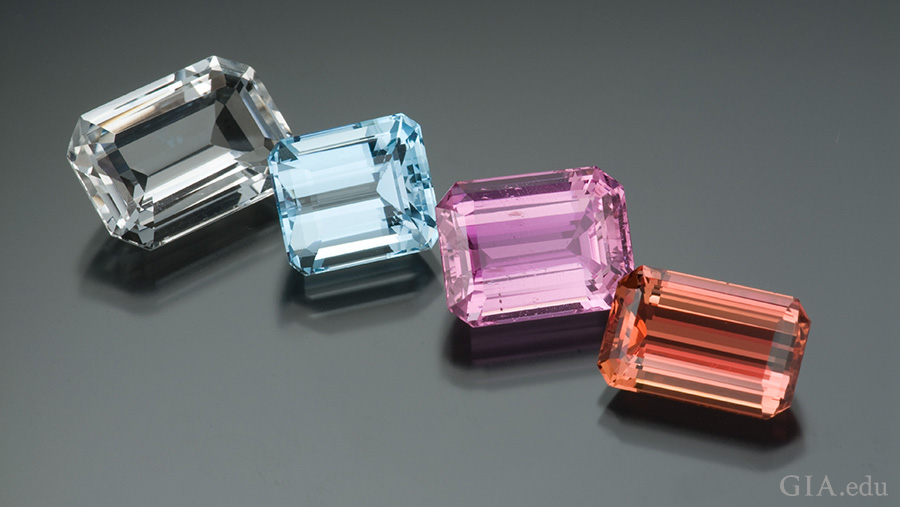 Here are some of the many colours of topaz. From left to right: a 9.21 carat (ct) colourless topaz from Nigeria, a 15.01 ct light blue topaz from Brazil, an 18.41 ct purplish pink topaz from Pakistan, and a 12.54 ct orange-red topaz from Brazil. Photo: Robert Weldon/GIA
More about Topaz Topaz Buyer's Guide

This November birthstone is the transparent yellow to brownish orange variety of quartz, which has been used in jewellery for thousands of years. Citrine has been a popular gemstone since ancient times and has shared a history of mistaken identities with the other November birthstone, topaz. As a result, people thought that citrine had the same powers as topaz. They believed that citrine could soothe tempers and calm the wearer.

The ancient Greeks carved rock crystal ornaments from it that glistened like permafrost. Roman pontiffs wore rings set with massive purple amethysts, and citrine has been reported in Roman jewellery. It was particularly popular in colourful Scottish jewellery from the Victorian era. Citrine, believed to derive from the French word for “lemon” (citron), is given for the thirteenth wedding anniversary.

Today, most of the citrine in the marketplace results from the heat treatment of amethyst. With its ready availability in a broad range of sizes, citrine is one of the most affordable and desired yellow gemstones. 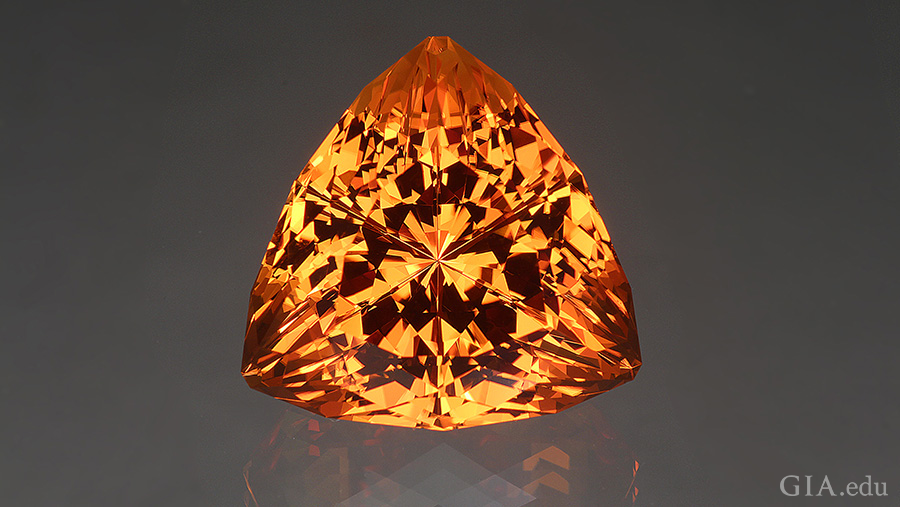 Where is Citrine Found?

The top sources for this November birthstone are Bolivia, Spain, Madagascar, Mexico and Uruguay. Amethyst that’s typically heat treated to a citrine colour is mined mostly in Brazil.

Deep in the world’s largest freshwater wetland lies Bolivia’s Anahí mine, an important source for natural, unheated citrine. Fields of wildflowers, brightly plumed birds, kaleidoscopes of butterflies, Howler monkeys and jaguars are some of the actors on this vast stage. The story of the mine is worthy of the setting. Discovered by a Spanish conquistador in the 1600s, it was given to him as a dowry when he married Anahí, a princess from the Ayoreos tribe of Paraguay. The mine was lost for three centuries until it was rediscovered in the 1960s. 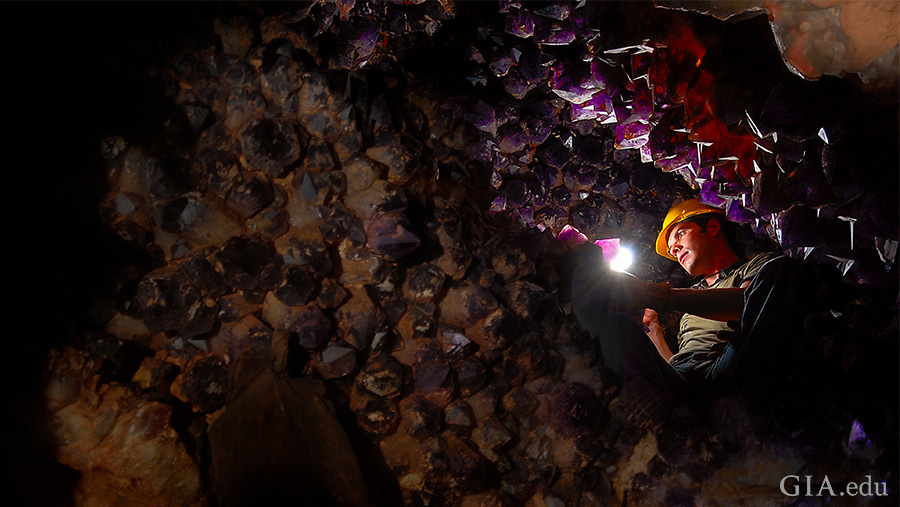 Thousands of crystals of both purple amethyst and yellow citrine have been recovered from the Anahí mine in Bolivia. Photo: Robert Weldon/GIA

The Anahí mine produces a unique combination of amethyst and citrine in the same crystal; when the two colours appear together in a fashioned gem, it is known as ametrine. The citrine produced at the Anahí mine typically ranges from orange-yellow to brownish/greenish yellow. 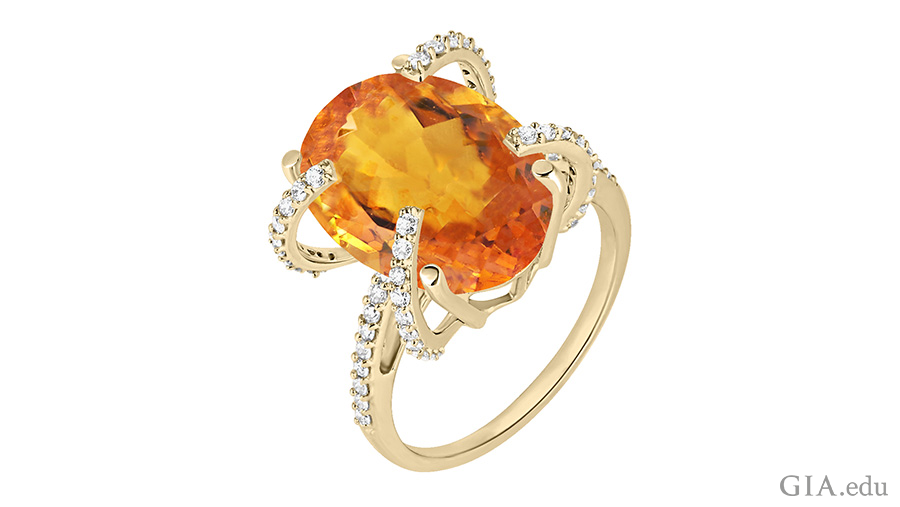