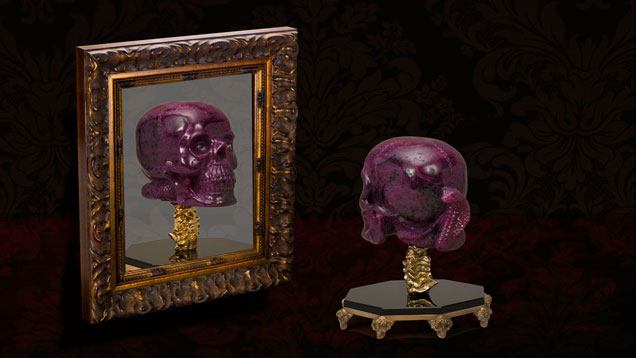 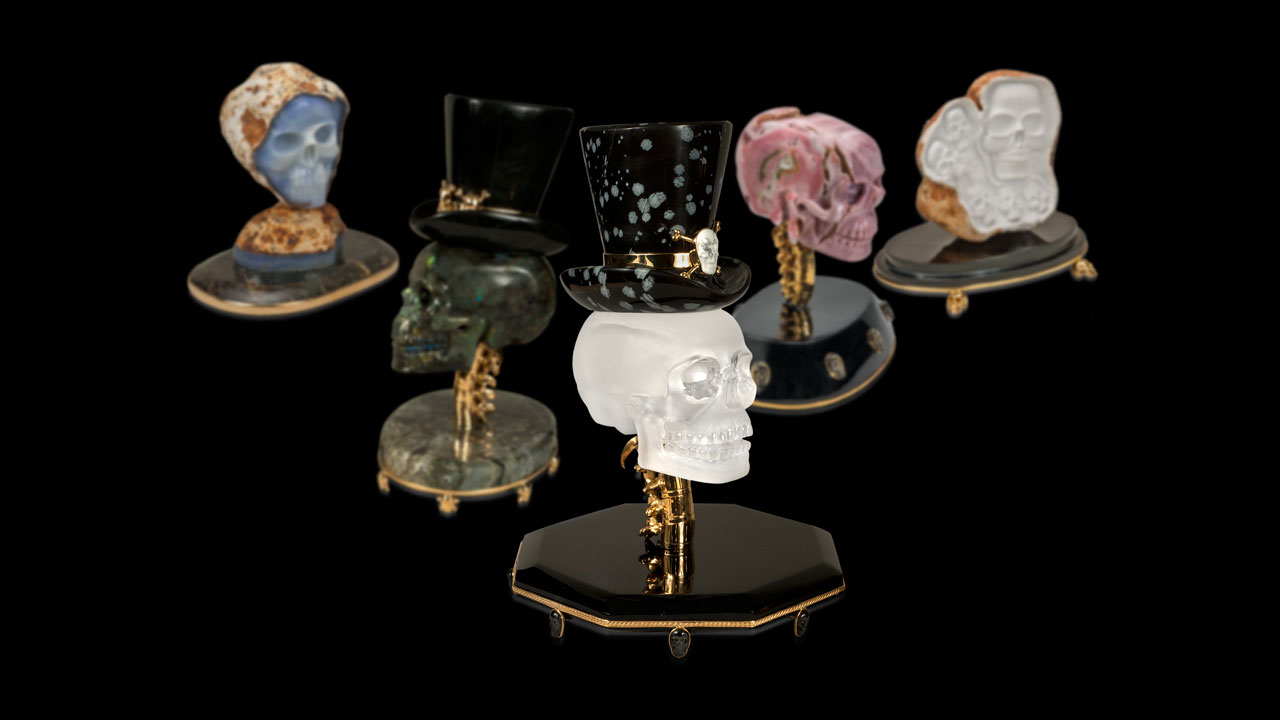 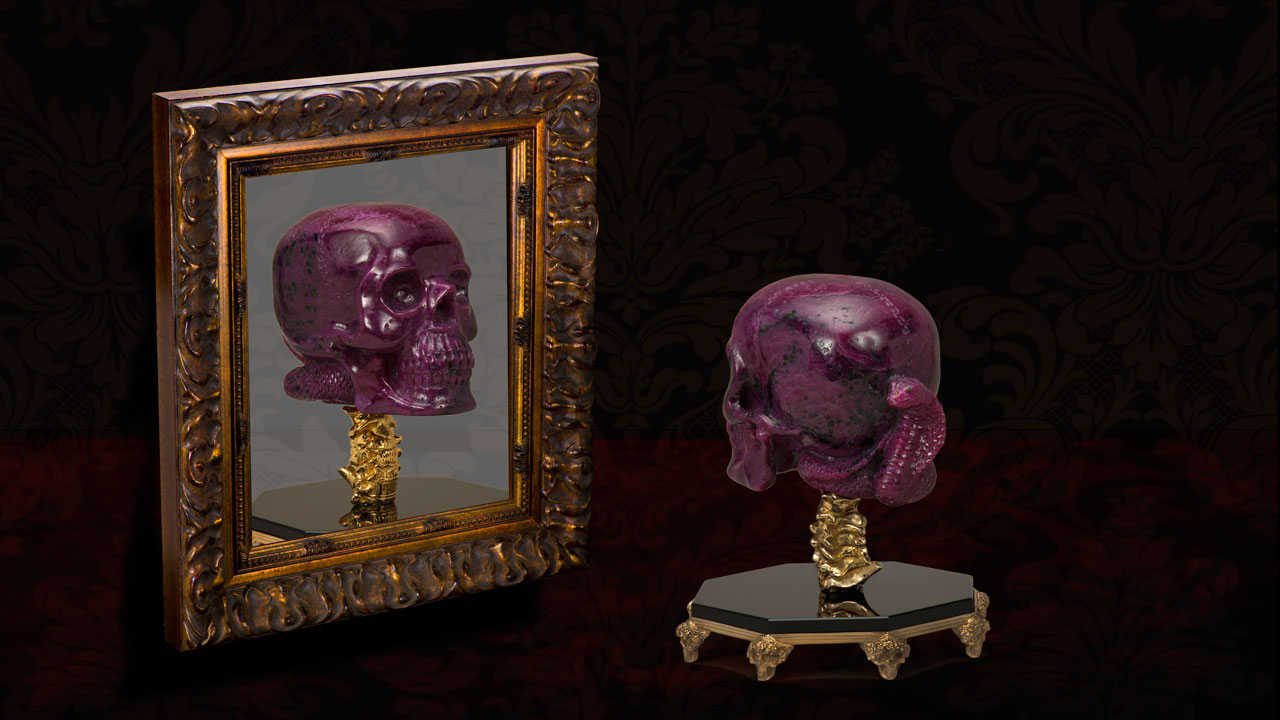 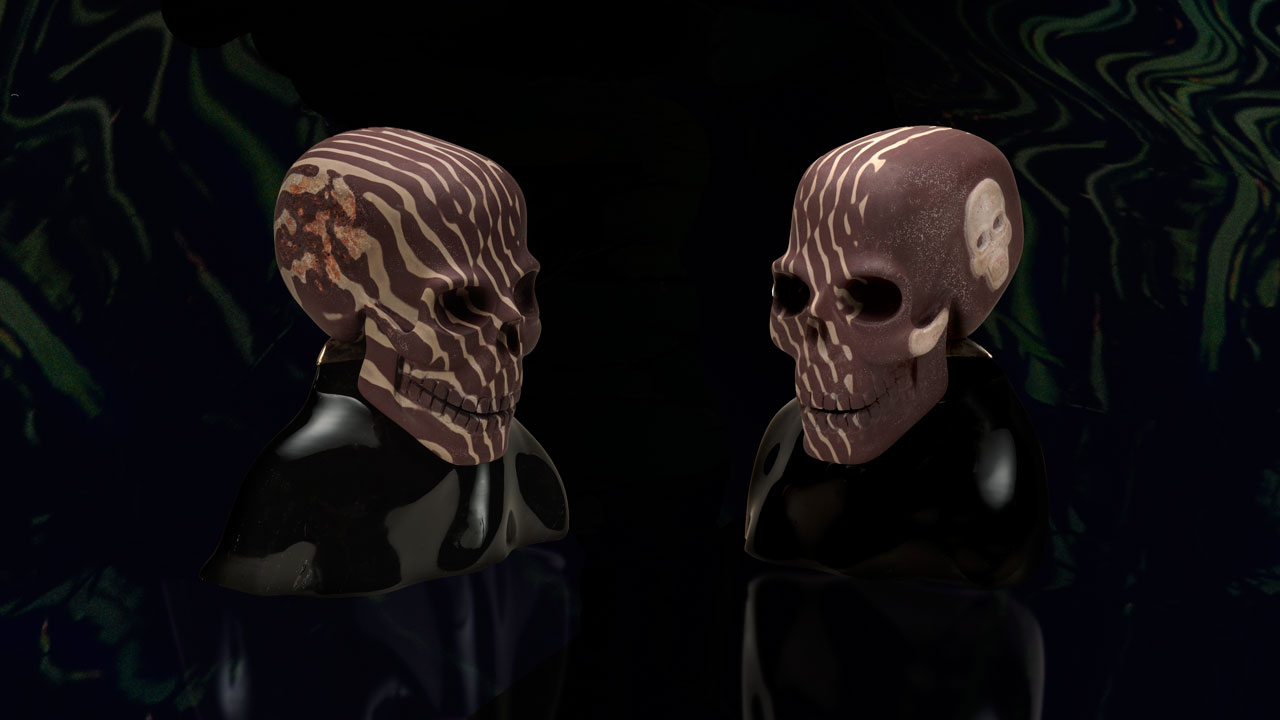 Human skulls, long a symbol of death or danger, have been a popular jewelry icon for decades, but gem carver Luis Alberto Quispe Aparicio has taken the concept of the skull as décor to a whole new level.
“I personally see it [the skull] as a symbol of eternity,” he said. “It is a sign of man's mortality; a victory of death over life. I thought to myself, ‘Why don't we try giving some life to them? Maybe even personality and character!’ I wanted to show that skulls could also be alive and fun.”
That was the genesis of a 26-piece collection of carved gemstone skulls he created to last forever. A selection of them is on display through April 2014 at GIA’s Carlsbad campus in California.
“These skull sculptures are different from any other objets d’art we’ve had on display before,” said Jana Miyahira-Smith, a subject specialist for GIA Education. “They are edgy and avant garde – they show we are not bound by convention in our museum displays.”
Duncan Pay, editor-in-chief of Gems & Gemology, said many vendors at this year’s Tucson gem and mineral shows had small, rock quartz skulls on display earlier this year, but said Aparicio’s were at a totally different level, especially with the combination of materials used.
“Aparicio’s skulls whimsical and fun,” Pay said. “He has an eye for the strange.”
Carving a New Tradition for the Family Business
Aparicio said the skull sculptures were a way he could blend the lapidary art work and metalsmith skills he learned in his family’s gemstone carving business in Lima, Peru.
Aparicio and his sister Sylvia, a goldsmith and jewelry designer, grew up surrounded by artists, master carvers and jewelers who visited their father’s art studio. The siblings traveled to gem and mineral exhibitions around the world for more than 20 years, soaking up the work of many artists. This multi-cultural exposure helped them to develop their own artistic forms and techniques.
An engineer by profession, Aparicio creates objets d’art for Neoart Peru, the company their father created in 1968. The brother and sister have revived the business with a specialty in ruby carvings and natural wildlife-inspired themes that use rare and unusual gemstones from around the globe.
Aparicio spent several years collecting rough from around the world once he had the idea for the skull sculptures. Each chunk of rough needed to be large enough to create a skull and visually appealing to ensure the finished piece was attractive and interesting.
“Every stone has its little secret,” Aparicio said. “It could be revealed in the cutting, carving or polishing ‒they all need special skill to be well-carved. That is the fun part, it becomes a challenge.”
Aparicio spent one to three months each of the skulls, depending on the material used and the intricacies of the details. The exception was the ruby skull, which took three times longer because of ruby’s exceptional hardness. It is essentially an eight-step process from design to cutting and carving to polish. Each piece is a result of sculpture, metalsmithing and jewelry-making techniques.
Details Bring Skulls to Life
“The skulls collection was one of my favorites to create,” said Aparicio, who spent a year designing and carving them. “By carving natural gemstones with a combination of lapidary art and metalsmithing techniques, you can really see how the colors and textures in the various stones bring each piece to life.”
Nathan Renfro, lead analytical specialist in GIA’s Carlsbad lab, said it’s clear that each piece has its own character.
“There are a lot of details in the stands and accessories that go with each skull,” Renfro said. “The subtle details in the accent pieces give each one their own personality.”
The skull collection is a special treat for students Miyahira-Smith said.
“I think the students are really going to like them,” she said. “They are a good reminder of the many different ways the materials they are studying here can be fashioned.”
About the Author

Creating a Face for Eternity

Listening to the Stone

Luis Alberto Quispe Aparicio describes how he finds inspiration for his gem carvings in each stone.