U.S. employment figures continue to rise along with the stock market – and other economic indicators remain strong – but Signet Group’s latest lower results continue to point to a “challenging” retail environment. Signet is the largest jewelry chain in the U.S. and other large retail jewelers are seeing sales decline as well.

So, what are the issues here?

Signet’s CEO Mark Light spoke of weakening traffic in shopping malls, where nearly all of its stores are located, and a move to “omnichannel” retailing, which includes physical stores, online shopping and mobile phone/tablet buying. Signet’s online sales are down as well, however, and Blue Nile, which is expected to report later this month, may show stagnant or a decline in sales.

Economists, both liberal and conservative, recognize that the decline in middle class purchasing power is directly affecting some consumer products – and jewelry is one of those categories. This trend is accelerating, they note, because millennials are making less money than the previous generation at this point in their lives. In jewelry, retailers serving the top end of the market generally have kept their numbers up and brands like Pandora are seeing large sales increases in the lower end. This is what drove the 3.8% increase in overall jewelry sales for 2016 that the U.S. Department of Commerce reported.

In addition, diamond producers and other segments of the industry are trying to develop marketing campaigns designed to appeal to a millennial audience, which is besieged by competitive products and experience-oriented (travel, dining) opportunities, with incomes that have not kept pace.

A fairly positive Hong Kong show this month lifted the spirits of the diamond trade and helped keep prices firm for most categories of polished stones. While there was some downtrading and discounting, Chinese retailers have reported demand improving after a long slump.

De Beers remains optimistic and its $545 million February cycle (sight) saw prices slightly higher on average with few deferrals. Its January sale of $727 million was the highest in several years. Alrosa sold $390 million worth of rough and $12 million in polished during the same period, saying “demand appears to be stable.”

Both DeBeers and Alrosa noted that the results of the Hong Kong Show give reasons for optimism.

The upcoming Baselworld Fair should provide a bellwether for the luxury market; the early June JCK Show in Las Vegas will be a good indicator of the U.S. market.

GIA’s lab in Mumbai flagged more than 100 synthetic melee diamonds in a parcel of 323 stones in early March, which brought home trade concerns that parcels of melee that normally do not go through grading labs could contain synthetic stones.

Dr. Wuyi Wang, GIA director of research and development, said that the Melee Analysis Service launched in December has regularly identified small numbers of synthetics mixed into parcels. This, however, is the first time that such a large percentage of man-made material was identified. 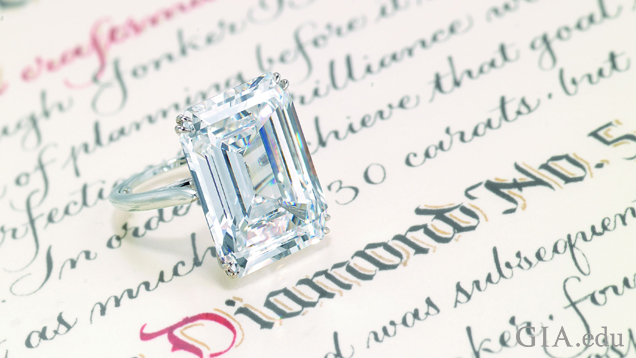 The Jonker No. 5 diamond – to be auctioned by Christie’s on May 30 – is a key part of a legendary collection of diamonds from the world famous 726 carats Jonker rough, discovered by Jacob Jonker in 1934. Photo courtesy of Christie’s Images

Christie’s will auction the 25.27 ct Jonker V in Hong Kong on May 30. It is the fifth largest diamond from a piece of rough that made headlines when it was found 93 years ago.

The 1934 discovery of a 726-carat diamond in South Africa by an artisanal miner named Jacob Jonker made world headlines that followed the diamond to New York, where it was purchased by Harry Winston. Winston entrusted the job of cutting it to the master diamond cutter Lazare Kaplan, who studied the diamond for several months before attempting to cleave it, according to a 1936 article in National Geographic Magazine.

At the moment when Kaplan was about to strike the first blow, he noticed a slight bend in a surface crack that told him his calculations were wrong. After recalculating, he successfully cleaved the diamond into 13 stones – including the 25.27 ct diamond that Christie’s will auction.

The D, VVS1 diamond, graded by GIA, is a rectangular cut and is conservatively estimated to sell for between $2.2 million and $3 million.