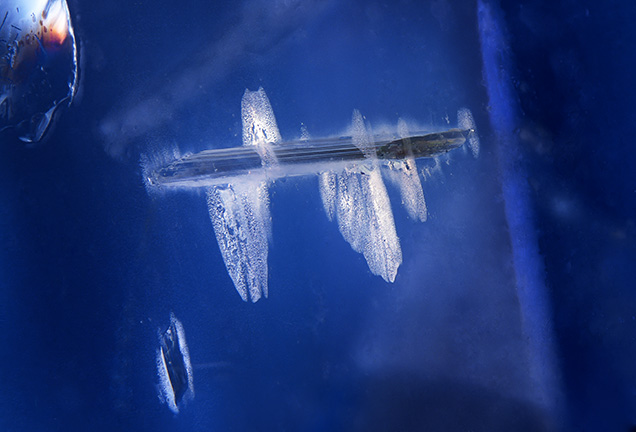 The main inclusion features, the pargasite crystals (figure 2), were transparent with a brownish green bodycolor. Many of them were doubly terminated with a flat, columnar prismatic morphology with striations along their length, surrounded by halo- or rosette-like thin reflective films. The pargasite crystal’s surface pits and altered appearance suggested that these pargasite crystals were protogenetic inclusions present in the pegmatitic growth environment before the sapphire began to form. Raman microspectrometry analysis (figure 3) confirmed the identity of several crystal inclusions as pargasite.

The absence of 3309 peak series in IR spectroscopy and the microscopic observation of unaltered internal features supported an unheated call. The classic metamorphic UV-Vis absorption spectra, the metamorphic-type low-Fe chemistry data collected with Laser ablation–inductively coupled plasma–mass spectrometry (LA-ICP-MS), and the observed inclusion scene supported a Kashmir origin conclusion. The issued GIA report identified the stone as a natural sapphire from Kashmir with no indications of heating.

Pargasite was once thought to be unique to Kashmir until it was found in sapphires from other countries. Nonetheless, pargasite inclusions are a strong indicator of Kashmir origin. With the support of advanced analytical instrumentation (UV-Vis and LA-ICP-MS) in addition to careful examination of the overall internal features (milky bands, ladder-like stringers, and snowflakes), the presence of pargasite inclusions can conclusively determine a Kashmir origin.

Jonathan Muyal is a research stone collection gemologist at GIA in Carlsbad, California.

The locality origin of natural-color blue sapphires from Kashmir can, in many cases, be positively identified.