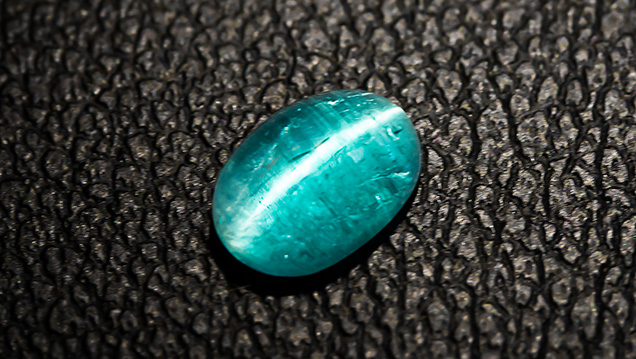 A vivid shade of tourmaline varying from “neon” blue to greenish blue, caused by copper and manganese, was discovered in Brazil in the 1980s. Recognized as “Paraíba” tourmaline in the gem trade, it is still highly sought after, even though tourmalines exhibiting this “Paraíba” color are now more accessible from localities such as Nigeria and Mozambique.

Recently, GIA’s Bangkok laboratory received a vivid blue tourmaline with chatoyancy (figure 1), weighing 0.51 ct and measuring 5.89 × 4.19 × 2.46 mm. Standard gemological testing resulted in a spot refractive index reading of 1.64 and a specific gravity of 3.05. Microscopic examination revealed diagnostic irregular two-phase inclusions, trichites, and acicular (needle-like) features. The sharp cat’s-eye effect was caused by an included layer of fine parallel growth tubes positioned just above the base of the cabochon. The phenomenon of chatoyancy enhances its rarity and value.

Cat’s-eye Paraíba tourmaline is not new, though fewer than 10 have been submitted to GIA laboratories. The combination of well-developed chatoyancy, transparency, pleasing vivid blue color, and Brazilian origin make this a rare and noteworthy gemstone.

Vararut Weeramongkhonlert is a staff gemologist at GIA in Bangkok.

An Update on “Paraíba” Tourmaline from Brazil

Vivid blue, green, and purple-to-violet cuprian elbaites, renowned in the gem trade as “Paraíba” tourmalines, continue to be recovered in small amounts from northeastern Brazil.

Gem-quality bright blue to green “Paraíba”-type Cu-bearing tourmaline is now known from deposits in Africa (Nigeria and Mozambique), in addition to three commercial localities in Brazil (in Paraíba and Rio Grande do Norte States).