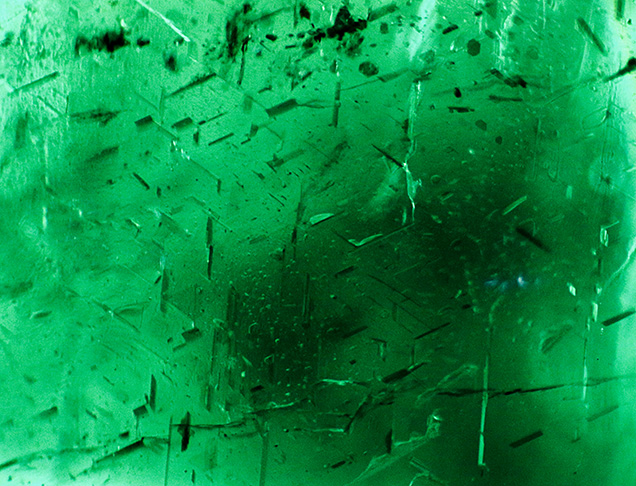 Figure 2. Platy inclusions in the emerald in three directions, intersecting at 60/120 degree angles viewed along the c-axis. Photo by Yujie Gao; field of view 2.8 mm.

Figure 3. Top: The hexagonal inclusions in the basal plane are parallel to the orientation of the platy inclusion described in figure 2. Field of view 3.1 mm. Bottom: A thin layer exhibiting growth lines is perpendicular to the emerald’s c-axis. Photos by Yujie Gao.

The stone showed interference colors when placed under a polariscope with the bottom facing up. With a conoscope, the optic axis of this emerald was determined to be perpendicular to the bottom. Using the microscope, we found thin platy inclusions arranged in three directions intersected with each other at 60/120 degree angles (figure 2). Those inclusions were mainly dark brownish and transparent with well-formed rectangular shapes, some of which exhibited a light bodycolor resembling an unhealed fracture. Evenly distributed reflective light could be seen at certain angles. We deduced that those inclusions had relatively smooth surfaces, which means that their original crystal faces were not corroded during the emerald’s formation. Further observation revealed hexagonal inclusions in the basal plane. Owing to uneven development during their crystalline formation, several of them were nearly triangular in shape. Their sides were parallel to the direction of the platy inclusions (figure 3, top). We also found distinct growth lines near the bottom of the sugarloaf perpendicular to the c-axis. These platy inclusions appeared to be concentrated sparsely in a thin layer with a thickness around 1.5–2.0 mm, as shown figure 3 (bottom). The sparseness of the oriented inclusions resulted in the absence of asterism or cat’s-eye phenomena.

Figure 4. Proposed illustration of hexagonal inclusions in the basal plane and platy inclusions along the prismatic faces. Illustration by Yujie Gao.

Considering the optic axis, we concluded that the platy inclusions grew along the hexagonal prismatic emerald faces, with the hexagonal platy inclusion parallel to the basal plane, as illustrated in figure 4. However, it is still unclear whether they were syngenetic or exsolution, since their well-preserved shapes showed little evidence of corrosion and there was insufficient evidence of exsolution.