Dyed purple opals first appeared in the gem trade in 2011 (N. Renfro and S.F. McClure, “Dyed purple hydrophane opal,” Winter 2011 G&G, pp. 260–270). Recently, the authors became aware of similar material with vibrant blue and pink bodycolors (figure 1). From 2015 to 2017, a jewelry designer reportedly purchased over 500 carats of vivid pink and blue opals from a dealer she met at a small regional gem show in California. The dealer did not disclose that the material was dyed and claimed that these intense colors were from a new opal discovery in Mexico. This kind of misrepresentation could damage consumer confidence in all opals.

In July 2017, author EB received the two opals in figure 1 for examination. After determining that they were likely color treated, he sent both samples to GIA’s Carlsbad lab for further testing. With permission from the owner, each opal was cut in half to obtain a control sample and a test sample. The test samples (one blue and one pink) were soaked in acetone and hydrogen peroxide solutions to determine if their colors were stable. These two opals were carefully examined and, like the dyed purple material from 2011, were consistent with hydrophane opal from Ethiopia that had been dyed. Both stones displayed a “digit pattern” play of color (B. Rondeau et al., “On the origin of digit patterns in gem opal,” Fall 2013 G&G, pp. 138–146). They also showed small spots of saturated color at the surface, consistent with dye (figure 2).

Figure 2. Both the blue and pink opal showed dye color concentrations around pits and scratches on the surface, consistent with hydrophane opal that has been artificially dyed. Photomicrographs by Nathan Renfro; fields of view 2.34 mm (left) and 1.99 mm (right).

Both stones were soaked in acetone to collect some of the dye material for color spectroscopic analysis. The acetone with residual dye was measured and artificially concentrated by a factor of 20 by multiplying the very low absorption values measured. The measurements produced a spectrum consistent with an organic dye, characterized by broad band absorption features in both the pink and blue samples (figure 3). The absorption measurements were then converted to transmission spectra using GRAMS/AI spectroscopy software by Thermo Fisher Scientific. Color space coordinates were calculated from the transmission spectra and plotted as a color swatch. The hues produced were consistent with the bodycolor of each opal, confirming that the spectra represent the organic dye component (figure 3, inset). 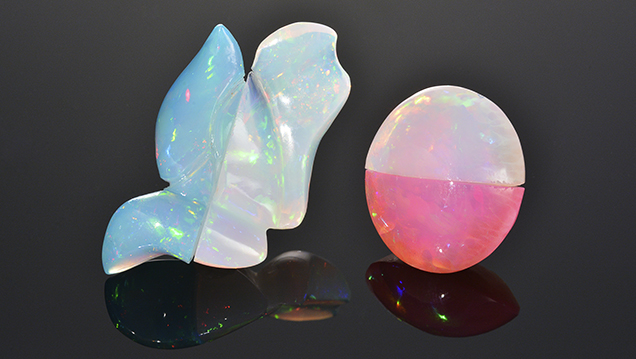 Figure 4. The blue and pink opals were confirmed to be dyed hydrophane opal, likely from Ethiopia. Half of each stone has been bleached using 3% hydrogen peroxide solution. Photo by Robison McMurtry.

The two samples were further tested to see if they could be restored to their original non-dyed state. As reported by Renfro and McClure (2011), soaking dyed purple opal in a solution of hydrogen peroxide removed the purple color. These new pink and blue samples were sliced in half and one piece of each sample was soaked in 3% hydrogen peroxide for up to two weeks. Their color saturation was significantly reduced, with the blue half turning white and the saturated pink half becoming very light pink (figure 4). It is possible that more time in the solution would have further reduced the pink color. Note that even though the samples lost their color, the dye molecules were not removed. But the hydrogen peroxide had oxidatively decomposed the dye into different molecules that did not absorb visible light and therefore could no longer impart color on the opals. Soaking dyed stones in hydrogen peroxide may be an effective way to remove the observed color in dyed opals, returning them to their natural appearance. In our experience, however, there is a risk of cracking when any hydrophane opal is immersed in a liquid.

Acetone allowed the removal of enough dye for spectroscopic analysis, proving that the coloring agent is an organic dye. While soaking the opals in acetone did not seem to greatly affect their color, soaking them in a hydrogen peroxide solution for several weeks removed the artificial color almost entirely. Upon further examination, we determined that they were originally hydrophane opals with a white bodycolor, likely from Ethiopia, that were color treated using an organic dye. These findings reaffirm the importance of treatment disclosure in the trade. A few unscrupulous industry members could compromise the reputation of dealers selling natural opal as well as those properly disclosing treated material to their customers.

Edward Boehm is the owner of RareSource in Chattanooga, Tennessee. Nathan Renfro is manager of colored stones identification at GIA in Carlsbad, California.

An examination of the finger-like feature mostly found in Ethiopian opal, and proposal for its formation.

Opals with an unusual purple bodycolor and strong play-of-color have recently appeared in the market.