Northern Mozambique (figure 1) has gained attention for its rubies since a major discovery near Montepuez in 2009 (see McClure and Koivula, 2009; Pardieu and Lomthong, 2009; Pardieu and Chauvire, 2012; Pardieu et al., 2009, 2013; Hsu et al., 2014). Until the arrival of Gemfields in 2012, nearly all the production from this deposit came from unlicensed miners, known as garimpeiros. Between 2012 and 2016, Gemfields became a force in the ruby trade, supplying the market through regular auctions in Singapore and Jaipur. In 2016, two new players acquired ruby mining licenses around Montepuez: Mustang Resources and Metals of Africa. During a summer 2016 GIA field expedition, we visited these new sites. We also spent time at the Gemfields operation, in order to follow the development of what is already the world’s largest ruby mine. We also visited an interesting new pink spinel and tourmaline deposit near Ocua. 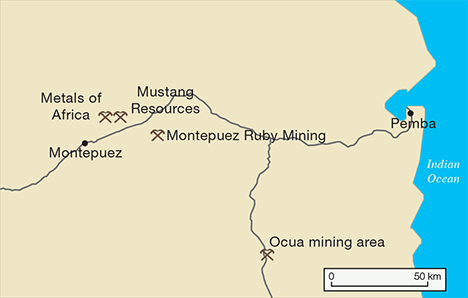 MRM. In 2011 Gemfields and its local partner, Mwiriti Lda., created Montepuez Ruby Mining (MRM) and started a large-scale mining operation near Montepuez the following year. Over the past four years, MRM has established a solid foundation and secured their operations, and now they are preparing for a significant expansion. Within their initial 360-square-kilometer concession, there are already four main ruby deposits: Mugloto, Ntorro, Maninge Nice, and Glass. MRM recently acquired additional exploration licenses for areas surrounding their first licenses and now has exploration rights over a huge expanse of about 1,000 square kilometers.

The secondary deposit at Mugloto (figure 2) is currently MRM’s main source of high-quality rubies. Many of Gemfields’ highest-priced gems are from this pit, including the Rhino and Dragon Eye rubies. Mining started in this pit in 2013. It consists of a gravel bed with a thickness of 20–120 cm, located at depths between 4 and 7 meters. Rubies are found in the slightly undulating gravels and are usually concentrated in zones with higher clay content. Rubies from this deposit are typically well rounded and medium to dark red, usually with some orangy tones and weak to medium fluorescence (figure 3). This site has not been worked extensively by unlicensed miners, but we were able to see some artisanal shafts. At the time of our visit, the main Mugloto mine (pit 3) measured an astonishing 350 by 1,000 meters, and MRM is actively expanding this pit. The total area that contains the ruby-bearing gravels is estimated to be over 5 km long. Some parts of the Mugloto mining area have already been restored and converted into plantations.

Figure 2. The ruby-bearing gravel bed in Mugloto. The wooden structure is the entrance to a tunnel abandoned by unlicensed miners. This section is about four meters high. Photo by Wim Vertriest/GIA. 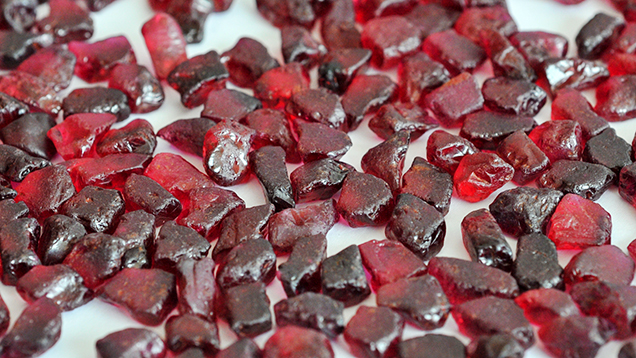 Figure 3. These rubies from the Mugloto pit represent MRM’s main production at the moment. The stones are typically well rounded and medium to dark red, often with some orangy tone and a weak to medium fluorescence. Photo by Vincent Pardieu/GIA.

The mixed deposit at Maninge Nice is dominated by primary ruby mineralization in the amphibole-rich host rock. These primary rubies are flat, angular, light-colored, and strongly fluorescent. Overlying the primary rock is a gravel bed that is also very rich in rubies. These secondary rubies are similar to the ones in the host rock. This deposit produces large volumes of medium- to lower-quality commercial material, which reacts well to treatments such as flux healing. Although MRM has extensively mined this pit, there was no activity during our visit.

The secondary deposit known as Glass (figure 4) was being prepared for production during our visit. This source is located downstream from Maninge Nice. It consists of a gravel bed with a thickness simi­lar to that found at Mugloto, though the depth is more variable and can change sharply over a distance of a few meters. Some parts of the Glass area have been thoroughly worked by unlicensed miners, while others are untouched. Most of the production we saw at the sorting house was similar to rubies from Maninge Nice, although they had a rounded shape. Nevertheless, we also saw some material that resembled the Mugloto stones.

MRM stockpiles ore gravels from the different pits close to their washing plant (figure 5). Their current stock contains more than 800,000 tonnes of ore. This allows them to continue ruby production even when the mining of fresh gravels is halted. At the time of our visit, the facility could process 18,000 tonnes per week in ideal conditions. Their washing plant uses a series of screens to remove material measuring less than 3 mm and more than 25 mm before the gravels are concentrated in jigs. The concentrates are brought to the sorting house, where they are washed and handpicked. The selection is then sorted by quality and size before it is sealed for transport.

MRM is investing heavily in their washing and sorting installations. A new washing plant capable of processing twice as much ore has been operational since December 2016. This plant concentrates the gravels using dense media separation rather than jigs. At the end of 2017, a new sorting house is scheduled for the site. The sorting process will be more automated, allowing MRM to produce higher volumes of ruby. 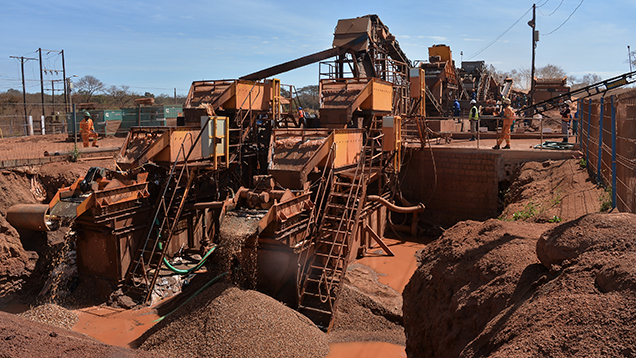 Figure 5. Jigs at the MRM washing plant. The washing capacity of this installation is reportedly 130 tons per hour. Photo by Vincent Pardieu/GIA.

New Players in Montepuez. An interesting development in 2016 was the arrival of two new mining companies that acquired mining licenses around Napula, north of the road linking Pemba and Montepuez. During exploration, both companies found attractive facet-grade ruby material. This was a surprise to author VP, who visited areas north of the road, near Namahaca, in 2009 and observed that the production from these pits was not very promising. Soon these pits were abandoned, and the author received no confirmation about the recovery of attractive rubies in areas north of the road. The new production near Napula suggests that the Montepuez ruby-producing area is larger than expected.

Mustang Resources. This Australian company acquired interests in three mining licenses northwest of the MRM license in 2015. Mustang’s operation started in 2016; during our visit Mustang was focusing on infrastructure and exploration of potential secondary ruby mineralization. They base their efforts on the earlier mining activity by garimpeiros. Mustang is working with a contractor specializing in geophysical exploration to map the subsurface and detect the gravel layers based on their reaction to electromagnetic signals. Most of the gravels are deeper than nine meters, making them more challenging to extract than the shallower areas around Montepuez. The advantage, however, is that they are mostly untouched by illegal miners.

During the exploration phase, Mustang excavates 1–2 ton samples of the gravels and washes them to determine the potential ruby grade. Mustang is washing the test samples with a small jig while building a larger processing plant. They plan to use rotary pans to concentrate the gravels once they start mining. The company has extensive experience with this technique, which is mainly used in diamond recovery. We examined some of the earliest production (figure 6) and found that the rubies were facet-grade material. The operation appears to have expanded after the authors’ visit. By mid-November, Mustang reportedly collected 810.46 carats of small rubies. 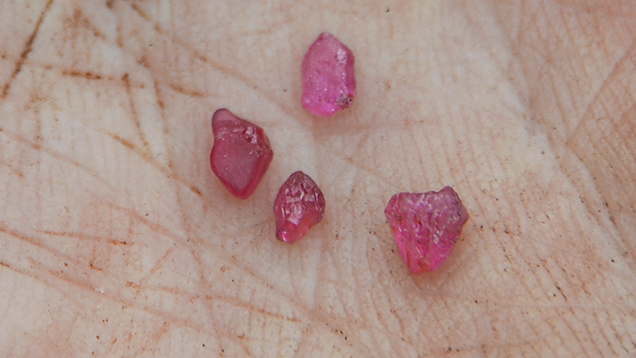 Figure 6. Facet-grade pink rubies discovered in the Mustang concession near Napula at the beginning of their exploration program. The largest stone weighs about 1 ct. Photo by Vincent Pardieu/GIA.

Metals of Africa. Metals of Africa is a significant player in graphite mining in northern Mozambique. The company recently recognized the opportunities in the Montepuez ruby area and acquired a mining license near the village of Napula. Metals of Africa entered into a joint venture with Mozambican Ruby Lda. to exploit this area, which borders Mustang’s license in the northwestern part of Montepuez. Metals of Africa is taking a novel approach to the operation: While tolerating garimpeiros within the concession, the company tries to reduce their numbers by providing alternative income through clearing roads and building infrastructure. Nevertheless, we witnessed around 300 garimpeiros still working within the concession, both on primary and secondary deposits (figure 7). 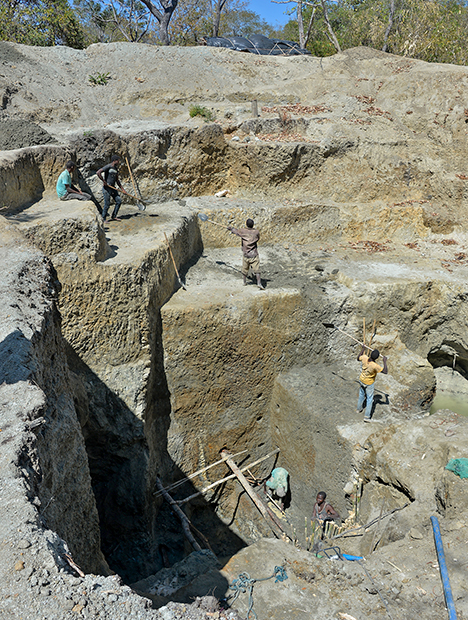 Figure 7. An artisanal mining pit in the Metals of Africa concession, where primary ruby is exploited by garimpeiros. Photo by Vincent Pardieu/GIA.

One valley showed good ruby potential. The upstream part had been extensively worked by garimpeiros, but they were not allowed to mine the downstream area, which belongs to a farmer. This downstream area was untouched and likely rich in ruby. In the dry streambed we were able to find some ruby that had been discarded by garimpeiros. These small pieces looked very similar to ruby from Maninge Nice in the MRM concession. In other areas, garimpeiros were producing rubies from altered amphibole-rich rocks in artisanal pits more than 18 meters deep (figure 8). The rocks in these pits were also very similar to those seen in the Maninge Nice pit in the MRM concession. Metals of Africa has sampled these places of interest and discovered some high-quality ruby. 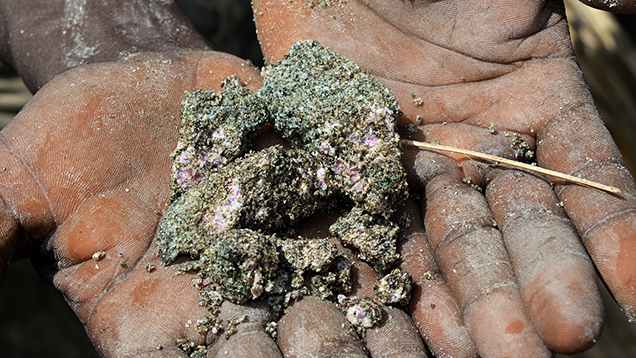 Figure 8. A garimpeiro shows some low-quality rubies in their matrix associated with amphibole, mica, and feldspar from a mining pit inside the Metals of Africa concession. Photo by Vincent Pardieu/GIA.

Since our last visit in 2015, Mozambique has enacted laws that distinguish illegal mining as a crime punishable by law. Therefore, unlicensed mining is now considered a serious criminal offense, whereas before it was only an infraction. This means that garimpeiros risk serious jail time if caught.

At the end of 2015, pink spinel was discovered in northern Mozambique (Boehm, 2016). The deposit is located a few kilometers east of Ocua (figure 9), a village near the southern border of the Cabo Delgado province on the road linking Pemba and Nampula. All the mining was done by artisanal miners. The stones were typically small, with an attractive light pink color (figure 10). Most of the material was facet grade, though it tended to be slightly milky. The land they were mining was being exploited for timber by a Chinese company that quickly acquired a gem-mining license for the area. During our visit, the company was bringing in mining machinery. The garimpeiros had been asked to leave, and most went to work on the other side of the road, where tourmaline was recently discovered. In this new area, we could see around 200 miners digging for gemstones. They were collecting gem-rich gravels in pits up to three meters deep. These gravels contained a variety of minerals, but the most attractive were yellow to green tourmaline crystals (figure 11).

Figure 9. The Ocua tourmaline mining area was being worked by garimpeiros. Photo by Vincent Pardieu/GIA. 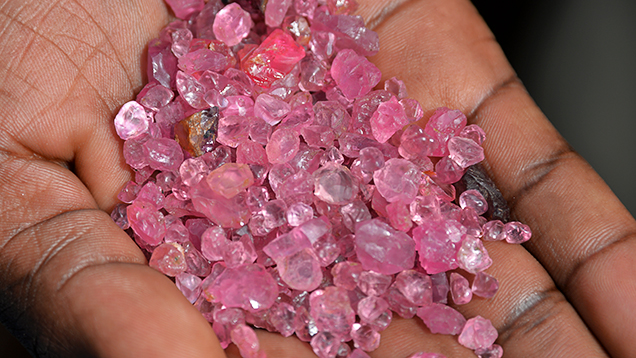 Figure 10. Pink spinel from Ocua, presumably mined in the area claimed by a Chinese timber company. Photo by Vincent Pardieu/GIA. 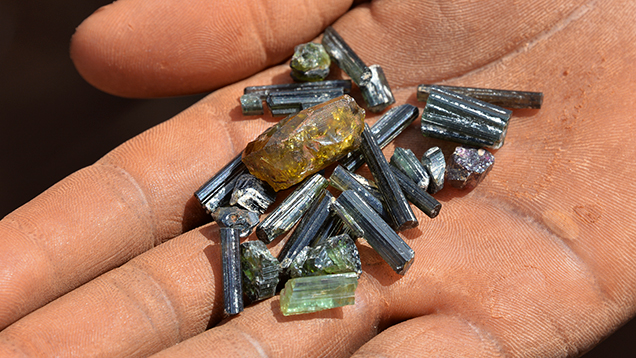 Figure 11. A parcel of mainly green and yellow tourmaline from Ocua. Photo by Vincent Pardieu/GIA.

Northern Mozambique has more ruby mining activity than ever, with several new players showing interest. We saw that the Montepuez ruby deposit may be larger than expected, with mining activity extending outside MRM’s concession. This is an indication that this deposit’s potential has yet to be fully explored. The discovery of other types of high-quality material, such as pink spinel and tourmaline, also underscores the gem wealth of this region. As field gemologists, we are confident that further discoveries and developments in northern Mozambique will continue in the future.

We would like to thank the people we met in Mozambique and particularly the people from Gemfields, Mustang Resources, and Metals of Africa for their hospitality and support during our field expedition.

GIA staff often visit mines, manufacturers, retailers, and others in the gem and jewelry industry for research purposes and to gain insight into the marketplace. GIA appreciates the access and information provided during these visits. These visits and any resulting articles or publications should not be taken or used as an endorsement.