Durability of a Broken Glass-Filled Ruby

Figure 1. Left: The two pieces of a glass-filled ruby were combined to demonstrate its appearance before breaking. Center and right: The two pieces that broke during the setting process. Photos by Lai Tai-An Gem Lab.

It is no secret that corundum is subjected to heating and fracture-filling treatments to alter its color and improve its clarity in order to increase the market value. Heat treatment in particular has become common practice and is generally accepted in the market, provided it is fully disclosed. The trade and end consumer are more concerned about the term “residue,” what it means, and how it affects the stone. Many heat-treated stones are easy to detect with magnification, and a recent case submitted to the Lai Tai-An Gem Laboratory involving a broken ruby revealed how heat treatment applied to rubies can influence durability.

The client claimed that the ruby in question (figure 1) was broken into two pieces by a goldsmith who only applied standard pressure on the claws when setting the stone in a piece of jewelry. The ease with which the stone broke under these normal conditions caused the jeweler to submit the piece for examination.

The original ruby measured 8.2 × 5.7 × 4.1 mm and weighed 2.08 ct, while the two pieces weighed 1.10 ct and 0.98 ct after the damage. Identical refractive index readings of 1.762–1.770 were obtained and a specific gravity of 4.00 was determined on each piece. Further observation under long-wave UV light revealed a weak red reaction, and Fourier transform infrared and Raman spectra were indicative of ruby. The stone’s natural origin was proved when extensive twinning, white acicular inclusions, and parting planes were observed through a gemological microscope. Some white flaky glass residues (figure 2) were also seen on broken surfaces, and numerous tiny gas bubbles were observed within some fractures. Flattened filler was also visible within the partially healed fractures (figure 3). When analyzed with a Micro-XRF M4 Tornado Bruker spectrometer, the filling material showed significant silica content. 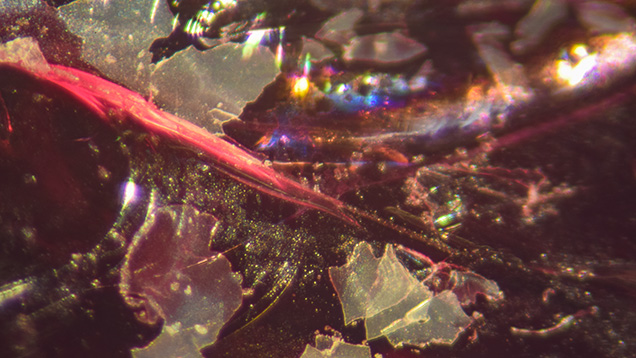 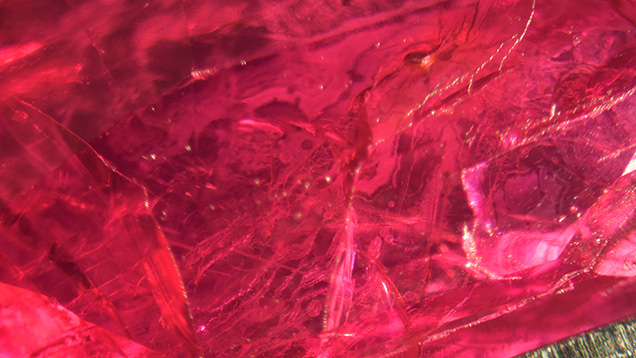 DiamondView observations revealed that the residue within some fractures was more opaque (figure 4), confirming the existence of glass filler. While the application of heat treatment together with glass filler usually improves a ruby’s clarity, some fractures may not heal completely. Since the starting material is often of low quality, the industry and consumers should be alert to the potential risk of damaging stones during the mounting process. Careful inspection of any stone prior to setting is recommended.

Figure 4. These images show the appearance of the white silica glass filler residue on some fracture surfaces under normal lighting conditions (visible light, left) and as opaque dark areas against the bright red ruby reaction in the DiamondView (right). Photos by Lai Tai-An Gem Lab.
About the Author