Synthetic quartz is grown by the hydrothermal technique, which can produce large single crystals of high quality (K. Byrappa and M. Yoshimura, Handbook of Hydrothermal Technology: A Technology for Crystal Growth and Material Processing, William Andrew Publishing, 2001). This process, widely used in the jewelry trade, has led to difficulty in separating synthetic quartz from its natural counterpart (R. Crowningshield et al., “A simple procedure to separate natural from synthetic amethyst on the basis of twinning,” Fall 1986 G&G, pp. 130–139). The presence of Brazil-law twinning and certain inclusions, such as tourmaline or golden rutile needles, can be used to distinguish natural from synthetic quartz. But high-quality quartz, whether of natural or synthetic origin, typically has no inclusions or twinning. In this case, standard gemological testing may not be able to identify the origin. Advanced instruments, including infrared absorption spectroscopy (S. Karampelas et al., “An update in the separation of natural from synthetic amethyst,” Bulletin of the Geological Society of Greece, 2007, pp. 805–814) and LA-ICP-MS are considered useful tools for separating natural from synthetic material from material with synthetic origins (C.M. Breeding, “Using LA-ICP-MS analysis for the separation of natural and synthetic amethyst and citrine,” GIA News from Research, 2009).

Figure 2. Irregular two-phase inclusions seen in the bangle using darkfield illumination (left and right) are similar to those found in natural specimens but are rarely found in hydrothermal synthetic quartz. Photo by Nattida Ng-Pooresatien; field of view 4.1 mm. 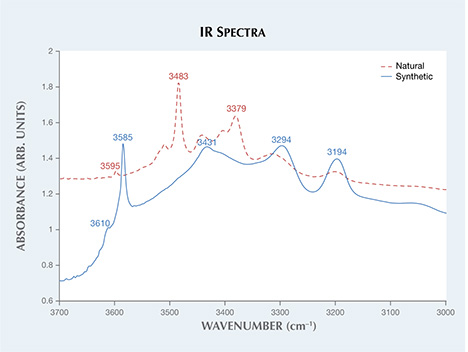 Nattida Ng-Pooresatien is a staff gemologist at GIA in Bangkok.

Where there are no inclusions or color zoning, the presence of Brazil twinning in the natural amethyst will usually make the distinction.