Primary diamond deposits are usually found in mantle-derived igneous rocks, with the principal hosts being kimberlite and lamproite. During the ascent to the earth’s surface, diamonds may be converted, partially or entirely, to graphite and chemically dispersed and eliminated (A.A. Snelling, “Diamonds – Evidence of explosive geological processes,” Creation, Vol. 16, No. 1, 1993, pp. 42–45). GIA’s New York laboratory recently received a 1.30 ct Fancy brownish greenish yellow diamond (figure 1) containing an octahedral-shaped inclusion outlined by minute crystal inclusions along the junctions of the crystal faces.

Gemological examination at 60× magnification reveals that the octahedral-shaped inclusion is outlined by numerous irregular dark crystals (figure 2). Advanced gemological analysis with UV-Vis and FTIR spectroscopy confirmed that this was a natural diamond with a natural color origin. 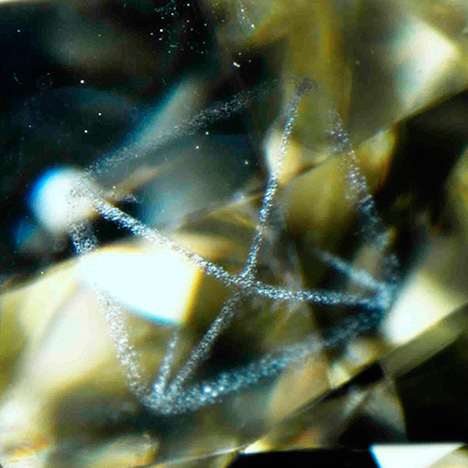 Further analysis using Raman spectroscopy reveals that the dark inclusions are graphite crystals with a Raman peak at 1590 cm–1 (figure 3), which corresponds to the graphite G band (I. Childres et al., “Raman spectroscopy of graphene and related materials,” in J.I. Jang, Ed., New Developments in Photon and Materials Research, Nova Science Publications, 2013). Since this G band is at a slightly higher energy level than that from the primary graphite, which usually peaks at around 1580 cm–1, we propose that the crystals tested are likely the secondary graphite converted from part of the original diamond into graphite form during the specific growth episode when oxidized fluids rich in CO2 and H2O passed through diamond bearing horizons. This also explains the shift of the G band to a higher energy, due to the higher strain near these newly formed secondary graphite crystals (J. Hodkiewitcz, “Characterizing graphene with Raman spectroscopy,” Application Note: 51946, Thermo Fisher Scientific, Madison, Wisconsin, 2010). Late formation of additional diamond layers on top of the graphites would have converted them to covered internal features within the larger diamond (R.H. Mitchell, Kimberlites and Lamproites: Primary Sources of Diamond, Geoscience Canada Reprint Series 6, Vol. 18, No. 1, 1991, pp. 1–16). Primary graphite crystals could also mix into the crystal clouds during the diamond’s growth due to changes in environmental temperature, pressure, and the growth fluid’s chemical elements. These minute graphite crystals would tend to form along the junctions of crystal faces, since they usually have a higher surface energy. Thus, we believe that both primary and secondary graphite formation, occurring between the diamond’s growth episodes, contributed to this phenomenal octahedral outline. 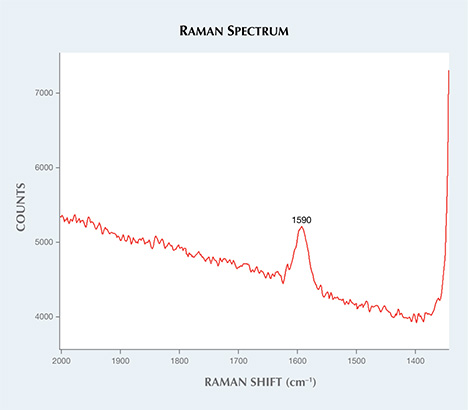 Figure 3. The graphite G band at 1590 cm–1 is found on the minute crystals along the crystal junctions, confirming that they are graphite crystals.

Graphite inclusions are commonly seen in diamonds as isolated crystals or jointed crystal clouds. It is very unusual to see these minute graphite inclusions formed at the junctions of the original diamond crystal faces and outlining the octahedral growth pattern. This stone not only captures the amount of stress and extreme conditions under which the diamond grew, but also shows the beauty of the formation of crystalline diamond.

Yixin (Jessie) Zhou is a staff gemologist at GIA in New York.