Rubies from a New Deposit in Zahamena National Park, Madagascar

In July 2015, news circulated through the trade about a ruby discovery south of Andilamena, near Lake Alotra (figure 1). Photos of clean, attractive stones of over 10 carats were shared on social media by Malagasy and Sri Lankan gem merchants. Several thousand unlicensed miners quickly descended on the area, creating serious conservation concerns as the new deposit was located inside Zahamena National Park. In August 2015, the Malagasy government sent soldiers to close the mining site. But because the area is very remote, they could not maintain their presence longer than a month. As soon as the soldiers departed, the miners returned in numbers.

Gem-quality rubies and sapphires are not unknown in northeastern Madagascar: They were first found in 2000, east of Andilamena and west of Vatomandry (Summer 2001 GNI, pp. 147–149). These discoveries were followed by a blue sapphire deposit near Andrebabe, a few kilometers south of Andilamena, in 2002 (www.ruby-sapphire.com/madagascar_ruby_
sapphire.htm). Ruby mining was limited until 2004, when demand for the heavily fractured material from Andilamena dramatically increased with the advent of the lead-glass filling treatment developed in Thailand between 2001 and 2004. Visiting the deposit in June and September 2005, author VP could see that more than 10,000 miners were living and working in the jungle (www.rwwise.com/madagascar1.html). In 2011 and 2012, two new discoveries occurred in the region. The first was a pink and blue sapphire deposit near Mandraka village, north of Toamasina. In 2012, a deposit was discovered east of Didy (www.giathai.net/pdf/Didy_Madagascar_US.pdf). That deposit produced some large, clean, and attractive rubies and blue sapphires. More discoveries followed—near Bemainty, north of Didy, for instance—but either the gems were ordinary or the rush was short-lived. In 2015, a new blue sapphire rush occurred near Andrebabe in February, followed by a ruby discovery near Ambodivoangy village in July (http://lotusgemology.com/index.php/library/articles/322-blood-red-rubies-from-madagascar-lotus-gemology).

From September 23 to October 6, 2015, a GIA field expedition team collected samples at the mines. After three days of walking in the jungle, the team was able to visit the new mining sites (figure 2), located about four hours’ walking distance from Ambodivoangy. There they witnessed some illegal ruby mining activity by artisanal miners at two different sites, located in a valley at 17°37'60''S 48°52'19''E and along a creek in a forested area at 17°38'26''S 48°52'38''E. They confirmed that the deposit was indeed located inside Zahamena National Park. Approximately 500 people were seen at the lower mining site, while about the same number worked in the forest along a stream where ruby-rich gravels were collected (figure 3). 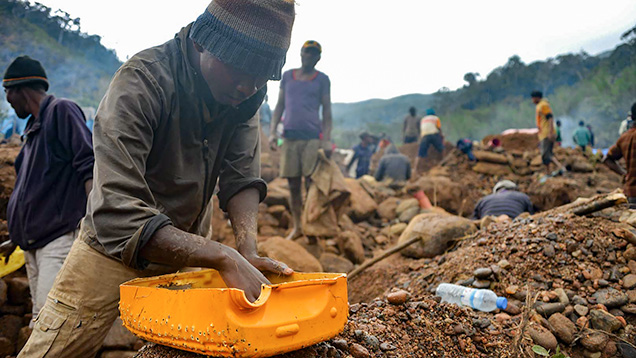 Figure 2. A young Malagasy miner searches for rubies in Zahamena with simple homemade tools: a pierced plastic oil can used as a sieve and an empty water bottle to store his gems. Photo by Vincent Pardieu/GIA. 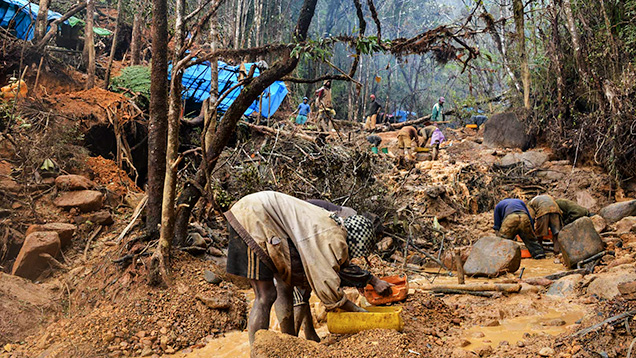 Figure 3. Artisanal Malagasy ruby miners wash gem-rich gravels in the stream that runs through the jungle of the Zahamena National Park. Photo by Vincent Pardieu/GIA.

The local trading center was in Andrebakely, with mainly Malagasy buyers, while foreign buyers (typically from Sri Lanka) waited for local miners and businessmen at Tanambe and Andilamena. In both towns, more than 20 Sri Lankan buying offices were visible, mostly in houses with painted signs for the different companies.

The new deposit is located about halfway between the old ruby deposit in the jungle east of Andilamena (discovered in 2000) and the rush that occurred at Didy in 2012 (www.giathai.net/pdf/Didy_Madagascar_US.pdf). The rubies from Zahamena share obvious similarities with those from Andilamena, such as their inclusions (mainly zircon and rutile crystals associated with rutile needles) and trace-element composition. Therefore, it is likely that these deposits are related, and a huge ruby and sapphire deposit could be hidden under the jungle in northeastern Madagascar.

Back at GIA’s Bangkok lab in October 2015, the samples were fabricated and data was collected from them; a more extensive study is in progress. At this point it is interesting to note that the rubies from the Zahamena deposit have a very similar aspect to those from amphibole-related African deposits such as Montepuez in Mozambique, Chimwadzulu in Malawi, and Winza in Tanzania. Their iron content is indeed much higher than that of the marble-type rubies mined in Myanmar, Vietnam, Afghanistan, or Tajikistan. The shape of the crystals is generally tabular but not as flat as what is commonly found in Mozambique, meaning that faceted stones with good proportions can be produced. The new material is on average more included than the ruby from Montepuez. But ultimately the limiting factor for this deposit is its location inside Zahamena National Park, where gem mining is illegal.