The Tokyo laboratory recently received a 3.02 ct red pear-shaped mixed cut measuring 10.93 × 7.04 × 5.03 mm (figure 1). Standard gemological testing yielded a refractive index of 1.765–1.773; a hydrostatic specific gravity of 4.00; absorption lines at 693, 476, and 468 nm; and a broad absorption band between 500 nm and 610 nm seen using a handheld spectroscope. All of these properties were consistent with ruby. The stone displayed strong red fluorescence under both long-wave and short-wave UV. 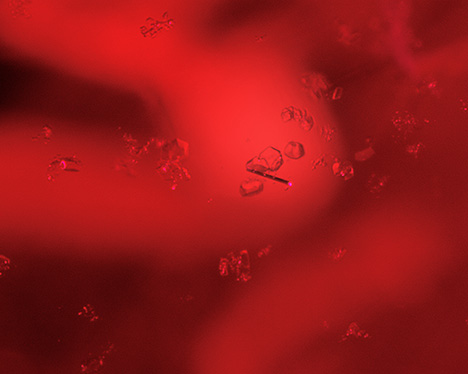 Figure 2. These natural-looking hexagonal colorless crystals and the small nest of inclusions in the flux-grown ruby (top of image and around the hexagonal crystals) could be mistaken for natural corundum inclusions. Photomicrograph by Yuxiao Li; field of view 1.41 mm.

Figure 4. Fingerprints in the flux-grown ruby could also be mistaken for natural residue-filled fingerprints. Photomicrograph by Yuxiao Li; field of view 1.23 mm.

Figure 5. The Raman spectrum of the chrysoberyl inclusion compared to that of the known reference.

There was no surface-reaching transparent crystal in that pink synthetic sapphire, but the small amounts of beryllium suggested the possibility of chrysoberyl. In the present laboratory-grown ruby, fortunately, one of the transparent crystals reached the surface. With Raman spectroscopy, we were able to identify it as chrysoberyl (figure 5).

The beryllium concentration of this laboratory-grown ruby (up to 37 ppma) indicated possible beryllium diffusion treatment. High chromium (up to 2047 ppma) resulted in a vivid red color. With such a highly saturated bodycolor, we cannot deny the possibility of beryllium diffusion, though the signature orange rim was not found using immersion techniques. The numerous chrysoberyl crystals offer important evidence that the beryllium was already excised during the flux growth process. Beryllium diffusion of corundum requires exposure to extreme heat (above 1780°C; J.L. Emmett et al., “Beryllium diffusion of ruby and sapphire,” Summer 2003 G&G, pp. 84–135). These chrysoberyl inclusions do not show the typical indications following heat treatment, meaning this stone was not beryllium diffused after its growth.

With LA-ICP-MS and Raman spectroscopy, we were able to confirm that flux-grown laboratory-grown ruby with high beryllium content could indicate the presence of natural-looking chrysoberyl crystals.

Yuxiao Li is a gemologist trainee at GIA in Tokyo.

Beryllium Diffusion of Ruby and Sapphire

Over the past two years, the heat treatment of corundum involving lattice diffusion of beryllium (Be) at temperatures over 1800°C has become a major issue in the gem trade.