Topaz is an important gemstone that occurs in various colors. The authors had the opportunity to examine some unusual black topaz crystals and crystal fragments whose appearance was the result of numerous small dark mineral inclusions (figures 1 and 2). The topaz originated from an undisclosed locality in the Thomas Mountains in Juab County, Utah. They were provided by Shaun Rasmussen and Krisann Morrill (SK Star Claims, Provo, Utah), who discovered the occurrence. Careful microscopic examination revealed the presence of several inclusion minerals (figure 3, top). Among these were thin, translucent brownish plates of annite/phlogopite mica; transparent colorless, spherical crystals of fluorite; and opaque black octahedral crystals of magnetite. These minerals, which are well-known inclusions in topaz, were confirmed by Raman microspectrometry. 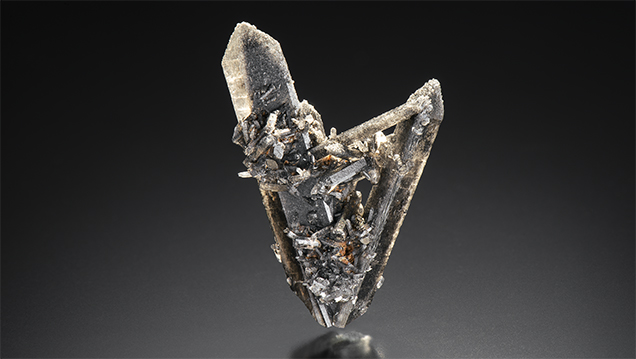 The presence of both magnetite and wolframoixiolite inclusions in the topaz resulted in a slight magnetic behavior. The corroded and sometimes altered appearance of both dark inclusion phases suggests that they represent protogenetic inclusions that formed during an earlier stage of mineral crystallization in the growth environment and were subsequently incorporated within the topaz. In spite of their abundance, these different inclusion minerals did not create any optical phenomena.

We thank those who provided these samples, which represent the first black-appearing topaz we have examined.

Jonathan Muyal is a staff gemologist, Ziyin Sun is a research associate, and James Shigley is distinguished research fellow, at GIA in Carlsbad, California.