Every year about 100 new minerals are described, but few have been discovered as inclusions in gemstones (e.g., carmichaelite in chrome pyrope from Arizona and protoenstatite in labradorite from Oregon). In 2015, a new mineral—perettiite-(Y)—was described as inclusions in phenakite crystals from pegmatites by Khetchel village in the Molo area near Momeik, about 100 km northeast of Mogok (R.M. Danisi et al., “Perettiite-(Y), Y3+2Mn2+4Fe2+[Si2B8O24], a new mineral from Momeik, Myanmar,” European Journal of Mineralogy, Vol. 27, No. 6, pp. 793–803). It was named after Swiss gemologist Adolf Peretti, head of the GemResearch Swisslab, who found the first specimens.

Perettiite-(Y) has a very unusual composition, Y2Mn4Fe[Si2B8O24]. It forms strongly tapered yellow needles up to several millimeters long; only very rarely do they form beautiful bundles (figure 1, left). Several other inclusions were also found in phenakite from the same locality, including the very rare tin borate tusionite, which forms groups of mica-like yellow plates (figure 1, right). Phenakite itself is also unusual, because it often forms twins with very strange “drill bit” termination (figure 2). Unfortunately, perettiite-(Y) and tusionite inclusions (figure 3) are extremely rare, found in just a few pieces in a thousand phenakite crystals, so cut stones will remain a valuable collector’s rarity (figure 3). 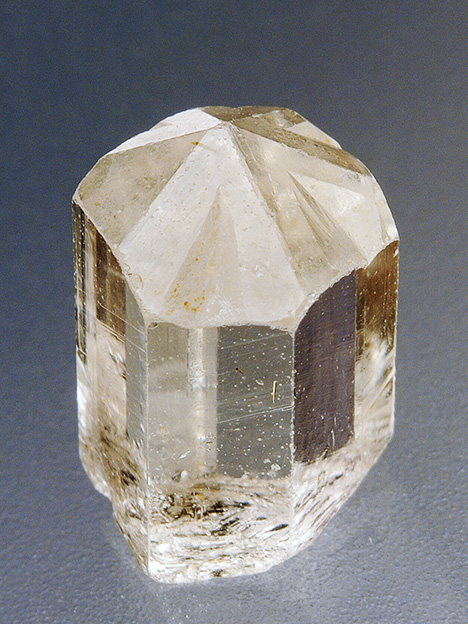 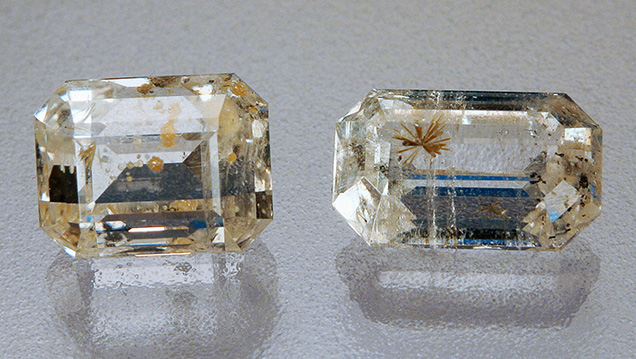 Figure 3. Phenakite with tusionite (left) and perettiite-(Y) inclusions (right). The specimen on the left weighs 1.77 ct, and the one on the right weighs 2.31 ct. Photo by J. Hyršl. From the author’s collection.
About the Author

Jaroslav Hyršl is a mineralogist and author based in Prague.