Assemblages of various materials have long been used as imitations of precious stones, with records dating back to Pliny the Elder’s Natural History (79 AD). Assembled stones commonly consist of two or more pieces of materials joined together in a parallel, layered fashion. Natural gem materials, such as spinel or garnet, are often used for the crown for the dual benefit of their durability and natural inclusions. The pavilion is typically composed of attractively colored, inexpensive materials such as glass or synthetic sapphire.

Figure 2. Left: All four glass sections of the pavilion assemblage are visible in reflected light. The small triangular segment is a protrusion from the opposite side. Photomicrograph by Tyler Smith; field of view 3.57 mm. Right: Metallic dendritic films supporting the natural provenance of the beryl core. Also visible are planar bubbles within the cement layer. Photomicrograph by Augusto Castillo; field of view 2.90 mm. 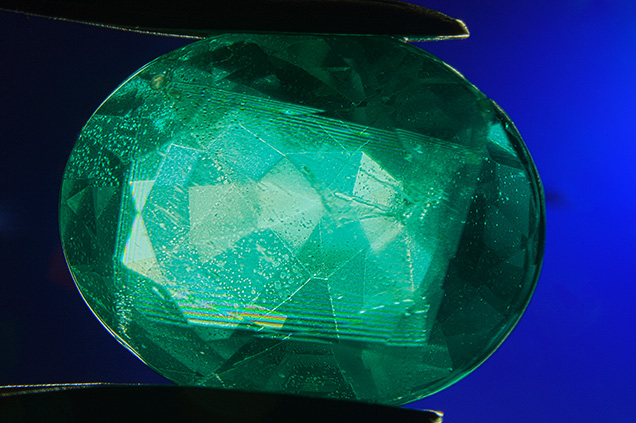 A unique assembled 3.35 ct imitation emerald composed of five glass segments surrounding a rectangular beryl core (figure 1) was submitted to the New York lab. Microscopic observation revealed multiple nonparallel cement planes in the pavilion (figure 2, left). The crown was shown to be separated from the pavilion in a single piece, whereas the pavilion was composed of four asymmetrical exterior segments surrounding a sub-rectilinear pyramidal core. The core material contained inclusions typical of natural beryl, such as dark dendritic flakes (figure 2, right) and fingerprints. Large gas bubbles and internal chips were observed within the cement layers that accumulated at the beryl core’s corners. Standard gemological testing produced consistent refractive indices of 1.61 on both the crown and the four segments that made up the pavilion, a specific gravity of 2.99, and weak white fluorescence in the cement planes in long- and short-wave UV light. Under cross-polarized light, the outer material was singly refractive and displayed interference patterns along the interior join planes (figure 3). When immersed, the coloration was shown to be derived from the surrounding sections and joined by a colorless cement. This was further supported by ultraviolet/visible/near-infrared (UV-Vis-NIR) spectroscopy, which yielded a spectrum similar to manufactured green glass samples from our database. Raman microscopy of the crown and four pavilion segments produced amorphous spectra typical of glass. In addition to amorphous mounds, beryl peaks were detected in the core material, confirming prior suspicions.

Figure 4. Diagram showing the proposed model of the complex assembly of the composite stone. Final faceting is shown for simplicity. A: The first glass segment (green) is attached to the beryl core (gray). B: Both the core and the first segment are cut to make a flat surface for the second segment. C: The second segment (teal) is attached. D: The segments are again cut. E: The third segment (blue) is attached. F: The assemblage is shown rotated 180° for clarity. All current pieces are cut to create the surface for the final piece. G: The fourth and final segment (purple) is attached. H: Omitted for simplicity, the assembled pavilion would likely be polished flat to make room for the crown. Lastly, the crown (pink) is attached. The diagram was generated using Onshape CAD software.

Interestingly, the four glass segments in the pavilion assemblage are interlocked in a fashion that reveals a possible explanation of how the stone was manufactured. Based on visual observations, it appears the pavilion was constructed by a laborious multistep cut-and-glue process (figure 4). As a result of the iterant cutting, the first segment shares five sides that are parallel to the faces of the beryl core (four pyramidal faces and one basal). The number of faces parallel to the core decreases by one for each added glass segment. The asymmetry of the segments, parallel faces, and precise angles that match the sides of the core support the proposed model of ordered assembly.

The authors were not able to find any records of this type of assembled stone, and it was the first time one has been submitted to GIA’s New York or Carlsbad laboratories. Since all exposed surfaces were glass, it is assumed that the stone was fabricated relatively recently due to the sharp facet junctions and lack of wear. It is intriguing that an antiquated technique is updated in modern times, serving as a cautionary tale of the ingenuity counterfeiters employ.

Tyler Smith and Augusto Castillo are staff gemologists at GIA in New York.