The client who submitted the bangle believed it was resin-impregnated jadeite owing to its suspiciously strong fluorescence reaction. The item possessed an uneven green and white color with a greasy luster and weighed 277.14 ct. It measured approximately 76 mm with a thickness of 9–10 mm. A refractive index (RI) reading of 1.66 was obtained from five random spots on the bangle, and a specific gravity (SG) of 3.34 was also recorded. The most interesting feature was an unusually strong reaction under long-wave UV (figure 1, right), indicating it was probably treated and should be examined with more care. This material was determined to be jadeite jade when subsequently tested by Fourier-transform infrared (FTIR) spectroscopy, but the FTIR results also revealed some features other than the jadeite-related peaks. 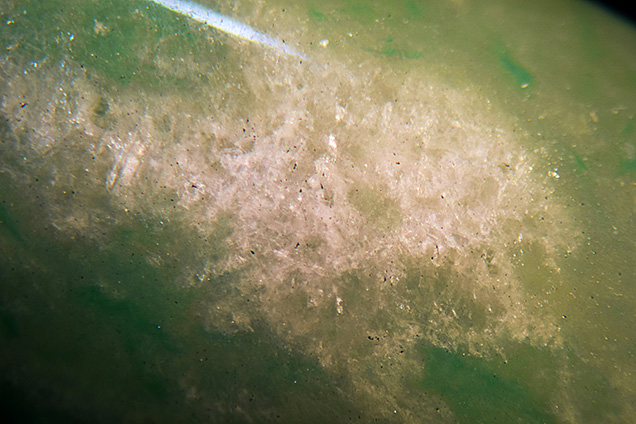 FTIR analysis confirmed that the jadeite bangle was heavily impregnated with wax. The absorption peaks at 2850, 2920, and 2965 cm–1 differed from those expected in resin-impregnated material—which usually exhibits peaks at 3061 and 3040 cm–1—and they were intense and sharp enough to indicate that a significant quantity of wax had been applied. Microscopic examination revealed obvious acid etching marks, coarse pits, and cobweb-like surface fissures (figure 2). Wax residues were also found within pits and fissures when poked. Additional unseen wax was apparently within the structure according to the wax pattern revealed by FTIR analysis, typical for wax-impregnated B-type jadeite, which clearly explains the strong reaction under long-wave UV.

While the term B-jade is meant to be applied to wax- and/or resin-impregnated material (Laboratory Manual Harmonisation Committee Information Sheet #11, http://www.lmhc-gemology.org/pdfs/IS11_20111215.pdf), many traders misleadingly describe B-type jadeite jade as resin-impregnated only. This leads the unsuspecting buyer to believe that wax-impregnated jadeite jade is A-jade. This case clearly shows that those dealing in jadeite should be aware of the differences between resin- and wax-impregnated materials, even though both are considered B-jade, and understand that confusion may arise if items are not carefully checked.