A Synthetic Diamond Overgrowth on a Natural Diamond

Nitrogen is the most abundant defect in natural diamonds. It can be observed as single substitutional atoms or in aggregate forms. Boron, on the other hand, is a rare impurity in natural diamonds. It is very unusual to see both nitrogen and boron defects in a single diamond. GIA’s New York laboratory recently encountered this in a 0.33 ct diamond graded Fancy blue (figure 1).

The infrared spectrum revealed something very unusual: a mixed type Ia and IIb diamond (figure 2). It also showed a platelet peak at 1367 cm–1 and a hydrogen peak at 3107 cm–1. Mixed type Ia and IIb diamond occurs very rarely in nature; one was previously reported in Gems & Gemology (Spring 2009 Lab Notes, pp. 55–57). Nitrogen aggregation in this diamond was much higher, however. DiamondView images showed bluish green fluorescence in the face-up view and blue fluorescence in the face-down view (again, see figure 2). Detailed analysis using the DiamondView revealed a yellowish green fluorescence zone at the top of the crown with a sharp boundary in the crown facets (figure 2). PL spectra collected from the table and at the boundary in the crown facets showed emissions from SiV– defects at 736.3 and 736.9 nm. 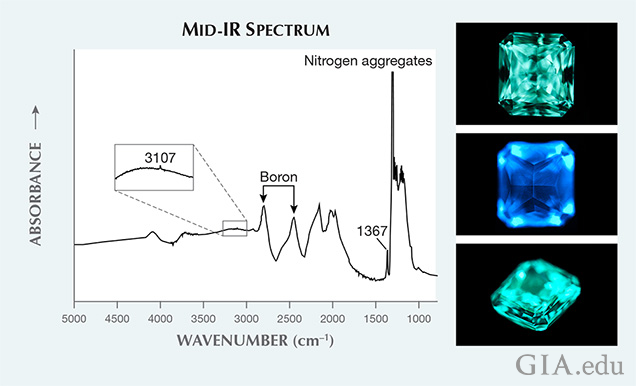 Figure 2. The mid-IR spectrum on the left revealed peaks for nitrogen aggregates and boron defects, along with a platelet peak at 1367 cm–1 and hydrogen peak at 3107 cm–1. DiamondView imaging showed bluish green fluorescence in the face-up view (top right) and blue fluorescence in the face-down view (center right). The yellowish green fluorescent top layer was visible in a DiamondView image (bottom right). Images by Kyaw Soe Moe.

Although SiV– defects can be observed in a natural diamond, the combination of SiV– defects, a sharp boundary, yellowish green fluorescence, and phosphorescence suggested that the top layer was CVD synthetic diamond. The bottom diamond showed blue fluorescence but no phosphorescence in the DiamondView, consistent with natural type Ia diamond. A distinct boundary line was observed along the interface layer on the crown facets (figure 3). The presence of the overgrowth layer was also clearly revealed through inspection with a variable pressure electron microscope set up to detect both secondary electron and panchromatic cathodoluminescence (CL) emission from the sample, providing topographical and compositional information (again, see figure 3). A distinct interface was visible through the pavilion in reflected light using a fiber-optic light source. A cloud-like inclusion, trapped at the interface layer, was also observed, as well as a dark needle located at or near the interface (figure 3). A small stress halo and a natural surface could be observed in the bottom diamond. The strain pattern throughout the pavilion was consistent with natural type Ia diamond. The quality of a CVD synthetic depends on the crystallographic orientation and temperature of the seed crystal or substrate during growth. CVD synthetic diamond films have been grown on natural diamond substrates since the early 1960s (W.G. Eversole, U.S. patents 3030187 and 3030188, 1962). Methane and other carbon-containing gases were used, but graphite was deposited along with the CVD synthetic layers. In 1993, CVD synthetic layers were successfully grown on natural type IIa and Ia diamond substrates (see B.G. Yacobi et al., “Preferential incorporation of defects in monocrystalline diamond films,” Diamond and Related Materials, Vol. 2, No. 2–4, 1993, pp. 92–99). They applied a mixture of CH4 and H2 at 80 torr in a microwave plasma-assisted CVD system. Reaction between CH4 and H2 produced H atoms, which maintained an sp3-bonded surface and prevented graphitization. The temperature applied to the natural diamond substrate during the CVD growth process of the sample we studied was relatively low, as suggested by the absence of single substitutional nitrogen atoms (Ns0). It is also in agreement with Yacobi (1993), who applied temperatures of 880°C for CVD growth on type Ia {100} diamond substrates and 1200°C for type Ia {111} diamond substrates. Deposition of a boron-doped CVD synthetic film of <10 microns on a natural gem-quality diamond was reported in 2005 (Summer 2014 Lab Notes, p. 152); however, spectroscopic analysis did not show boron and SiV– defects.

Figure 3. Left: A distinct boundary line indicating an interface (marked with arrows) was seen under the microscope. A dark needle inclusion is located at or near the interface (near the center of the image). Photo by Kyaw Soe Moe; field of view 1.95 mm. Center: An electron microscope image combining secondary electron and cathodoluminescence emissions reveals the presence of an overgrowth layer. Photo by Ulrika D’Haenens-Johansson. Right: The CVD synthetic layer is approximately 80 microns thick.

Based on the growth pattern of the natural diamond, it is clear that the type IIb CVD diamond was produced in or very close to {100} orientation. The natural diamond substrate showed no observable inclusions except for a very small stress halo. The thickness of the CVD overgrowth layer was approximately 80 microns (again, see figure 3). FTIR spectroscopy is a bulk analysis, making it very hard to measure and separate IR spectra between a thin CVD layer on top and a thick diamond substrate. However, the fluorescence and phosphorescence reactions suggest that the top synthetic layer contained boron (e.g., boron-doped CVD synthetic) and the bottom diamond contained nitrogen aggregates. The thin layer of type IIb CVD synthetic diamond on the top of this stone effectively introduced Fancy blue color when viewed from its table.

This synthetic overgrowth on a natural diamond with a Fancy color grade is the first GIA has seen. Identification of colored diamonds should be performed very carefully by looking for unusual characteristics, such as a straight boundary line associated with an interface plane, and fluorescence zones with sharp edges in DiamondView images. Examination of this fancy-color composite diamond indicated that similar challenges could exist for colorless and near-colorless diamonds.