Recently, RAG Gemological Laboratory in Turin received a necklace of unusual metallic appearance (figure 1). The beads showed irregular surfaces that were actually small geodes with shiny and well-shaped crystals. The cavities in the beads (figure 2) were reminiscent of the small quartz-lined holes that are often formed in agates and chalcedony. The necklace consisted of 29 beads ranging from 12.0 to 12.5 mm in diameter, with a total weight of 84 g. 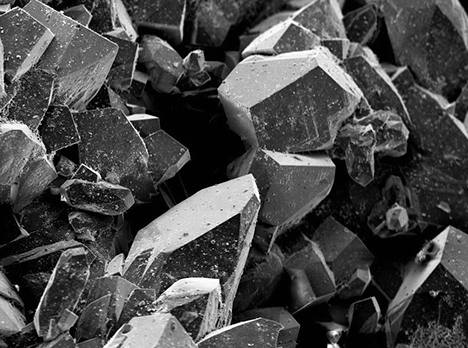 Some loose opaque beads provided by the necklace’s owner allowed us to measure the material’s density. The value of 2.60 g/cm3 was in agreement with chalcedony. Refractive index was not measurable on the beads due to their rough surface. No fluorescence reaction was observed under long- or short-wave UV. A sawed bead revealed that the inner part consisted of light gray chalcedony without zonation (figure 3). Observation of the area near the drill holes showed discoloration and the true color of the underlying material. The coating on these grayish gold chalcedony beads in this necklace had an unusual composition. The unusual color and reflectivity of the external surface, clearly not inherent to chalcedony, warranted investigation. 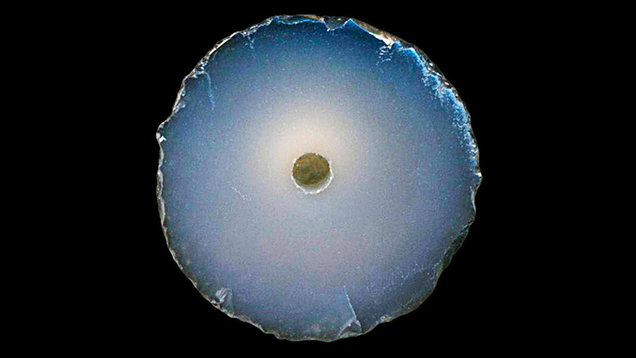 Figure 3. This sawed cross-section clearly demonstrates the homogeneity and light gray color of the chalcedony that constitutes most of the bead. Photo by Emanuele Costa.

The chemical composition of the bead was confirmed by energy-dispersive spectroscopy (EDS) using a Cambridge Stereoscan 360 scanning electron microscope equipped with an Oxford Inca Energy 200 EDS and a Pentafet detector for the determination of elements from boron to uranium. The results showed homogeneous composition on the sample surface, with titanium, oxygen, and silicon as major elements. No known compound of Ti and Si could explain the nature of the bead’s surface or the goldish gray metallic tinge.

Low-acceleration voltage conditions in EDS analysis (4kV) allowed us to enhance the X-ray emission yield of lighter elements and reduce the penetration depth of the electron beam at around 100 nm into the bead’s surface. The EDS spectra at low acceleration voltage showed the presence of nitrogen and titanium, suggesting a coating of titanium nitride (TiN) on the beads. At low potential the electron beam could pass through the thin layer of TiN, so the oxygen and silicon peaks from the underlying silica were still visible in the spectra. We calculated the thickness of the coating by acquiring several EDS spectra at different acceleration voltages (from 4 to 10 kV). The presence of the silicon peak even at 4 kV suggests that the electron beam could penetrate the layer and generate the signal through the TiN coat. The Casino software package evaluated the corresponding excitation depth of the electron beam using a Monte Carlo simulation. The calculated maximum thickness in our samples was less than 200 nm.

TiN is a very difficult material to analyze due to the presence of nitrogen, which is not always revealed with standard gemological techniques. To confirm the presence of a TiN film coating, we performed micro-Raman investigations. Spectra were obtained using a micro/macro Horiba LabRAM HR 800 (UV-Vis-IR) equipped with an Olympus microscope. The backscattered Raman signal was collected with a 50× objective and the 632.8 nm line of a He-Ne laser. The spectra were collected with multiple and repeated acquisitions to improve the signal-to-noise ratio, but even with these precautions the quality of the spectra is very poor due to the low intensity of Raman response from TiN. The Raman spectrum was recorded from 100 to 1200 cm–1. Spectral manipulation such as baseline adjustment, smoothing, and normalization were performed using LabSpec 5 software. Band component analysis using the Fityk software package enabled the type of fitting function to be selected and specific parameters to be fixed or varied accordingly.

The Raman spectrum of a deposited TiN film is shown in figure 4. The Raman spectrum of the TiN layer can be fitted with Gaussian-Lorentzian peaks at 260, 330, 418, and 584 cm–1. The spectrum is the same as those of TiN films reported, also with very poor quality, in the literature (Y.H. Cheng et al., “Substrate bias dependence of Raman spectra for TiN films deposited by filtered cathodic vacuum arc,” Journal of Applied Physics, Vol. 92, 2002, pp. 1845–1849). Slight variations in peak position, shape, and relative intensity can be influenced by thickness (C.C. Chen et al., “Raman spectra of titanium nitride thin films,” Chinese Journal of Physics, Vol. 32, No. 2, 1994, pp. 205–210), treatment time, and deposition temperature of TiN films (R.R.M. de Sousa et al., “Cathodic cage plasma deposition of TiN and TiO2 thin films on silicon substrates,” Journal of Vacuum Science & Technology A, Vacuum, Surfaces and Films, Vol. 33, No. 4, p. 041502), as well as substrate bias. 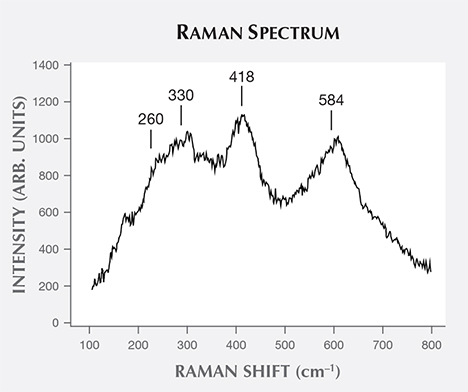 Figure 4. Raman spectrum of the TiN film in the 100–800 cm–1 region. The Raman bands are related to transverse acoustic (at 260 cm–1), longitudinal acoustic (330 cm–1), second-order acoustic (418 cm–1), and transverse optical (584 cm–1) modes of TiN, respectively (Cheng et al., 2002). The poor quality of the spectrum, despite a long collection time and enhanced sensitivity, is due to the faint response of the TiN to Raman investigation (as well as to the extreme thinness of the coating); it is comparable to the reported spectra available in the literature.

The TiN films also contained a small quantity of crystalline phase of TiO2 (i.e., brookite) that was identified in the bead coating using Raman spectroscopy. There was a close match between the collected spectrum and that of brookite available in the RRUFF database (R050363). The association of TiN and TiO2 films is well known and widely studied (de Sousa et al., 2015).

TiN deposition is widely used for the coating of small mechanical parts or tools, giving them a higher resistance to corrosion and scratching. Therefore, TiN films are essential for applications such as wear-resistant coatings, diffusion barriers, and optical coatings. The coating typically produces a golden hue, but other colors are also possible. Even though TiN films are common in industrial applications, this may be the first time such a coating has been reported in gemology.

Emanuele Costa is a researcher and professor in biomineralogy and environmental geochemistry in the earth sciences department, and Erica Bittarello is a PhD geologist graduate, at the University of Turin, Italy. Raffaella Navone is with the RAG Gemological Laboratory in Turin.