Examination of the Largest Canadian Diamond

With the first major discoveries made 25 years ago, diamond mining in Canada is relatively new. The Diavik mine, located in the Northwest Territories about 300 kilometers (190 miles) northeast of Yellowknife, began production in 2003. Today Diavik is Canada’s largest diamond mine by volume, producing approximately six to seven million carats of gem-quality diamonds annually. Much has been reported about Diavik’s extensive efforts (see the lead article of the Summer 2016 issue) to ensure the long-term protection of the land, water, and wildlife that are integral to local traditions and daily life in the Northwest Territories.

Adding to the significance of the Diavik mine was the spring 2015 recovery of the largest rough diamond ever found in Canada. GIA’s laboratory in New York recently had the opportunity to study this historic stone. The rough weighed 187.66 ct and measured 36.96 × 32.99 × 16.80 mm. Under standard color grading lighting conditions, it appeared pale yellow (figure 1). One side of the diamond displayed clear iridescent color banding due to light interference along the cleavage planes (figure 2, left). The stone showed irregular morphology, with a tabular shape, and was dominated by cleavage faces. Some original faces with dissolution pits were clearly visible (figure 2, center). 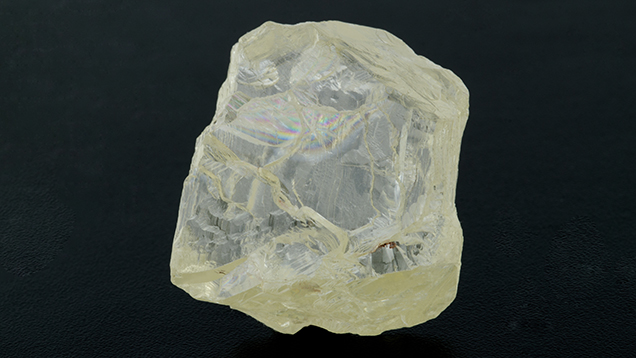 When observed under a gemological microscope, the irregular surface etching limited our ability to see clearly into all areas of the diamond. A dark mineral inclusion was noted near one side of the rough (figure 2, right), but little else was readily apparent. Crossed polarizing plates did not reveal any areas of strain. The stone exhibited moderate blue fluorescence to long-wave UV radiation and faint yellow fluorescence to short-wave UV; no phosphorescence was observed. Absorption spectroscopy in the infrared region revealed that it was a type Ia diamond with a very high concentration of nitrogen. A weak hydrogen-related absorption at 3107 cm–1 was also recorded. UV visible absorption spectroscopy, performed at liquid nitrogen temperature, showed typical “cape” lines, with clear absorption peaks at 415 and 478 nm. No other absorption was detected in the UV-Vis region. These gemological and spectroscopic observations confirmed that this was a natural, untreated diamond.

Figure 2. Iridescent color can be seen along the cleavage plane on one side of the stone (left). Dissolution pits are observed on the surface of the yellow rough (center), and a dark mineral inclusion is clearly visible near the surface (right). Photomicrographs by Kyaw Soe Moe; field of view 14.52 mm (left), 4.79 mm (center), and 7.19 mm (right).

The diamond, named the Diavik Foxfire, will undergo further scrutiny during the cutting process, in which it will be carefully designed, shaped, faceted, and polished. It will be interesting to see if the rough yields a significant main diamond or is cut into several smaller gems.

John King is chief quality officer, Kyaw Soe Moe is a researcher, and Wuyi Wang is director of research and development at GIA’s New York laboratory.

B. A. Kjarsgaard and A.A. Levinson