Jadeite, nephrite, serpentine, chalcedony, and quartzite were all referred to as “jade” in ancient China, where objects were defined by their craftsmanship rather than the materials themselves. The term is still widely used in the Chinese market for many types of materials. “Xiuyan jade” is actually a form of serpentine, so named for Xiuyan, a city in China’s Liaoning province where serpentine deposits are abundant.

The pendant in figure 1 was submitted to the Lai Tai-An Gem Laboratory by a client who claimed the material was jadeite jade. The pendant, which weighed 222.03 ct and measured 58 × 37 × 17 mm, showed a light green carved fish on a brown and yellow background. At first glance, it appeared to display a plastic-like luster.

Identical spot RIs of 1.56 were obtained from two different parts of the object, and an SG of 2.40 was determined. Both measurements were lower than expected for jadeite. The SG may have been affected by a polymer coating; this was partially confirmed when bubbles were observed on some surface areas under magnification. Microscopic observation proved that the piece was solid and not assembled. It was inert under long-wave and short-wave UV light from an ultraviolet viewing cabinet, whereas most polymer-coated objects show weak to strong reactions. The client granted permission to cut the piece in two for further analysis.

DiamondView observations of the cross section revealed an inert reaction from the object’s interior, but the coatings on the surface produced a strong bluish fluorescence (figure 2). FTIR spectroscopy on the interior identified the material as serpentine, but peaks at 3060, 3025, 2932, and 2858 cm–1, obtained from the surface, showed that a polymer was present. Peaks at 1045, 673, 564, and 485 cm–1, detected from both the interior and the surface, were indicative of serpentine (figure 3); this was confirmed by Raman spectroscopy.

Figure 2. DiamondView imaging showed that the inner portion of the serpentine was inert, while the surface exhibited a strong bluish fluorescence. These images show the reflection from the polymer-coated surface in visible (left) and UV light (right). Images by Lai Tai-An Gem Lab. 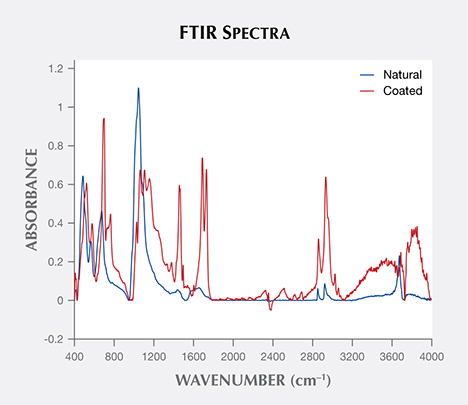 Coatings are normally applied to gem materials to improve luster and, in some cases, provide a degree of stability. This was the first case of coated serpentine we have encountered. Care should be taken to identify such coatings; the simplest way to detect the treatment is to check for any unusual reaction under the ultraviolet viewing cabinet, but in this case, the UV reaction only showed in the ultra-short-wave UV of the DiamondView. Serpentine’s characteristically low hardness makes it a very suitable carving material, but any treatments applied to it should be fully disclosed.