Due to nitrogen vacancy and hydrogen complexes, as-grown CVD synthetic diamonds are usually brown, which are less desirable than other colors. Post-growth treatments such as high-pressure, high-temperature (HPHT) treatment and/or irradiation and annealing, are applied to these synthetics to create attractive colors. In the past, we have reported HPHT-treated and multi-step treated pink CVD synthetics. Recently, the New York lab examined three pink CVD-grown diamonds that were treated with the technique known as low-pressure, high-temperature (LPHT) annealing.

The 0.37 ct rectangle, 0.31 ct rectangle, and 0.25 ct round brilliant were graded as Fancy Deep brownish orangy pink, Fancy Deep brown-pink, and Fancy brown-pink, respectively (figure 1). They were classified as type Ib diamond containing single substitutional nitrogen atoms (Ns0) with absorption bands at 1130 and 1344 cm–1 (figure 2). The 0.37 ct sample contained a VS2-grade feather and a few burn marks on the main facets; otherwise, all three were very “clean.” The DiamondView images showed typical orange fluorescence and linear growth striations, which are caused by uneven uptake of defects along the growth steps (again, see figure 1). The orange fluorescence is usually observed in N-doped CVD synthetics. 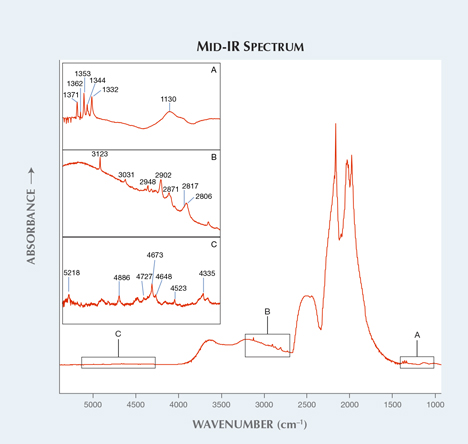 Figure 2. These CVD synthetics are classified as type Ib with Ns0 atoms at 1130 and 1344 cm–1 (inset A). The LPHT annealing was revealed by C-H stretching bands, as seen in inset B. Additional unknown bands were also observed (inset C).

Figure 3. Absorption maxima at approximately 525 nm and N-V centers are responsible for the pink color in these samples. The H3 center can be observed, along with many unknown bands.

HPHT annealing can be achieved at temperatures ranging from 1800–2500°C and pressures greater than 5 GPa. High pressure is required in order to prevent graphitization, especially in natural diamond. In contrast, LPHT annealing is performed at temperatures 1400–2200°C and pressures below 300 torr (3.99 × 10–5 GPa, below atmospheric pressure) (again see Meng et al., 2008). Graphitization became significant above 2200°C. At temperatures above 700°C, vacancies started to move and were trapped at single substitutional nitrogen atoms, creating N-V centers; however, nitrogen atoms become mobile at temperatures above 1700°C, causing the N-V centers to anneal out. Therefore, strong N-V centers (which are much greater than the diamond Raman peak) in the 514 nm PL spectra of these samples suggested that they were annealed at temperatures below 1700°C. Lack of a peak at 3107 cm–1 is also suggestive of an annealing temperature below 1700°C. This upper temperature limit is further supported by presence of a band at 3123 cm–1, which can be annealed out at above 1800°C. Incorporation of H3 center occurs above 1500°C; thus, annealing temperatures for these samples can be proposed as 1500°C < T < 1700°C. According to Meng’s experiment, this temperature range can be correlated with pressure from 150 to 200 torr, with annealing time from 10 to 720 minutes.

Brown as-grown CVD synthetics have been changed to brownish pink by LPHT annealing for 15 minutes by Meng et al. (2008); they were also able to improve colorless CVD-grown diamonds by an average of three color grades. LPHT treatment may have created the attractive pink hue in these samples, although it could not completely eliminate the brown coloration. We expect to encounter more LPHT-treated diamonds in the future.

Kyaw Soe Moe is a research associate, Ulrika D’Haenens-Johansson is a research scientist, and Wuyi Wang is the director of research and development at GIA's New York laboratory.