Radioactive elements such as thorium and uranium existed at higher concentrations during earlier ages of the earth; crystal formations from these periods were therefore more susceptible to acquiring higher concentrations of these materials. Zircon has a particular affinity for attracting rare earth elements such as uranium and thorium into its crystal structure due to similarities in the three elements’ cation sizes, which allows U and Th to substitute for Zr in the crystal lattice, and other bonding properties such as coordination, electronegativity, and cation change. The isotopes break down through radioactive decay, releasing harmful doses of radiation to the host crystal. This destroys the crystal structure of zircon until it is nearly amorphous, in a process called metamictization (J.A. Woodhead, “The metamictization of zircon: Radiation dose-dependent structural characteristics,” American Mineralogist, Vol. 76, 1991, pp. 74–82).

In gemology, zircon is categorized by the degree of radioactive degradation that has taken place. Highly degraded material with little to no crystal structure remaining is termed “low” or “metamict” zircon. “High” zircon is crystalline and nearly unaffected by radiation, while “intermediate” zircon is semi-crystalline, between the amorphicity of low zircon and the ordered crystalline structure of high zircon.

Five zircon samples were analyzed in this study based on their apparent crystallinity (figure 1). Raman spectroscopy shows the degradation of the crystal structure from its original structure, which can be illustrated by comparing it to zircon that has not been affected by radiation (figure 2). Infrared spectra (figure 3) also show differences between the low and high zircons, as the former displays peak broadening and baseline irregularities. 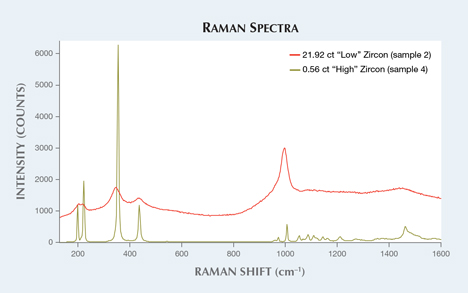 Figure 2. Raman analysis of samples 2 and 4, illustrating the difference between “low” and “high” zircons. Low zircon displaying amorphicity by peak loss and broadening. 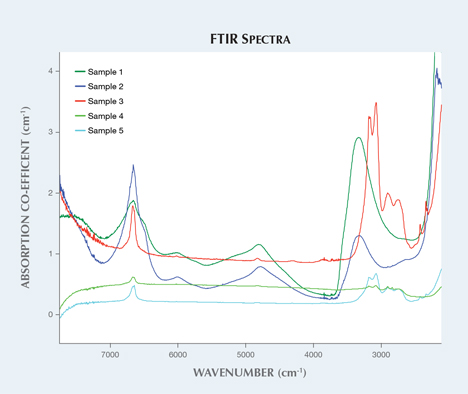 Figure 3. FTIR spectra of the zircon samples. The metamict zircons, samples 1 and 2, display an undefined baseline and broader bands than the high zircons.

Trace-element analysis of high and low/intermediate zircon using LA-ICP-MS illustrated variations in concentrations of several elements, including thorium, uranium, and lead. While uranium and thorium are easily incorporated into the crystal structure, the same is not true for lead, which can only appear in zircon as the byproduct of the radioactive decay chains of thorium and uranium. Due to this property, scientists have been able to accurately date zircons and Earth’s age using isotope ratio analysis by comparing the lead to uranium (238U/206Pb) and lead to thorium (232Th/208Pb) ratios. These results showed the low zircon samples to be far older than the high zircon. Isotopic elemental analysis using LA-ICP-MS (table 1) determined that the low zircon was approximately a billion years old. This is far older than the high zircon samples, which were determined to be approximately 100 million years old. The higher content of radioactive elements earlier in Earth’s formation, along with the longer period of time for metamictization to occur, contributed to the structures of the low zircons.


Trace-element analysis combined with spectroscopy can also detect treatments in zircon. Heat treatment, which is commonly performed on all types of zircon for color modification, can reestablish the crystal structure that was originally destroyed by natural processes. Zircon crystals with high lead content must have experienced a considerable amount of radiation exposure, leading to their lower crystalline order. High-lead zircon samples that show an ordered crystalline structure could have initially been low or intermediate and heat treated to restore the crystal structure. By correlating the trace-element chemistry with other analytical tools such as Raman spectroscopy, it may be possible to determine heat treatment of some types of zircons.

Nearly all blue and near-colorless zircons have undergone heat treatment, as these colors are rarely found in nature; the majority of zircon rough is brown. The blue color of zircon is theorized to come from the chromophore U4+ cations, depending on how the uranium cations interact within the crystal structure. “Electric” blue zircon’s color is typically produced by heating the stone to 1000°C in a reducing environment, while near-colorless material is produced at about the same temperature in an oxidizing environment. Heat treatment of zircons that have not had significant radiation damage can restore the crystallinity at the temperatures used for color modification treatments. Although very metamict zircons must undergo higher temperatures and longer duration of heating to restore a degree of crystallinity, these zircons will never achieve the electric blue color. It is difficult to even produce gem-quality material from this material. Zircon with poor crystallinity has more variation in polycrystalline grain orientation, bond length, element location, and bonding, as well as varying amorphicity. Knowledge of zircon’s chemistry can facilitate the identification of treatments and growth conditions, and can be applied to determine various correlations pertaining to color and origin.

The Chinese Red Feldspar Controversy: Chronology of Research Through July 2009

Red copper-containing plagioclase feldspar from Oregon has been available for over a century.