The Jade West Group, a leading nephrite jade company in North America for the past 30 years, drew many buyers at their 2015 GJX booth. Prized in Chinese culture for over 5,000 years, nephrite regained its momentum in the domestic Chinese market after the 2008 Beijing Olympics, when it was used in the gold, silver, and bronze medals (figure 1). The Chinese government launched a campaign promoting the significance of nephrite jade in the country’s history. This reignited the love of nephrite among the Chinese people, and the increasing demand and price drove a new surge of jade rush in northern British Columbia (BC).

A tectonic belt running from Alaska through British Columbia to Mexico favored the formation of nephrite. Tectonic and lithological contacts are the predominant ore body controls. BC has more than 50 known nephrite deposits, distributed mainly along tectonic inclusions of country rocks, dikes, and mafic rock layers within serpentinites, or along the contact between serpentinite and the wall rocks. This formation is very similar to other green nephrite occurrences all over the world. Nephrite is found both in situ and as boulders; the Polar Pride boulder, found in BC’s Polar mine, is a well-known example of the latter (figure 2).

Figure 2. Half of the Polar Pride jade boulder discovered in the Polar jade mine. The original boulder weighed 18 tons. Courtesy of Jade West Group.

Nephrite boulders are the products of erosion from the last ice age. They are usually drilled or sawed to test the quality, and only the good-quality material is transported for sale. While some of today’s nephrite is from boulders, primary deposits supply the bulk of BC’s production. This is partially due to the lack of high-quality boulders; however, the growing demand and price for nephrite also make it profitable to mine the primary deposits.

According to Kirk Makepeace, president of Jade West Group, the price of jewelry-grade jade from BC (figure 3) experienced at least a tenfold increase from a decade ago. Before 2008, top-quality nephrite from BC sold for about $20 a kilo; equivalent stones now range from $200 to $2,000 a kilo.

Figure 3. This strand of 41 nephrite beads is comprised of material from British Columbia’s Polar Mine. Photo by Robert Weldon; courtesy of Jade West Group.

The annual production of BC nephrite jade is about 400 tons. Most of the production comes from four active mines; together, they produce about three-quarters of the world’s high-quality green nephrite. Of these four, Jade West operates the Polar, Ogden, and Kutcho Jade mines. Jade West also deals with material from Wyoming and Siberia. Over the last 10 years, approximately 90% of the company’s BC production was exported to mainland China; the remaining 10% was sent to Taiwan, Vietnam, and Thailand. 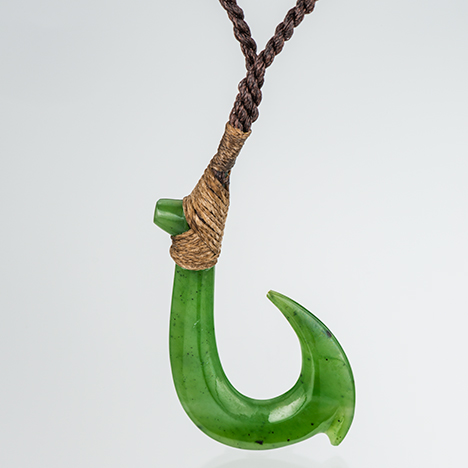 Figure 4. This Canadian Jade Fish Hook pendant features a piece of nephrite from the Kutcho Mine. This is one of the styles Jade West has customized for the North American market. Photo by Robert Weldon, courtesy of Jade West Group.

Jade West sends almost all of its rough nephrite to Guangdong for carving and jewelry manufacturing, with designs customized for different markets (figure 4). In addition to traditional carvings and jewelry, there is demand from Southeast Asian countries for giant Buddha statues and from Western countries for home decorations. This demand leads Mr. Makepeace to be very optimistic about the future availability of BC nephrite.

Tao Hsu is the technical editor of Gems & Gemology.