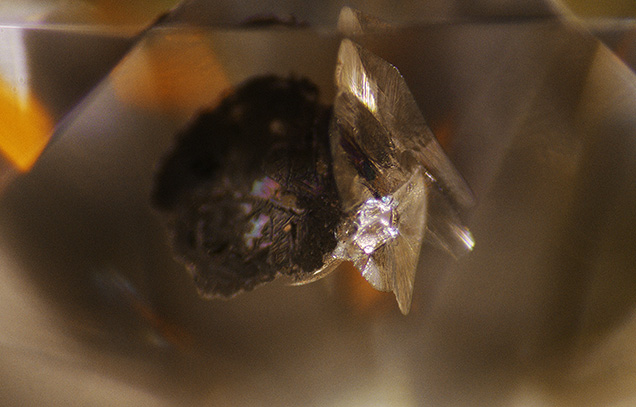 Figure 1. This 0.70 ct natural diamond contained an inclusion of wollastonite and CaSiO3-breyite with a large disk-like graphitic fracture due to exhumation from the mantle. Photomicrograph by Garrett McElhenny; field of view 1.15 mm.

The Carlsbad laboratory recently examined a 0.70 ct, E-color round brilliant. Infrared spectroscopy showed this to be a type IIa diamond, so we performed a variety of additional spectroscopy and imaging to verify its natural origin. This diamond also had I1 clarity due to a large inclusion under the table (figure 1). Raman analysis of the inclusions verified that this crystal was a metastable composite of the minerals wollastonite (CaSiO3) and CaSiO3-breyite (E.M. Smith et al., “The very deep origin of the world’s biggest diamonds,” Winter 2017 G&G, pp. 388–403), which indicates a sublithospheric origin. These minerals are believed to be the lower-pressure phases of CaSiO3-perovskite. Around these minerals were large disk-like graphitic fractures indicating inclusion expansion as pressures on the diamond reduced during exhumation from the mantle. The other inclusion present was unidentifiable due to its graphitic casing. Recent research of inclusions in other type II diamonds shows that many, if not most, have a superdeep origin (again, see Smith et al., 2017). This stone is one more example of diamonds forming at incredible depths of 360–750 km before being transported to near the surface. 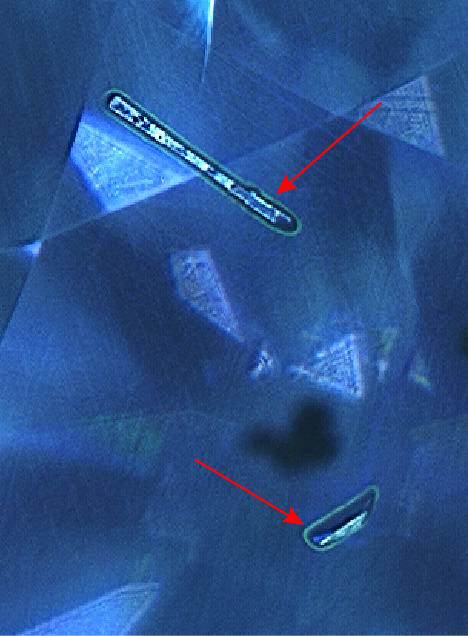 Figure 2. This DiamondView fluorescence image of the table and crown facets shows green fluorescence halos around two cavity features (as indicated by the red arrows). The green fluorescence, caused by the H4 defect, was caused by localized radiation within those cavities while the diamond resided within the earth’s crust and was exposed to radioactive fluids.

But even after such a tumultuous journey, the earth was not finished writing the story of this diamond. While in the earth’s crust, the diamond was exposed to radioactive fluids, particularly in etch channels now in the form of cavities on the table and crown facets. DiamondView imaging revealed fluorescing green halos around these cavities (figure 2). Although these isolated areas of fluorescence around the cavities indicated they had likely been filled with a radioactive fluid, there was none of the greenish color or radiation staining that would likely accompany higher radiation doses.

Photoluminescence (PL) mapping with 532 nm (figure 3) and 455 nm (figure 4) excitation shows a pronounced increase in radiation-related defects such as GR1, 3H, and TR12 and other vacancy-related peaks such as NV–, NV0, and H4 (a B aggregate with an additional vacancy) within these cavities (figures 3 and 4). Although this diamond was type IIa, there was sufficient nitrogen to form related defects that could be observed at the lower level of detection of PL spectra.

Figure 4. A photomicrograph (top left) of the lower cavity pictured in figure 2 is also shown in a 455 nm PL map (top right) displaying a false-color image of the H4 intensity. The corresponding spectra (bottom) for two points from the red and blue color regions are shown. Although the spectra were collected at only ~50 μm distance, there are pronounced differences in peak intensities. The diamond Raman peaks within the two spectra are scaled as equal. Photomicrograph by Sally Eaton-Magana.

A number of other peaks often seen in natural diamonds but not yet identified, such as those at 490.7, 498, and 505 nm, also showed elevated concentrations in these cavities; their enhanced presence due to natural radiation was consistent with prior observations (I.A. Dobrinets et al., HPHT-Treated Diamonds: Diamonds Forever, 2013, Springer). The width of the fluorescence halos in figure 2 and the elevated GR1 shown in figure 3 is approximately 30 μm, consistent with the penetration depth of alpha radiation (S. Eaton-Magaña and K.S. Moe, “Temperature effects on radiation stains in natural diamonds,” Diamond and Related Materials, Vol. 64, 2016, pp. 130–142). We know this radioactive fluid exposure must have occurred in the crustal region because many of the features, such as 3H, would not survive if this exposure occurred at greater depths and, therefore, higher temperatures.

These localized effects of radiation are particularly interesting because the dose was low enough to not impart green coloration or green to brown radiation stains. Nevertheless, the radioactive fluids left their mark on this diamond with the green fluorescence halos around the cavities, providing an excellent example of how many peaks are enhanced by radiation compared with the unaffected portions within the remainder of the diamond. It is also interesting that two distinctly different geological conditions and depths within the earth both contributed to the gemological characteristics of this diamond. The sublithospheric depths imparted some notable minerals as evidence of its superdeep formation, and radioactive fluids within the shallow, crustal region of the earth created the green-fluorescing halos and other radiation features.

Sally Eaton-Magaña is senior manager of diamond identification, and Garrett McElhenny is an analytics technician, at GIA in Carlsbad, California.

Explores an exceptional family of diamonds, referred to as “CLIPPIR” (Cullinan-like, Large, Inclusion-Poor, Pure, Irregular, and Resorbed), that formed in a superdeep environment.