Jeff Hapeman of Earth’s Treasury (Westtown, Pennsylvania) loves a gemstone with a good story. Whether it’s the story of a young couple buying one of his Montana sapphires for an engagement ring or the amethyst he dug out of the ground on an Amish farm in rural Pennsylvania, Hapeman feels that every gemstone needs a story. His own story starts with a boy reading old rock and mineral magazines, staring in fascination at the new find of blue-cap tourmalines coming out of Pala, California, in the early 1970s. These images were fresh in Hapeman’s mind when he took a break from his career in finance technology in Southern California to work at the Oceanview pegmatite mine. One of the miners thought he might have the talent for cutting stones and pushed him to take up faceting.

Since cutting his first gemstone in 2013, Hapeman has developed his own style, creating designs he describes as “somewhat modern and somewhat classic at the same time.” The modern elements are seen in the elegant but slightly angular and geometric appearance of many of the stones he cuts. At the same time, Hapeman claims there is a simplicity to his designs, even though “simple” is certainly not a term that comes to mind when you see his work. His designs are often born out of necessity as he fits the cut to work with a piece of rough that would not work with his previous designs. One of his more recognizable designs is the Helena cut, named in honor of Montana’s state capital. Rough Montana sapphires are often found in flattened, slightly oval shapes. Ovals are among the least rewarding stones for many lapidary artists. Even when skillfully executed, the results can be boring. And yet, through a fine balance between rigorous mathematical modeling and his own gut feeling and intuition, Hapeman has managed to produce a visually interesting oval cut that is well suited for Montana sapphires, deepening the color of these typically pastel-hued gemstones (figure 1).

Montana sapphires have become particularly important in Hapeman’s career. He became involved with the Potentate Mining operation at Rock Creek as they were developing their mine. Montana sapphires can be trickier to cut than blue sapphires from Asia and Africa. While they often have exceptional clarity, fine cutting can greatly benefit Montana sapphires due to their sometimes lighter pastel colors and pleochroism. Early on, Hapeman cut many Montana sapphires in order to demonstrate this to Potentate Mining. Since then he has become one of the most prominent cutters working with Potentate’s production, and he often collaborates with them to cut and market some of their larger and finer stones. 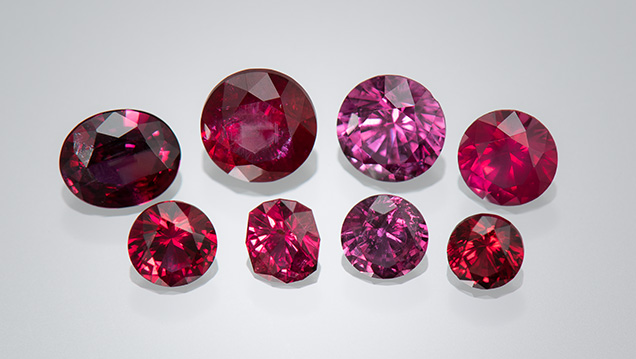 Figure 2. A collection of eight Montana rubies from Rock Creek, mined by Potentate, ranging in weight from 0.172 to 0.578 ct. Photo by Kevin Schumacher, courtesy of Jeffrey R. Hapeman, Earth’s Treasury.

When sourcing material, Hapeman seeks out the unusual. His involvement with Potentate gave him the opportunity to cut several exceptionally rare Montana rubies from the Rock Creek deposit (figure 2). Unlike some lapidary artists, he actually likes cutting round brilliants, as he appreciates the beauty and symmetry of a perfectly executed cut. He especially seeks out materials with high luster and dispersion for his experiments with round brilliants, such as the scheelite from China in figure 3. 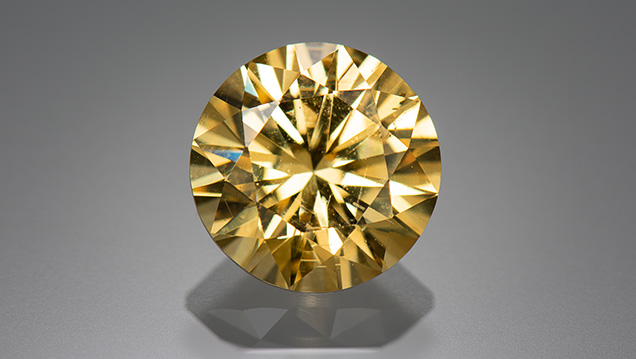 Hapeman also discussed the use of social media in the gem and jewelry industry. Social media has helped cutters like him who deal largely in nontraditional stones by allowing them to reach clients with eclectic tastes. It has profoundly reshaped the gem industry by giving more control to end consumers to purchase exactly what they want. Hapeman said that those in the gem and jewelry trade who can harness social media will gain a competitive edge. This is especially true for the younger generation of cutters and designers, who are using social media to find a market for gems and jewelry that could have been hard to move 10 or 20 years ago.

Jeff Hapeman Discusses His Style
About the Author

Aaron C. Palke is a senior research scientist at GIA in Carlsbad, California.

Potentate’s Montana Sapphire Mine: An Interview with Warren Boyd

The history of the American West is told in stories of frontiersmen seeking fortune in gold and other precious metals.