At the AGTA show, Rod Griffin (Rod Griffin Boulder Opals, Silverado, California, and Queensland, Australia) told us that the world market for all types of opals continues to be strong, but Australia’s opal industry is shrinking due to the costs, challenges, and changing regulations of mining. He also cited recent flooding in Queensland as a challenge; opal mining in Australia has traditionally been difficult due to severe weather and rugged terrain. At the 2018 show, we heard that production of Australian boulder opal (figure 1) was low, with fewer than 30 people mining it in Queensland.

Griffin began mining opal in 1960 with a borrowed jackhammer and a lighting plant, in Andamooka, South Australia, 600 km (~372 miles) north of Adelaide. His methods have evolved considerably in the decades since. Along with standard equipment such as bulldozers, drills, and excavators, he recently began using gamma-ray logging for prospecting, and he will add drone magnetometer surveys and subsurface radar this year.

Mining is in Griffin’s blood. His great-great grandfather worked in South Australia’s Burra copper mines in the 1800s. Griffin’s own introduction to mining was at his uncle’s opal operation in northern South Australia. His uncle, who began with six camels and a scraper, eventually had one of the first bulldozers used in opal mining.

Griffin’s first find, at Andamooka, was black opal matrix in the bulldozer ramps. In 1970 he found more, in the 17 Mile Field in Coober Pedy. In 1976 he sold $400 (~$1,800 in 2019) worth of white Coober Pedy opal and boulder opal, bought a squareback Volkswagen, and traveled around the United States selling opal. He first exhibited in Tucson in 1977, at the Pueblo Inn (now the Riverpark Inn). “From that day on, I’ve been working all my life in opal,” he said.

Since then Griffin has mined in New South Wales—where he was the first to bring a tumbling machine to White Cliffs and to use a drill in the Sheepyard field at Lightning Ridge—and South West Queensland, where he and a friend found success using an excavator for the first time. His current operations are in South West Queensland, where he owns the 40-acre Elusive mine in Koroit and will be prospecting west of Quilpie this year. 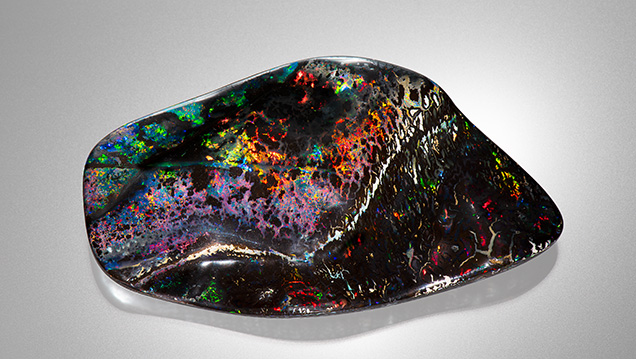 Figure 2. This 245 ct boulder opal came from an open cut in the Elusive mine. The flame-like pattern is unique to Elusive. Photo by Kevin Schumacher, courtesy of Rod Griffin Boulder Opals.

People thought Griffin was crazy when he bought the Elusive mine in 2013–it was said to be depleted after more than a hundred years of mining. But he found opal 22 feet below ground and has been finding it at 22 to 25 feet for the last several years. The mine is known for boulder opal with the light pattern of color seen in figure 1. Elusive also produces boulder opals with a flame-like pattern (figure 2), which Griffin said is unique to this mine. He added that because the stones were found at a shallow depth and the area is dry, they are stable and will not craze or crack.

Rod Griffin talks about his background in opal mining and his plans for mining in Quilpie this year.

In 2017 Griffin worked with two geologists to explore the Elusive mine using gamma-ray logging, which measures naturally occurring radiation in the ground to determine the potential presence of opal. According to Senior and Chadderton, microscopic lattices of silica spheres that produce precious opal’s play-of-color contain radioactive elements (“Natural gamma radioactivity and exploration for precious opal in Australia,” The Australian Gemmologist, No. 23, 2007, pp. 160–176). Gamma-ray logging of drill holes and open-cut mines has detected slightly higher radioactivity around opal deposits and led to new discoveries of opal in Queensland and New South Wales. At Elusive, it was determined that at the current rate of mining, at least seven years’ worth of reserves remains. Later in 2017, in several areas of the mine that had previously been explored without success, gamma-ray logging led to the detection of 1,230 opalized specimens, 30 of which were gem quality.

Griffin said this year he will use gamma-ray logging in prospecting 200 miles west of Quilpie; he will also use drones and subsurface radar for the first time. The drones will be fitted with magnetometers and flown a few feet above ground to measure magnetism and locate ironstone anomalies. Subsurface radar will determine the composition below the ground. Regulatory agency permitting has been secured for the property, and an indigenous land use agreement is in place. But Griffin said there has been a delay in the landowner acknowledging a standing agreement with the miners; he has seen more challenges in obtaining the agreement of all involved parties in recent years.

“There are easier ways to make money,” Griffin said. “But I actually feel that I’m in heaven at the moment, doing what I want to do, because I think I found my peace in life.”

Duncan Pay is the editor-in-chief of Gems & Gemology. Erin Hogarth is a writer and editor in Learning Design and Development at GIA in Carlsbad, California.