Pala International (Fallbrook, California) reported a very strong AGTA show, a common sentiment among vendors there. This was clearly evident to us, as many buyers were actively looking at and purchasing items while we were at the booth. Popular colors on display at Pala matched what we saw elsewhere at the show: electric blues, teals, hot pinks, hot yellow-greens, and pastels.

When asked what was new, Bill Larson showed us a suite of spectacular sphenes mined in 2017 from Zimbabwe, ranging in size from about 5 to 40 ct (figure 1, left). The response to this material was very positive, and one of the pieces had already sold on the first day of the show. Larson also showed us two exceptionally fine purple sillimanites (figure 1, right).

Figure 2. Electric blues were seen, including a 36.11 ct blue zircon from Cambodia (left) and a 23.90 ct chrysocolla mined in the 1950s from the Old Globe mine in Miami, Arizona (right). Photos by Kevin Schumacher.

Electric blue stones were popular throughout the show, either loose or in jewelry items. At the Pala booth we noticed many examples such as blue zircon and chrysocolla (figure 2), as well as Paraíba tourmaline and neon apa­tite. Also popular were electric pinks in the forms of rhodochrosite, pezzottaite, sapphire, and spinel. 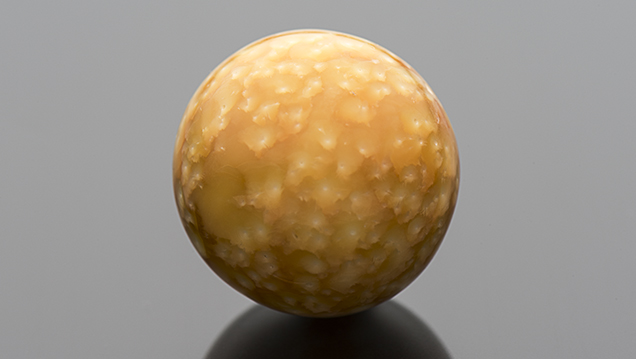 Non-nacreous pearls were also to be found in both the AGTA and GJX shows, such as the large round Melo pearl offered by Pala (figure 3).