Rex Guo: The Science and Art of Recutting Fine Gemstones

Deciding how to cut a gemstone is inevitably one of the most difficult decisions when transforming a piece of rough into a fine faceted gem. The three main factors to consider are final carat weight, color, and light performance (a general term describing the brilliance and scintillation of a faceted stone). In most cases, optimizing one of these factors comes only by sacrificing something else. This is especially true for light performance, which often suffers at the expense of carat weight. The colored stone market has historically demanded that cutters produce goods with the highest possible weight in the finished stone. This often leads to cuts that are not designed to optimize light performance. In recent years, however, there has been an increasing demand in the high-end colored stone market for precision cuts and optimized light performance. This year at Tucson we had the chance to sit down with Rex Guo, whose Singapore-based Sutra Gems focuses on sourcing and systematically recutting faceted stones to unlock their inner beauty.

Guo is a self-taught gem cutter who came into this profession after spending 20 years working with computer graphics and video editing software. In 2015, he decided to take a sabbatical from software to pursue his passion for gemstones. The seed of his passion was planted during childhood, when he discovered an amethyst geode among a pile of sand in his schoolyard. This inspiration stuck with him and was fueled by years of formal engineering studies, which now serve as the backbone of his lapidary art. This technical foundation led to his realization in 2016 that optimizing the interaction of light with a faceted gemstone was exactly the sort of problem he had been working on for 20 years in 3D graphics software. Guo’s mathematical mentor, the late Professor Timothy “Geometeer” Poston, was the inspiration for one of his latest creations, currently featured in the Somewhere In The Rainbow exhibit at the University of Arizona Gem and Mineral Museum. The Geometeer (figure 1), dedicated to Poston, is a precision-cut synthetic ruby in an innovative hybrid brilliant-Portuguese cut designed with Guo’s proprietary gem design and optical simulation software, Axiom.

Rex Guo’s Gem Cutting Journey
Rex Guo reflects on how his previous career as a software editor impacts his current work as a self-taught gem cutter who recuts faceted stones.

While Guo enjoys the privilege of cutting from fine gem rough, about 80% of his work is in recuts. Given the ever-increasing price of rough material, recutting provides an opportunity to work with very fine material that would otherwise be difficult to obtain. He starts with excruciatingly accurate measurements of the geometry of the original faceted stone. Every angle of every facet must be recorded for input into Axiom. This software allows him to experiment with many possible recut designs to see how changing any single facet will affect the appearance of the final stone. Guo works very closely with his clients in this stage of the process to ensure they are getting what they want out of the recut. There are multiple paths that can be taken. The stone can be recut with an emphasis on saving weight, or a bolder design can be chosen with better light performance to bring out the stone’s inner beauty, but with more significant weight loss. At this point Guo finds he has to walk a fine line between presenting himself as a master craftsman and as a scientist. While diagrams from his software are useful to show clients various options, he avoids coming across as overly technical so as not to detract from the emotional and romantic aspect of his craft. He quips, “Machines and software don’t understand beauty—humans do.” 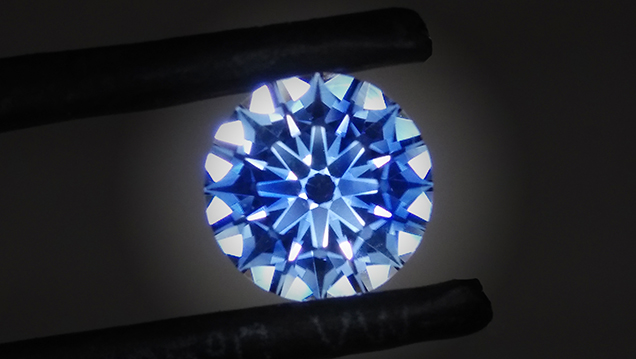 Guo is very much on a journey through the world of gemstone faceting. He started with round patterns, as most cutters do. Once he understood rounds, he moved on to optimizing trilliant and oval cuts. In the future, he plans to experiment with squares, rectangles, and more. The light performance–optimized cuts in which he specializes are best exhibited in high-RI materials. For this reason, he has set a minimum refractive index of 1.72 for stones he works with, a playing field that includes spinel, zircon, garnet, ruby, and sapphire (figure 2). Test cuts are often used before recutting important stones.

Spinels are one of his favorite stones to cut. The high RI and rich color of fine spinel produce stones that are “just divine.” Zircons are another favorite, as they have a much higher RI than most other natural stones. With such a cornucopia of gem materials in front of him, Rex Guo’s lapidary journey has just begun.

Aaron C. Palke is a senior research scientist at GIA in Carlsbad, California. Wim Vertriest is supervisor of field gemology at GIA in Bangkok.