Figure 1. The calcite object (left, in daylight-equivalent light) showing a moderate green overall phosphorescence after short-wave UV exposure (right). The object emits a very strong whitish phosphorescence from one area, as seen in the center of the right image. Photos by Lai Tai-An Gem Lab.

Asterism, chatoyancy, color change, and play-of-color are phenomena that are caused by the interaction of light with the host’s structure or from its inclusions. Fluorescence, on the other hand, is the emission of light by a substance that has absorbed light or other electromagnetic radiation. Fluorescent materials immediately cease to glow when the radiation source is turned off; phosphorescent specimens continue to emit light for variable periods after the radiation ceases. Previous studies (Spring 2005 Lab Notes, pp. 46–47; Summer 2012 Lab Notes, pp. 139–140) have reported on the misnomer “night glowing pearls,” which are in fact not pearls at all but round rocks of mineral species that exhibit phosphorescence. Most of this material in the Chinese market has been treated in a variety of ways and in fact does not phosphoresce naturally.

A partially carved white ovoid with a greasy luster and golden paint within the low-relief carved features (figure 1, left) was submitted for identification to the Lai Tai-An Gem Lab. The submitting client claimed it was a “night glowing pearl.” The object weighed 796.71 ct and measured 48 mm in diameter. A spot refractive index reading of 1.59 and a specific gravity of approximately 2.66 indicated that the object was most likely calcite. This was later confirmed by Fourier-transform infrared (FTIR) and Raman (figure 2) analysis. Initial exposure to short-wave (254 nm) and long-wave (365 nm) UV light (cabinet and lamp respectively) failed to elicit any initial visible reaction; however, both short-wave and long-wave UV did initiate some fluorescence after about 15 minutes. When observed in a dark environment, moderate green phosphorescence lasting more than 10 minutes was noted, with strong whitish phosphorescence concentrated in one area (see figure 1, right). 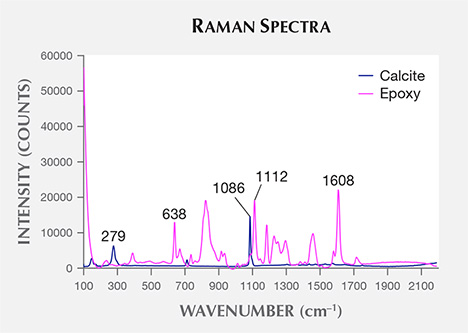 Microscopic inspection of the area showing the white phosphorescence revealed that the reaction originated from within the object, and did not emanate from the entire outer surface. The microscope revealed a few tiny bubbles comprised of solid epoxy resin (figure 3, left). This translucent epoxy acted as a plug to an opening into the (assumed hollowed out) interior, where a highly phosphorescent material was placed to create the calcite’s glowing effect. It was therefore understandable why this small capped area showed the strongest reaction (figure 3, right). 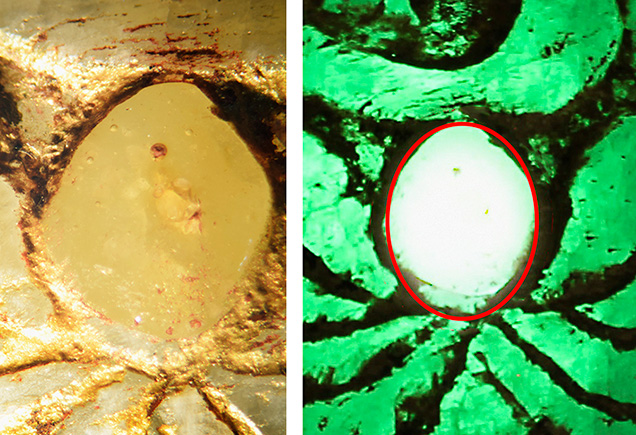 Figure 3. Left: Tiny bubbles were observed in the cavity under magnification. Field of view 6.2 mm. Right: The filled cavity showed stronger phosphorescence because the epoxy resin is more transparent than its calcite host. Field of view 11.6 mm. Photos by Lai Tai-An Gem Lab.

The trade name “night glowing pearl” used in Asian markets mostly refers to natural fluorite, but some fluorite is treated with a coating containing rare earth elements (REE) such as europium (Eu), dysprosium (Dy), or neodymium (Nd) to add or enhance phosphorescence. The sample submitted was calcite, consisting mainly of calcium, as confirmed by energy dispersive X-ray fluorescence (EDXRF). However, no Eu, Dy, Nd, or any other REE were detected, proving the material was not luminiferous. It therefore seems more logical that the phosphorescence originated from material below the ovoid’s surface.

It is interesting to note that the same client also submitted a jadeite jade sphere that was fashioned and treated in a similar manner. The cap on the jadeite piece used to plug the void was itself a piece of jadeite. Since destructive testing was not permitted on either item, analysis of their interiors was not possible. This technique of placing a phosphorescent material inside a hollowed-out stone object appears to be applicable to any material, so those in the trade should be aware when examining similar objects.