While various combinations of materials are used to form doublet gems, we seldom see doublets consisting of the same materials. Ruby/ruby doublets (Spring 1987 Lab Notes, pp. 47–48; Spring 1996 Lab Notes, p. 49) as well as a tourmaline/tourmaline doublet (Summer 1990 GNI, pp. 165–166) have been reported, but a doublet consisting of two sections of natural emerald has not been previously documented.

GIA’s Tokyo laboratory recently examined a 1.81 ct transparent green octagonal step cut that measured approximately 7.22 × 6.71 × 5.55 mm (figure 1). Standard gemological testing indicated an SG of 2.71, with an RI of 1.572–1.580 on the crown and 1.570–1.578 on the pavilion. A chromium spectrum consistent with emerald was visible with a handheld spectroscope. Upon first glance, this stone appeared to be a natural Colombian emerald, but careful examination easily revealed its doublet nature, while Raman spectroscopy confirmed that both the top and bottom portions were indeed beryl.

Microscopic observation revealed a very flat separation plane below the girdle, crossing the pavilion diagonally. Flattened gas bubbles were visible along the plane (figure 2, left), and a blue and orange flash effect was also apparent. Jagged three-phase inclusions typical of Colombian emeralds were visible in both parts, while fine growth tubes and fingerprints in helix patterns were seen only in the top portion. Inclusions did not cross the boundary between the two sections. Under long-wave UV light, the top showed a stronger red fluorescence than the bottom, with a distinct boundary between the two (figure 2, right). A whitish fluorescence was also observed along the plane. Illumination using crossed polarizers revealed that the top and bottom portions had different optical orientations, with two optic axes visible (figure 3). Typical of most emeralds, enhanced fractures showing a flash effect were found in both parts.

Figure 2. Left: Flattened gas bubbles are visible along the separation plane of the doublet. Field of view approximately 3 mm. Right: Viewed under long-wave UV light, the doublet displayed strong red fluorescence in the top portion but not the bottom. A distinct boundary between the two parts is clearly visible. Photos by Ahmadjan Abduriyim. 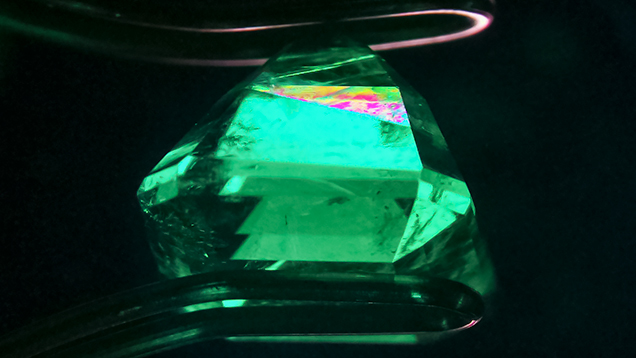 Figure 3. When the doublet was viewed under crossed polarizers, different optical orientations were apparent. At this angle, interference colors along the optic axis are clearly visible in the bottom portion but not the top. Photo by Claire Ito; field of view 11.60 mm.

Immersion with methylene iodide revealed green angular zoning in the bottom, whereas the top had even, saturated green color. Both sections appeared to have enough green color to be considered emerald. The glue along the separation plane was colorless. This is unusual, as assembled imitations of emerald are often composed of pale beryl or other colorless materials with a green cement layer. We could only speculate on the circumstances leading to the creation of this unusual doublet.