Recently the Gem Testing Laboratory in Jaipur had an opportunity to examine an unusually large yellow, semi­transparent to translucent carving (figure 1). This 1,871 g (9,355 ct) piece measuring approximately 18.50 × 15.10 × 7.30 cm was fashioned after Lord Mahavira, one of the ancient Indian sages who established the tenets of Jain Dharma. Initial observations suggested beryl due to the color, medium heft, and cloudy liquid inclusions visible to the unaided eye. Gemological testing ruled out that possibility, however. Spot RI was approximately 1.61, with a small but distinct birefringence blink, while hydrostatic specific gravity measured 3.00. The carving was inert to UV radiation.

Figure 2. Examination of the carving with a hand loupe revealed reflective liquid films (left), elongated phase/short tubes oriented in one direction and aligned in planes intersecting each other at approximately 65/115° (center), and parallel reflective films that appeared to be incipient cleavage (right). Photos by Gagan Choudhary; image width 25 mm.

The carving was identified as amblygonite-montebrasite by Raman spectroscopy in the 200–2000 cm–1 region, which revealed distinct peaks at ~297, 425, 481, 600, 643, 797, 1011, 1058, 1107, and 1186 cm–1 (figure 3). Amblygonite and montebrasite are both lithium phosphates with a common chemical formula of (Li, Na)AlPO4(F, OH), forming an isomorphous series between F-rich amblygonite and OH-rich montebrasite. The two minerals can be colorless, yellow, or green. High-quality crystals are prized by collectors but rarely seen in the gem trade (R. Webster, Gems: Their Sources, Descriptions and Identification, 5th ed., rev. by P.G. Read, Butterworth-Heinemann, Oxford, UK). The amblygonite and montebrasite end members can be differentiated on the basis of peaks at ~600 and 1060 cm–1 and a peak at ~3370 cm–1. With an increasing percentage of fluorine, the 600 cm–1 peak shifts from 599 to 604 cm–1 while the 1060 cm–1 peak shifts from 1056 to 1066 cm–1 (B. Rondeau et al, “A Raman investigation of the amblygonite-montebrasite series,” The Canadian Mineralogist, Vol. 44, No. 5, pp. 1109–1117). According to the RRUFF database, however, the peak for montebrasite is at 1047 cm–1 while amblygonite’s is at 1060 cm–1. This is possibly due to different instrument settings. Although the ~3370 cm–1 peak was not studied here, the 600 and 1058 cm–1 peaks in this carving suggested that it belongs to an intermediate state in the amblygonite-montebrasite series. 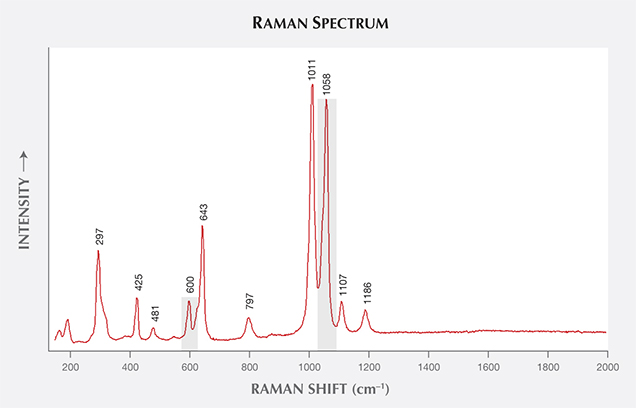 Amblygonite-montebrasite is known from many localities, especially the United States and Brazil, but the client did not know the source of the carving. A few faceted samples have been examined at this laboratory, but the carving documented here was exceptional for its large size and transparency, despite its brittleness and tendency to crack.

Gagan Choudhary (gagan@gjepcindia.com) is the deputy director at the Gem Testing Laboratory in Jaipur, India and a regular Gems & Gemology contributor.