The first standout piece Bindra showed us was an 8.56 ct unheated, intense pink sapphire of extremely high clarity from Madagascar. Under the lights of our photo studio, it showed an intense pink hue (figure 1). A gem of this quality might expect to realize a wholesale price in the region of $10,000 to $15,000 per carat. Bindra noted that Madagascar is producing some superb fancy sapphire, including pink, violet, and “padparadscha” colors.

B&B Fine Gems
In this interview, Dave Bindra of B&B Fine Gems showcases fine pink and yellow sapphire, Mozambique ruby, and a superb suite of Russian demantoid garnet. He explains how increased consumption in markets outside the U.S. and Europe is affecting gem supply and forcing many colored gem dealers to turn to the “recirculated” market for their clients.

Although this pink gem represented recent production, Bindra explained that the secondary market has become an extremely important source for many dealers now that competition for freshly mined goods is so intense, particularly from buyers serving Asian markets. These recirculated gems coming back onto the market offer a way for dealers to procure stones that often surpass current production in size and quality, or are simply unobtainable today. As an example, Bindra cited an 89.55 ct unheated golden sapphire from Sri Lanka (figure 2), remarking that he had not seen material of this color emerge from the ground in Sri Lanka for more than 10 years. Originally this gem was somewhat larger, over 100 ct. Modern cutting reduced the weight slightly but produced a dramatic improvement in color and brilliance. Bindra described this gem’s appearance and stature as “world class.” As such, it would likely command a wholesale price in excess of $3,000 per carat.

Bindra next showed us a blend of new production and recirculated stones: a graduated suite of 12 perfectly matched Russian demantoid garnet round brilliants. Each gem contained a classic “horsetail” inclusion. Weighing in at 20 carats total, the suite took Bindra four years to complete. He described it as a special item, with the stones from the secondary market selected and recut to perfectly match the newer gems. 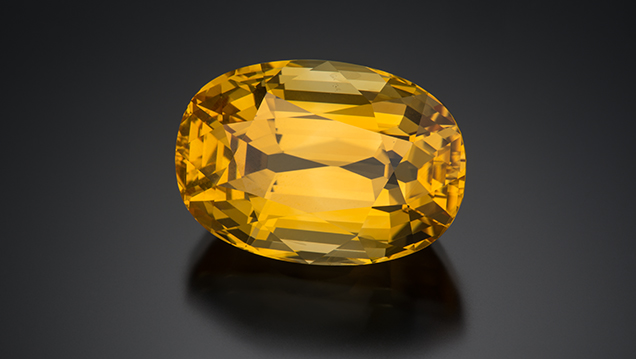 Figure 2. This exceptional unheated 89.55 ct golden sapphire from Sri Lanka is an example of a recirculated stone. Photo by Robert Weldon/GIA; courtesy of B&B Fine Gems.

For Bindra, Mozambique is the future of ruby production. He illustrated this with three fine heated gems from the Montepuez deposit weighing 7.05, 7.92, and 9.35 ct (figure 3). Although all three stones represented beautiful, clean material, he considered the 7.92 ct gem the finest, due to its superior brilliance and intense red hue. Due to the ongoing trade embargo with Myanmar, classic “Burmese” ruby is unobtainable for U.S. dealers. Fine Mozambique rubies like these in the 7–9 ct range are in high demand and exceptionally rare. Gems larger than 4 or 5 ct are increasingly hard to find, Bindra pointed out.

Unlike Myanmar, Mozambique does not carry the stigma of human rights abuses. The heat treatment of these rubies is not an issue with consumers, either. As Bindra explained, the market for top natural unheated ruby has now reached such rarified levels that buyers are very receptive to high-quality heated rubies. (The current auction record is held by an unheated 8.62 ct Graff ruby, of Burmese origin, which sold for $8,372,094—or $994,040 per carat—at a Sotheby’s Geneva auction in September 2014.) Purchasing such expensive stones is a stretch even for the top 1% of consumers. By contrast, stones like the three Bindra showed us wholesale in the region of $35,000 to $50,000 per carat. He said gems like these are “quite consumable” and can be the centerpieces of wearable jewelry, meaning they will occasionally be seen outside of safe deposit boxes.

Bindra faces the same issue as many other colored stone dealers in Tucson: scarcity of new rough production due to intense competition between the U.S. market and buyers purchasing for Chinese consumers. This is the major driver for dealers looking for alternative sources of gems such as recirculated goods, he said.

The new wealth in China has created a different dynamic. For more than 50 years, American and European consumers have been the main buyers of fine gemstones, he explained. Now these established markets have competition, and Bindra and many of his colleagues in the business supply gems to these competitors as well. Besides China, other cultures—India, for instance—have a rich jewelry heritage, and consuming gems is ingrained. This trend is not going to change, so there will be more wealthy consumers in emerging markets that desire colored gems, and current producers will struggle to meet demand.

In terms of demand at the show, Bindra reported that rubies and unheated sapphires were quite strong. There was demand for anything rare and exotic, goods that the average consumer would not find elsewhere. He also saw renewed demand for emerald. In the past, he noted a “certain favoritism” toward Colombian emerald, but increased supplies of quality gems from Zambia have made it a much more popular source and established the “Zambian brand” in people’s minds.