At the 2014 AGTA show, Fran Mastoloni (Mastoloni Pearls, New York City) provided a market summary from his own business perspective. He emphasized surging demand in the Chinese domestic market for all cultured pearl types, plus the need to introduce innovative styles and pearl combinations in contemporary jewelry. Since then, overall supply of fine cultured pearls of every type has become even more challenging.

This year, Mastoloni reported that Chinese demand for Philippine golden cultured pearls continues unabated, and the domestic market there is absorbing nearly all available production, effectively pricing them out of the North American market. Although never a high-turnover item in the U.S., any such pearls sold in the American market will likely come from suppliers’ existing inventory. And once sold, they will not be replaceable given current market prices. Mastoloni predicted an eventual downward correction, once the Asian market’s appetite for golden pearls is sated.

Supply of quality Tahitian cultured pearls (figure 1) is also becoming problematic. Mastoloni said the Tahitian government has ceased support of pearl farmers, with a resulting decline in colors, sizes, and overall product quality. Exceptional pearls are particularly scarce. He was very concerned about pearl production over the next 10 years. Prior to 2008, he said, Tahitian pearl farmers were very conscientious about quality. Today, in Mastoloni’s words, “Farmers are producing to turn over.”

Mastoloni noted that white South Sea cultured pearls remain the standard by which fine pearls are judged. Although fine quality is still difficult to find, supply is good. He showed us a spectacular Australian South Sea necklace composed of white to pink 15.5 to 19 mm-plus baroque pearls with excellent luster and unblemished surface (figure 2). Weighing in at an “extraordinary” 46.1 momme (172.88 grams), this necklace took more than two years to complete. There is always the temptation to keep improving a piece, to make it “bigger and better.” As an example, he showed us a large baroque specimen that measured 23.3 × 28.6 mm and weighed 4 momme (15 grams), with superb luster, that he would like to make the centerpiece of the necklace. Prices for baroque cultured pearls are stable with moderate demand, he noted, but sourcing high-quality goods is somewhat difficult. 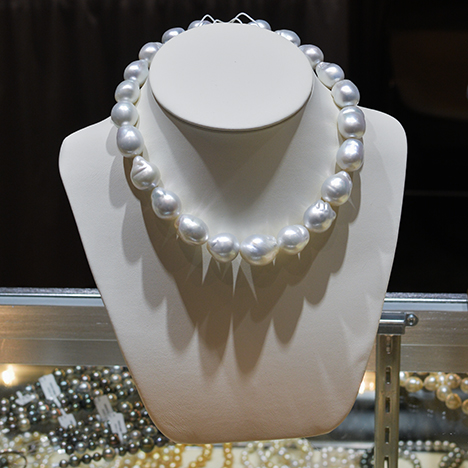 Mastoloni said fine akoya cultured pearls are also in high demand. Once again, he faces competition from Chinese buyers purchasing for their domestic market. According to Mastoloni, pearl farmers in China are no longer concentrating on smaller round pearls. They are not producing enough 5, 6, or 7 mm diameter goods in sufficient quality, in either akoya or freshwater types, to satisfy demand. The result is increased competition, with Chinese buyers competing at the source in Japan for akoya. This demand is driven by the emerging wealth of Chinese consumers. Their purchasing power and the sheer quantity of consumers in the Chinese domestic market is fueling unprecedented demand. They are looking for better quality, and fine Japanese akoya pearls meet that need.

Figure 3: Left: Long necklaces are in style. This “Wave” necklace features multicolored Tahitian cultured pearls ranging from 7 to over 14 mm. Right: This close-up of the necklace shows its repeating color and size patterns in a succession of “waves.” Photos by Duncan Pay/GIA; courtesy of Mastoloni Pearls

In terms of trends, Mastoloni noted that “long is in.” Double- and triple-length necklaces from 32 to more than 50 inches are very popular, he said. He has also noticed that basic necklaces are making a comeback, and more retailers are asking him to supply “regular” necklaces for their inventory. Mastoloni showed us a double-length necklace that made clever use of soft-colored round Tahitian cultured pearls in a variety of sizes. He called it the “Wave” necklace (figure 3). “Swells” graduating from 7 to over 14 mm form waves in repeating color patterns along the length of this necklace (approximately 36 inches), creating a layered look. The repeating size and color patterns lend a sense of movement and drama.