Lynch’s reputation for introducing new products and styles leads to the same question at his Tucson booth every year: “What’s new in the pearl business?” Typically the question centers on freshwater cultured pearls from China. This year, he noted, the emphasis of Chinese pearl culturing innovation was on size. As evidence, Lynch showed us a remarkable necklace composed of round freshwater cultured pearls graduating from 15.4 to 19.3 mm (figure 2). He had never seen a necklace of this size and quality, with beautifully matched, top-quality round pearls. His supplier only had four available, and this necklace was the finest. 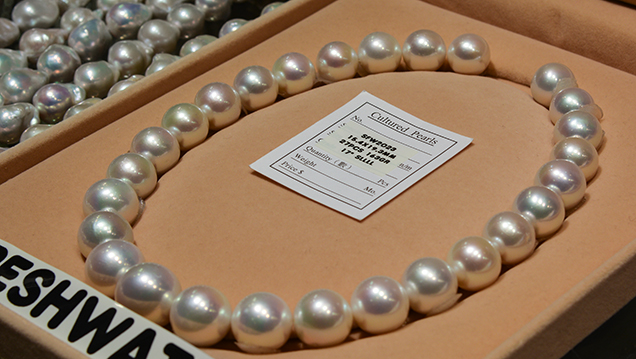 Figure 2. This spectacular strand of Chinese freshwater cultured pearls is graduated from 15.4 to 19.3 mm. Lynch described it as the best of four such strands available when he purchased it from his supplier. Photo by Duncan Pay/GIA; courtesy of Sea Hunt Pearls.

Rather than producing baroque pearls, like the soufflé, the drive is now toward bead nucleation and large, spherical pearls. As producers initially sell by weight, there is a financial imperative to produce bigger pearls.

Although producers are ultimately striving for quality, quantity is still the most important factor. Lynch felt that the goal of Chinese freshwater pearl culturing has always been the production of “large white round pearls” and that success to date has been limited, with extremely small volumes of fine-quality product available. Certainly, Lynch knows of no more than a handful of examples like the necklace he showed us at his AGTA booth.

Lynch was uncertain which kind of nuclei or culturing process is used for these larger spherical pearls, but he said the results speak for themselves. He believed it might be similar to the proprietary process used by Chinese producer Grace Pearl for its “Edison” pearls. In this method, genetically selected mussels are implanted using tiny beads instead of mollusk tissue. “Edison” is a backhanded tribute to American inventor Thomas Edison.

Lynch noted that producers are continually hybridizing the mussels used for cultivation, and that they remain very tight-lipped about their methods. Without drilling, sawing, or X-raying the pearls, it is difficult to fully understand the processes or growth methods used.

He mentioned that some of the top producers in China have become increasingly “bullish” about their products, comparing them very favorably with the best South Sea cultured pearls. Because the Chinese domestic market is so strong, its consumers are prepared to pay higher prices than consumers in countries like the U.S. The producers are, in effect, pricing their products out of these markets. According to Lynch, the message from these producers is that the traditional stature of their product vis-à-vis other pearl types must change. In the meantime, they will not consider lowering their prices to satisfy traditional export markets in the U.S. and Europe.

We noticed he had a comprehensive selection of baroque freshwater cultured pearls. Lynch said that while there is moderate market demand for baroque pearls, much of the production originates from cultivators striving for spherical pearls, because “that’s where the money is.” In his opinion, much of the current Chinese production is similar to “Kasumiga pearls” with textured skins that display very strong orient over natural colors (figure 3).

Known as “ripple” pearls for their textured surface, they are highly regarded for their prismatic effects, near-metallic luster, and organic shapes. As a strand wholesales for just a few hundred dollars, they present a “big look” for a modest outlay. For example, a very rough estimate on the 15.4–19.3 mm round necklace shown in figure 2 would be $10,000 per strand, whereas these baroque multicolor necklaces cost just a few hundred dollars per strand.

Lynch’s higher-quality baroque Chinese freshwater pearls are larger and have smoother skins (figure 4), so the price rises accordingly. The next examples he showed us cost two to three times more. According to Lynch, they are very fashion-forward and still represent a tremendous value for the size.

Figure 4. These slightly larger, higher-quality baroque cultured pearls have smoother skins than those in figure 3. As a consequence, they are priced two to three times higher. Natural-color goods are in the foreground, while the white pearls have been bleached for a more uniform appearance. Photo by Duncan Pay/GIA; courtesy of Sea Hunt Pearls.

The higher-quality baroque strands Lynch showed us were also bead nucleated, but the bead had been positioned more conventionally, in the gonad of the mollusk. This technique produces a different type of pearl, known in the trade as a “fireball” (D. Fiske and J. Shepherd, “Continuity and change in Chinese freshwater pearl culture,” Summer 2007 G&G, pp. 138–145, www.gia.edu/gems-gemology/summer-2007-continuity-change-chinese-freshwater-pearl-culture-fiske).

All the peach to pink colors in these strands are natural, Lynch told us. Bleaching produces the white product. Unlike the soufflé pearls, which are typically hollow after being drilled, these bead-nucleated pearls have impressive heft. They sell very well, according to Lynch, and no two necklaces are uite the same due to the uniqueness of every pearl. As an aside, he told us that the weight of the pearls he shipped to the show was around 489 pounds (about 221 kg), much of that consisting of bead-nucleated freshwater cultured pearls.

Next, he showed us some tissue-nucleated (non-beaded) round freshwater cultured pearls (figure 5). These 5–6 mm spherical pearls were impressively uniform with high luster and crisp reflections from smooth skins, making them an excellent substitute for an akoya strand. Finding this sort of quality is very difficult these days, Lynch told us. These also cost a few hundred dollars per strand.

Although Lynch carries a wide stock of Chinese freshwater pearls, most of his resources go into purchasing Tahitian, South Sea, and akoya cultured pearl products. All in all, he said, supply of every top-quality cultured pearl type is very limited, and competition for available product is very high. The increase in Chinese consumption has drastically affected supply for U.S. and European wholesalers. Fortunately, Lynch told us with a sense of relief, he has been a “pearl hoarder” for many years, so he has a significant inventory to draw upon. 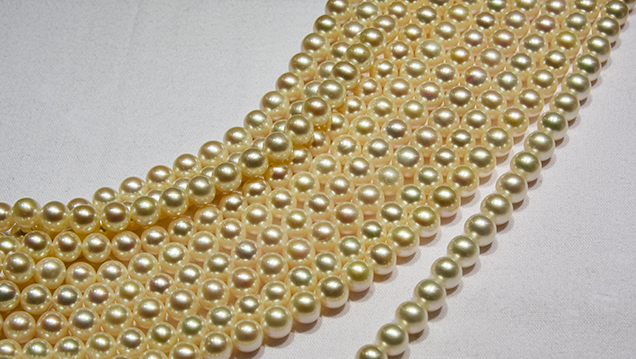 Lynch suggested that the Chinese domestic market does not know what the market value of many products might be elsewhere. The Chinese have a different mindset than consumers in the West, he told us, citing a fashion example: “You’ll pay more for couture items in Shanghai than in Paris… If it’s expensive, it’s better.” Although many commentators insist the Chinese economy is slowing down and no longer enjoying double-digit percentage growth, Lynch said that the emergence of a large middle class that wants all the trappings of wealth is driving up the market prices for gems and pearls. He noted that the Chinese like to display their wealth, and jewelry is an obvious way to do that.

Asked what was selling this year, Lynch explained how his business has changed. He used to sell more volume at the Tucson show, especially freshwater items wholesaling for $300 to $600 apiece. Today he handles fewer transactions, but the average transaction has increased dramatically. Lynch’s perception is that spending habits have changed as the middle class in the U.S. has shrunk. He finds fewer consumers looking for $1,000 items. Instead, he sees purchasers from a higher income bracket looking for a $20,000 or $30,000 piece. 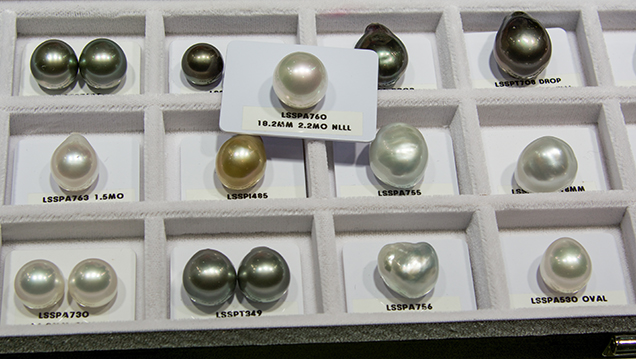 Lynch now sells far more round white South Sea and Tahitian goods, along with fine single pearls and pairs (figure 6). The first piece he showed us was a superb, exceptionally large round South Sea cultured pearl of 18.2 mm (figure 7). Lynch said he buys with designers in mind, as items like this are far more affordable than a strand and make excellent centerpieces for custom jewelry pieces. The price for such a piece would be approximately $6,000, whereas a necklace of this quality would cost many tens of thousands of dollars. 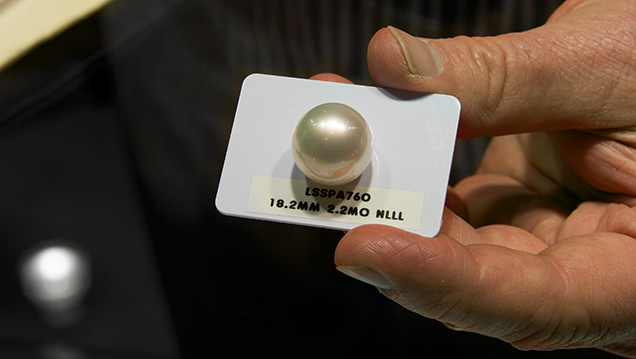 Finally, Lynch pulled out a uniquely shaped Tahitian baroque cultured pearl (figure 8). Its flattened shape would allow it to sit especially well as a pendant. At 19.7 mm, it was large. Even though the pearl was very baroque, its color was exceptional. This piece had the style and substance to really make a statement at a reasonable price (a couple of thousand dollars). 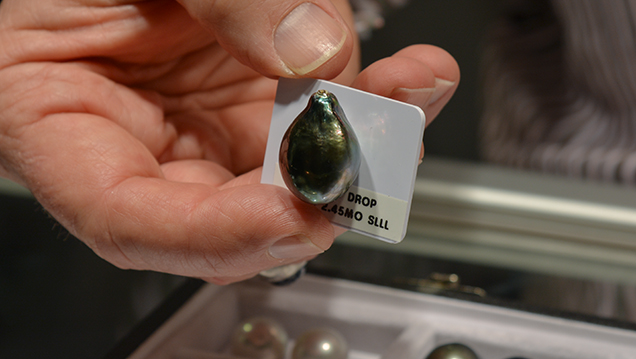 Figure 8. This 19.7 mm Tahitian Sea cultured pearl weighs 2.45 momme (9.19 grams). It would make a fine centerpiece for an item of custom jewelry. Photo by Duncan Pay/GIA; courtesy of Sea Hunt Pearls.
About the Author