15.53 ct Pearl Discovered in Edible Oyster from the Ostreidae Family 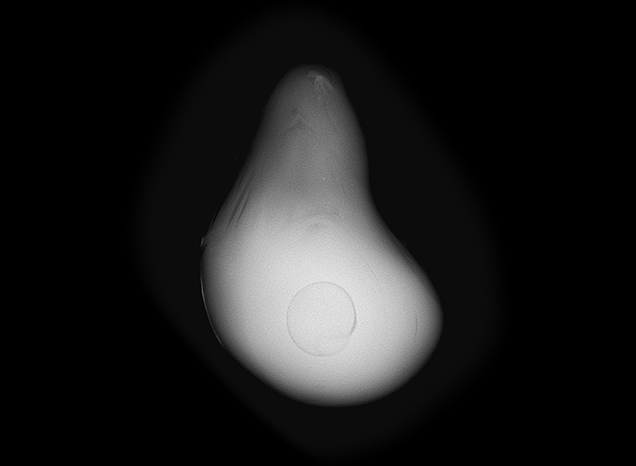 The client later informed the laboratory that the pearl had been found in an edible oyster while eating at a restaurant. Unfortunately, the host shell had not been retained and no photographs had been taken upon initial discovery. Despite this, the client later returned to the restaurant to obtain shells from the two types of oysters served on their menu, the Pacific oyster (Crassostrea gigas) and the Atlantic oyster (Crassostrea virginica). Gemologists were able to use these shells to gather additional gemological information and compare the results to the submitted pearl.

Figure 3. Left: A microscopic view of the shell revealed a directionless patchwork of cells with an unstructured opaque white patch. The cells exhibited a faint iridescent phenomenon when illuminated by a fiber-optic light in certain orientations; field of view 9.87 mm. Center: A nearly identical appearance can be seen on the surface of the pearl; field of view 7.19 mm. Right: A differing mosaic pattern of non-oriented cells displayed on the surface of a white scallop pearl. Each cell contains a fibrous structure, and reflected light produced a unique shimmering sheen or silky appearance; field of view 5.08 mm. Photomicrographs by Artitaya Homkrajae (left, center) and Britni LeCroy (right).

Raman spectroscopic analysis verified that the shells were composed of calcite, and visual inspection showed nondirectional patches of a broad, mottled cellular structure bearing a striking resemblance to the pearl. However, these qualities are also seen in some white scallop pearls, as it is possible for them to contain a patchwork of directionless cells. A strong contrast, though, was seen in the microscopic surface appearance. The cellular structure within the oyster shells exhibited a slight reflective colored sheen in certain orientations when illuminated by a fiber-optic light, creating a faint iridescent phenomenon. This characteristic was nearly identical to the surface appearance of the pearl under examination (figure 3, left and center). Conversely, the individual cells of scallop pearls had a fibrous structure, and light reflected from them produced a shimmering sheen or silky appearance. This appearance has been noted to be a unique feature of scallop pearls in the literature (K. Scarratt and H.A. Hänni, “Pearls from the lion’s paw scallop,” Journal of Gemmology, Vol. 29, No. 4, 2004, pp. 193–203), and an example is shown in figure 3 (right). Such features were not observed on the surface of the pearl under examination or the oyster shells.

The pearl and oyster shells also displayed translucency over most of their surfaces with randomly oriented opaque white patches. The cellular patchwork formation was faint or absent in these white patchy areas. This characteristic further supported their relationship (again, see figure 3, left and center).

With supporting surface evidence from the oyster shells and the previously examined LaPearlite cabochon samples, gemologists were able to conclude that the pearl originated from the Ostreidae family, an edible oyster rather than a species of scallop, or member of the Pectinidae family. A few oyster pearls have been previously recorded in the literature (C.P. Idyll, “The pearls of Margarita,” Americas, Vol. 19, No. 8, 1967, pp. 8–14; K. Scarratt et al., “A note on a pearl attached to the interior of Crassostrea virginica (Gmelin, 1791) (an edible oyster, common names, American or Eastern oyster),” Journal of Gemmology, Vol. 30, No. 1/2, 2006, pp. 43–50; Fall 2019 Gem News International, pp. 439–440). Yet this is the first examination by GIA gemologists of a pearl known to have been produced from the Ostreidae family (true oyster) mollusk, as well as the first GIA pearl identification report for one. Additionally, the significant size and weight of this 15.53 ct pearl are noteworthy. Although oyster pearls are not of prime importance within the global pearl market, they are rare, curious novelties that can offer insight to the scientific pearl community.

Cabochons Fashioned from the Shell of Crassostrea Virginica

Crassostrea virginica, the so-called Eastern or American oyster, is a commercial seafood widely distributed along the east coast of the United States to the Gulf of Mexico.

Pakistan, which has a coastline stretching 1,046 km (650 miles) along the Arabian Sea, the Indian Ocean, and the Gulf of Oman, is blessed with numerous marine resources, including oysters that mainly inhabit estuaries and mangrove habitats.