At the GIA Carlsbad laboratory, the authors recently examined a cabochon of “bloodshot” iolite (containing red, eye-visible platelets of hematite) intergrown with a sunstone (figure 1). This material was reportedly sourced from India. Cordierite (iolite) and plagioclase feldspar is a common metamorphic mineral assemblage, and similar material reportedly from India has been documented in the past (Winter 1991 Gem News, pp. 261–262).

This “double” gem specimen displays a mixture of an attractive bluish violet dichroic color with red hematite platelet inclusions in the iolite half, combined with an orange aventurescence effect from numerous tiny copper-colored hematite platelets in the sunstone half. 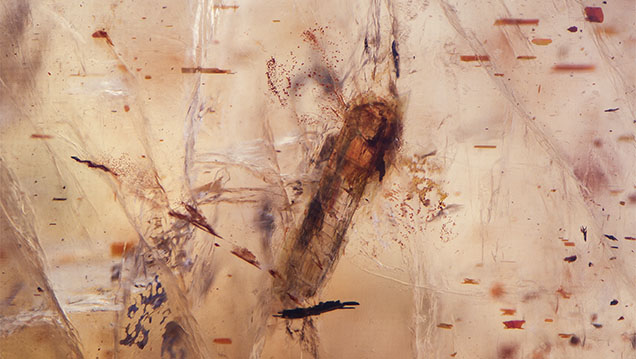 Viewing the stone under magnification offers an inclusion scene with a variety of well-formed hematite platelets, crystals, and liquid inclusions. Of particular interest was a fine elongated single-crystal inclusion of anthophyllite (figure 2).

Although amphibole mineral inclusions have been documented extensively, distinct prismatic anthophyllite crystal inclusions are very rare and few references are found in the literature. Anthophyllite is more common in lamellar or fibrous form, classified as asbestos.

Jonathan Muyal is a former staff gemologist, and Paul Mattlin is manager of distance education, at GIA in Carlsbad, California.