A Melee-Sized CVD Synthetic Diamond in Pearl and Diamond Jewelry

In March 2017, NGTC’s Beijing lab received 24 pieces of pearl and diamond jewelry (including the earrings seen in figure 1) from a domestic client, who claimed they were imported. Synthetic melee diamonds were identified in 14 of the 24 pieces. Most of the synthetic specimens were HPHT grown, but one was a melee-size CVD synthetic. The near-colorless CVD round brilliant circled in figure 2 was mounted in a pearl earring with about 200 natural melee diamonds. The estimated weight of this CVD melee is 0.01 ct. No obvious inclusions were found under 10× magnification. 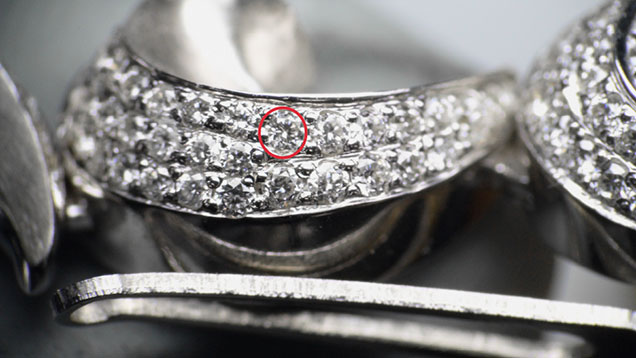 Figure 2. A CVD synthetic diamond (circled in red) was mounted in an earring along with very similar-looking natural melee diamonds. Photo by Shi Tang.

An absorption spectrum collected by micro-FTIR identified it as a type IIa synthetic diamond, with no N-related absorption. A weak 270 nm absorption band usually associated with synthetic origin was detected in the UV-Vis spectrum. With 532 nm laser excitation at liquid nitrogen temperature, the PL spectrum showed strong SiV– center double peaks at 736.6 and 736.9 nm (figure 4), indicating a CVD synthetic. A clear 978 nm emission also appeared in the PL spectrum with 785 nm laser excitation; the assignment of this emission is unknown. The green fluorescence was attributed to an H3 center, which means the specimen was HPHT-treated after growth.

This is the first time NGTC has identified a melee-size CVD synthetic diamond mounted alongside natural stones. This development is concerning, considering the challenge it would pose for gem laboratories. CVD synthetic screening requires more time and effort than HPHT synthetic screening, since the rapid methods of phosphorescence observation currently used would no longer be reliable. Therefore, new screening techniques and instruments are needed.

Figure 4. The melee-size CVD synthetic diamond shows strong SiV– center emissions at 737 nm in the PL spectrum, as collected with a 532 nm laser.
About the Authors

A round-cut specimen set in a ring is the first mounted CVD synthetic melee diamond identified by GIA.