A unique type of blue-green garnet has entered the market through New Era Gems (Grass Valley, California). The garnets reportedly come from a deposit near the border of Tanzania and Kenya. GIA’s Carlsbad laboratory obtained a small parcel of blue-green rough material and two faceted stones (figure 1, left) for examination. Unlike traditional blue-green garnets that exhibit a color change from purplish or orange red in incandescent light to bluish or yellowish green in daylight, these essentially remained blue in the lighting conditions we tested (CIE standard illuminants D65, A, F10, and F9, and a cool LED light with a 7500K color temperature). They showed only a weak color change from violet or blue in incandescent light (figure 1, right) to green or blue-green in daylight (again, see figure 1, left). We chose two samples from the New Era parcel, one with a classic violet to blue-green color change (garnet 1) and one piece of this new material with a weak color change from blue to blue-green (garnet 2). These were polished into wafers and analyzed to understand their chemical composition and color behavior.

Standard gemological testing revealed a refractive index of 1.760 to 1.765 and a hydrostatic specific gravity of 3.83 to 3.88. Fluorescence was inert to long- and short-wave UV light. No pleochroism was seen with the dichroscope. Using a handheld spectroscope, we observed absorption lines in the blue and violet section and a very broad absorption band centered around 590 nm wavelength. These properties are consistent with garnet.

Laser ablation–inductively coupled plasma–mass spectrometry (LA-ICP-MS) composition analyses were performed using a Thermo Fisher iCAP Q ICP-MS coupled with a New Wave Research UP-213 laser ablation unit. USGS reference glasses GSD-1G and GSE-1G were used as external standards and 29Si as the internal standard. The analyses were performed in the same region where the spectroscopic data was collected (table 1). The garnets were predominantly composed of equal amounts of pyrope and spessartine. The main difference was the higher concentration of V2O3 in garnet 2 (2.3 wt.%) than in garnet 1 (1.6 wt.%). Based on the classification system from Stockton and Manson (Winter 1985 G&G, pp. 205–218), the material represented by these two garnets is pyrope-spessartine. Vanadium and manganese are known to be the main cause of color change in pyrope-spessartine, yet garnet 2 contained a much higher vanadium component than any of the color-change pyrope-spessartine ranges (0.13–1.65 wt.% V2O3) reported by Schmetzer et al. (“Color-change garnets from Madagascar: Variation of chemical, spectroscopic and colorimetric properties,” Journal of Gemmology, Vol. 31, No. 5–8, 2009, pp. 258–259). To the authors’ knowledge, gem-quality garnet with this chemical composition has never been reported.

UV-Vis-NIR spectra were collected with a Hitachi U-2910 spectrometer with a 1 nm spectral resolution at a scan speed of 400 nm/min. The spectra were reflection-corrected using a method previously described by the authors (“Vanadium- and chromium-bearing pink pyrope garnet: Characterization and quantitative colorimetric analysis,” Winter 2015 G&G, pp. 348–369). The reflection-loss-corrected visible spectra were used to quantitatively calculate the material’s color at a wide range of path lengths and under different lighting conditions. Calculated color panels of the two garnets under incandescent light (CIE A illumination) and daylight-equivalent lighting (CIE D65 illumination) are shown in figure 2. The two garnets were also photographed under incandescent light (equivalent to CIE A) and fluorescent light (equivalent to CIE D65) for comparison. The close match between our photos and the calculated color panels confirmed the accuracy of our calculation. Figure 3 shows the possible color exhibited by two representative garnets with different path lengths (defined by the stone’s thickness) and the approximate corresponding carat weight of a well-proportioned round brilliant; for details of this calculation, see Sun et al. (2015). The high-vanadium garnet is bluer in incandescent light than the lower-vanadium garnet. Both become very dark at about 0.7 ct, which means the optimal color occurs in smaller sizes. 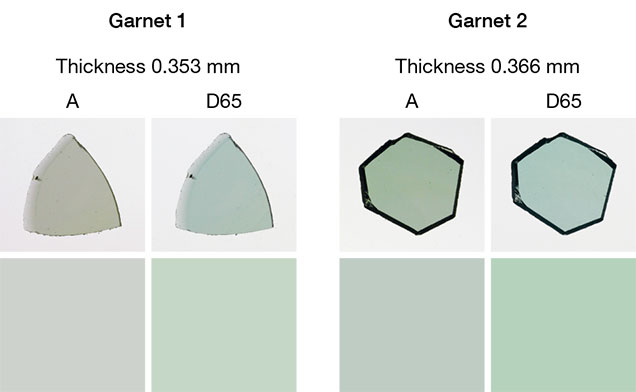 Figure 3. The color panels of two garnets under CIE A and CIE D65 illumination are quantitatively reproduced. The garnets’ colors are shown at different path lengths of light (defined by the thickness of the wafer) and carat weights. For each sample, the top and bottom rows represent the color under incandescent light (A) and daylight-equivalent light (D65), respectively.

To understand why the garnets stayed essentially blue in the lighting conditions tested, we can examine the visible absorption spectra. The calculated reflection-loss-corrected absorption spectra of garnets 1 and 2 at 5 mm path length are shown in figure 4. V3+ produces the large absorption band centered at about 585 nm. This band strongly absorbs orange and yellow light and a smaller portion of the red part of the visible spectrum. At low concentrations of vanadium, this absorption band produces two transmission windows, one in the blue part of the spectrum (figure 4, window A) and one in the red (figure 4, window B). This is the cause of the color change in low-vanadium pyrope-spessartine, as incandescent illumination highlights the red transmission window and daylight illumination highlights the blue-green window. As the concentration of vanadium increases, the red transmission window is preferentially closed and the color in both incandescent and daylight illumination is determined solely by the blue-green transmission window A. The concentration of V3+ relative to other chromophores (Mn2+, Fe2+, and Cr3+) is the fundamental reason why these higher-vanadium pyrope-spessartines remain blue under any lighting condition. 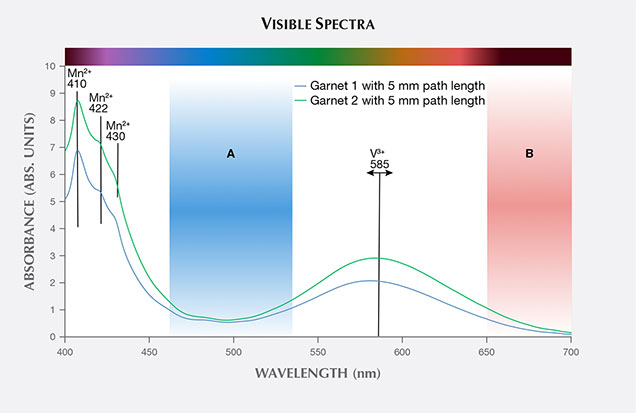 Ziyin Sun is a staff gemologist, Nathan D. Renfro is analytical manager of the gem identification department and microscopist of the inclusion research department, and Aaron C. Palke is a senior research scientist at GIA in Carlsbad, California.

Eight garnet species are defined and methods of identification are described.