Scientists still have not adequately surveyed Mexico from a mineralogical or gemological point of view. But recent finds of amazonite, jadeite, topazolite, demantoid, and labradorite demonstrate the importance of systematic research of the Mexican subsoil, which may lead to the discovery of other gemstones and gem localities (M. Ostrooumov, “Gemstones from Mexico—A review,” Summer 2011 G&G, p. 141).

Recently, the author discovered transparent blue crystals with hexagonal-prismatic habit in a granitic pluton in the hills of Guadalcázar municipality, San Luis Potosí State, in north-central Mexico. These crystals, the largest of which measured 12.04 × 5.68 × 4.57 mm, were embedded in a single quartz vein in association with muscovite (figure 1). All observed aquamarine crystals were generally characterized by a lighter blue tone, lacking visible inclusions. The samples were submitted for identification at the Institute of Earth Sciences at the University of Michoacan in Morelia, Mexico.

Infrared reflection spectroscopy and Raman microprobe are methods of “fingerprinting,” and a combination of these techniques permits the user to identify a wide range of mineralogical, gemological, and archaeological objects (M. Ostrooumov, “Infrared reflection spectrometry analysis as a non-destructive method of characterizing minerals and stone materials in geoarchaeological and archaeo­metric applications,” Geoarchaeology, Vol. 24, No. 5, 2009, pp. 619−637). 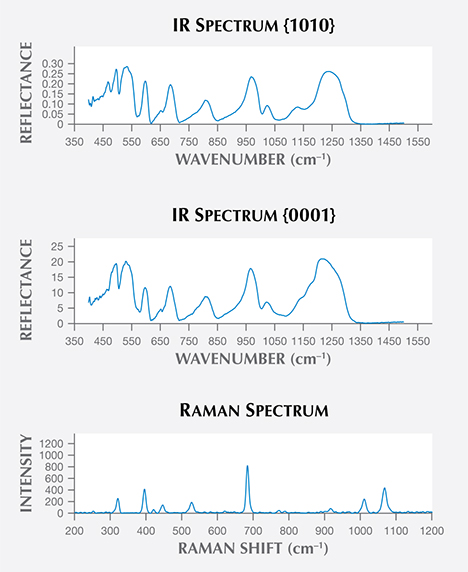 This study confirmed that the crystals belonged to the beryl group (http://rruff.info). The infrared reflection spectra were obtained on oriented crystal faces {0001} and {1010} in order to take into account the effect of orientation (figure 2, top and middle). These results indicate the presence of the typical Be-O band vibrations at 743–807 cm–1 and 1215–1276 cm–1. The infrared absorption spectra showed the presence of hydroxyl groups with a prominent band at 3450 cm−1 and a secondary band at about 3558 cm−1 due to the fundamental OH stretching vibration of water molecules, as well as the water-bending vibration at approximately 1630 cm−1. The Raman microprobe spectra (figure 2, bottom) showed excellent agreement with a reference spectrum for aquamarine from Ilmen, Russia, in the author’s FT-Raman database (http://www.mineralog.net). The Raman spectra of aquamarine in the water range from 3700 to 3500 cm−1 using 532 nm excitation wavelength showed two Raman bands at 3608 and 3598 cm−1 with different intensities. Water molecules in the channels are classified as type I or type II according to their orientation to the beryl structure. The Raman band at 3608 cm−1 is assigned to the vibration of type I water, and the Raman band at 3598 cm−1 is ascribed to the vibration of type II water molecules. UV-Vis-NIR, infrared reflection, and Raman microprobe techniques, as well as standard gemological testing, confirmed the discovery of aquamarine in the Guadalcázar granitoid deposits of San Luis Potosí State.

The recent discovery of in situ aquamarine in Mexico has renewed interest in the geology and mineralogy of gem deposits in that country. More discoveries are anticipated with further exploration in the region.

Mikhail Ostrooumov (ostroum@umich.mx) is a professor at the University of Michoacan’s Institute of Earth Sciences (INICIT) in Morelia, Mexico.