Four golden oval cabochons (figure 1) were submitted to the Carlsbad laboratory by L. Allen Brown (All That Glitters, Methuen, Massachusetts) for scientific examination. Standard gemological testing revealed that the stones were beryl. Under incandescent fiber-optic illumination, the stones showed a very sharp cat’s eye, caused by growth tubes and fine needle-like inclusions oriented parallel to the c-axis. Under magnification, blue crystals with octahedral morphology (figure 2) were the most distinctive internal characteristic. 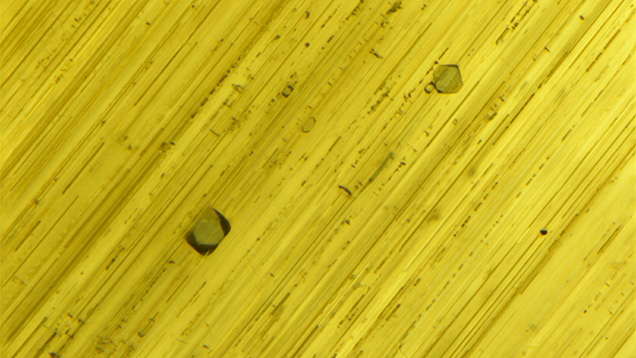 Figure 2. Diffused fiber-optic illumination reveals well-formed blue octahedral crystals in addition to the hollow tubes that cause the chatoyancy. The black needle-like inclusions may be hematite. Photomicrograph by Nathan Renfro; field of view 1.10 mm.

Raman microspectroscopy was used to identify the blue octahedral inclusions as gahnite, a zinc-rich end member of the spinel group with the general formula ZnAl2O4. It occurs most commonly as an accessory mineral in granitic pegmatites, usually associated with almandine-spessartine garnet, muscovite, beryl, tourmaline, and nigerite (D.R. Soares, et al., “Chemical composition of gahnite and degree of pegmatitic fractionation in the Borborema Pegmatitic Province, northeastern Brazil,” Anais da Academia Brasileira de Ciências, 2007, Vol. 79, No. 3, pp. 395–404). According to Brown, the stones were purchased in Tucson in 2010 and were represented as being from Brazil. These are the first beryls with gahnite inclusions that GIA has examined to date. Since gahnite is a diagnostic inclusion in sapphires from Sri Lanka (E.J. Gübelin and J.I. Koivula, Photoatlas of Inclusions in Gemstones, Vol. 3, Opinio Verlag, Basel, Switzerland, 2008, p. 290), detailed study of gahnite may also provide some indication of the geographic origin of heliodor.

Ziyin Sun and Jonathan Muyal are gemologists, Nathan Renfro is the analytical manager of the gem identification department and analytical microscopist in the inclusion research department, and Adam Steenbock is an identification technician at GIA in Carlsbad, California.