Star emeralds are rare specimens, and most are found in either Brazil or Madagascar. In 1999, Manuel Marcial de Gomar (Key West, Florida) purchased a 1,000-carat parcel of rough emeralds from Diallo Mahmoud, an independent emerald dealer based in Africa. Mahmoud noted that the parcel came from Madagascar. Marcial de Gomar later noticed that some crystals showed indications of chatoyancy. He chose this particular piece thinking it could be cut to produce a cat’s-eye emerald. Miami-based cutter Jone Ribeiro cut the stone into a 25.86 ct double cabochon (figure 1). Marcial de Gomar put the stone into his personal collection, where it stayed for 13 years, until independent gemologist and appraiser Martin Fuller examined Marcial de Gomar’s collection in 2013. Both experts recognized that this emerald was a star and not a cat’s eye. It was subsequently sent to GIA’s Carlsbad laboratory for an identification report. 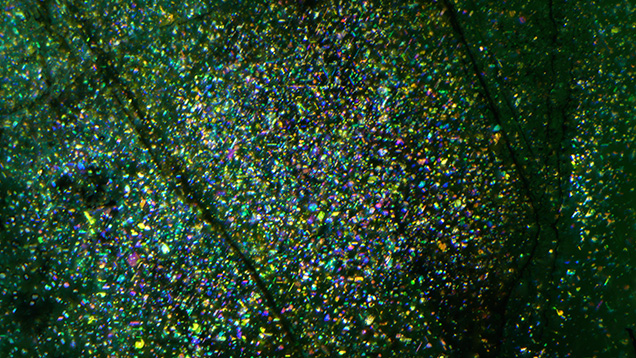 Figure 2. Minute fluid inclusions oriented parallel to the basal plane of the crystal are the cause of this emerald’s asterism. The inclusions exhibit thin-film interference, causing rainbow colors that are visible at high magnification. Photo by Nathan Renfro; field of view 1.8 mm. Courtesy of Manuel Marcial de Gomar.

Carl Chilstrom is a research librarian and historical archivist at GIA in Carlsbad, California.