Aquamarine and bloodstone, March’s two birthstones, are very different when it comes to appearance, but they share a similar reputation for protecting one’s well-being. The aquamarine birthstone evokes the colors of the sea. From deep green-blue to light, slightly greenish blue hues, faceted aquamarines are often free from inclusions and as clear as water, symbolizing purity of spirit and soul. The bloodstone birthstone is typically a dark-green cabochon that contains red spots of iron oxide, the “blood” that brings health and strength to the wearer. Read on to learn more about these two March birthstones – what they mean and where they can be found.

Aquamarine is not only the birthstone for March, but the gem is also given as a present on the 19th wedding anniversary. As for famous ones, in 1936 the government of Brazil gave First Lady Eleanor Roosevelt a dark blue rectangular step cut aquamarine that weighed 1,298 carats (ct). It was the larger of two stones faceted from a piece of aquamarine rough that itself weighed an impressive 2.9 pounds (1.3 kilograms). It is now housed at the Franklin D. Roosevelt Presidential Library and Museum in Hyde Park, New York. A celebrated attraction at the Smithsonian Institution is the 10,363 ct (about 4.6 pounds) Dom Pedro Aquamarine – believed to be the largest faceted aquamarine in the world. The approximately 14 inch (36 centimeter) high obelisk was fashioned by acclaimed German lapidary Berndt Munsteiner using the fantasy cut technique.

The Brazilian state of Minas Gerais has been an important source of aquamarine for the past two centuries. Travel there and you’ll find a changing panorama of landscapes: rocky hills, rivers and scrub brush dominate the central and eastern regions; savannahs, forests and streams checker the west; and lush green hills roll southward. Aquamarines are found in primary (hard rock) and secondary (weathered) pegmatite deposits in the eastern portion of the state, near the gem center of Teófilo Otoni.

Aquamarine is also found high in the Karakorum foothills of Pakistan. To reach the deposits, miners must climb steep paths to elevations of 9,800 to 13,000+ feet (3,000 to more than 4,000 meters) and work the sides of forbidding cliffs. Below this inhospitable rocky world lie fertile valleys, rushing rivers and small towns. Aquamarine from this area has been described as “water clear.” 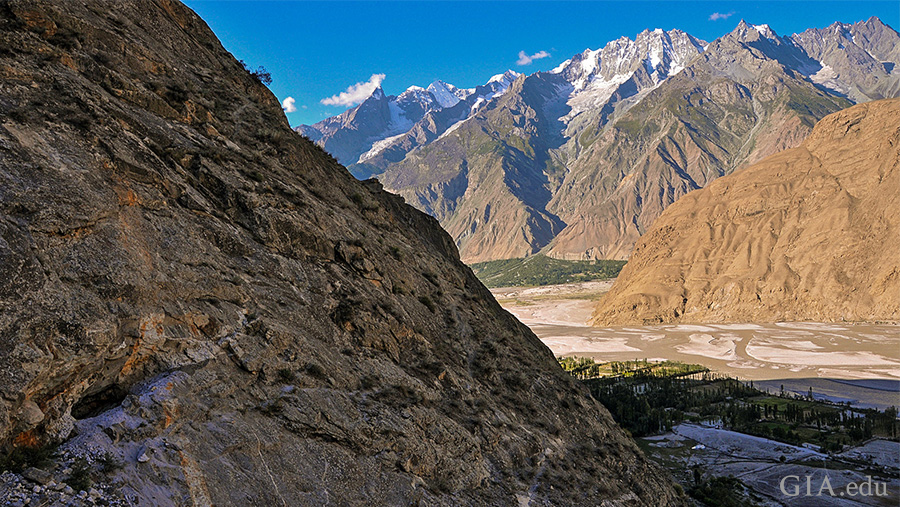 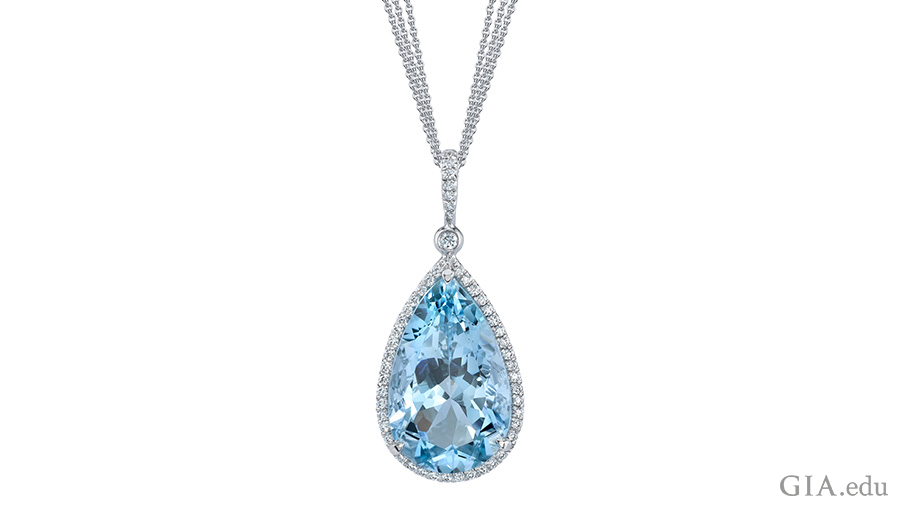 This 10.06 ct pear shaped aquamarine is surrounded by 72 round diamonds (0.35 carats) that are set in platinum. Courtesy: Omi Privé
More about Aquamarine Aquamarine Buyer's Guide

Bloodstone, also known as heliotrope, is a variety of chalcedony (cryptocrystalline quartz) that is traditionally semi-translucent to opaque dark green jasper with red inclusions of iron oxides, especially hematite. Bloodstone’s alternate name heliotrope comes from the ancient Greek word that means “to turn the sun.” In ancient times, these March birthstones were believed to turn the sun red if they were placed in water. The name bloodstone derives from the belief by some that the color pattern has religious significance, representing the blood of Christ.

Several metaphysical properties have been attributed to this March birthstone. They  include increasing strength, giving invisibility, and preserving health and youth. In modern times, many believe the bloodstone birthstone to be a lucky charm, as it is prized by athletes and others who want to grow their strength. Even today in India, fine bloodstones may be crushed into a powder and used as an aphrodisiac.

Most bloodstone in the marketplace today is from India. However, the bloodstone birthstone also comes from parts of Brazil, Australia, China and the United States, among other countries. Bloodstone can be found filling filling fractures or cavities in other rocks or as pebbles in riverbeds. 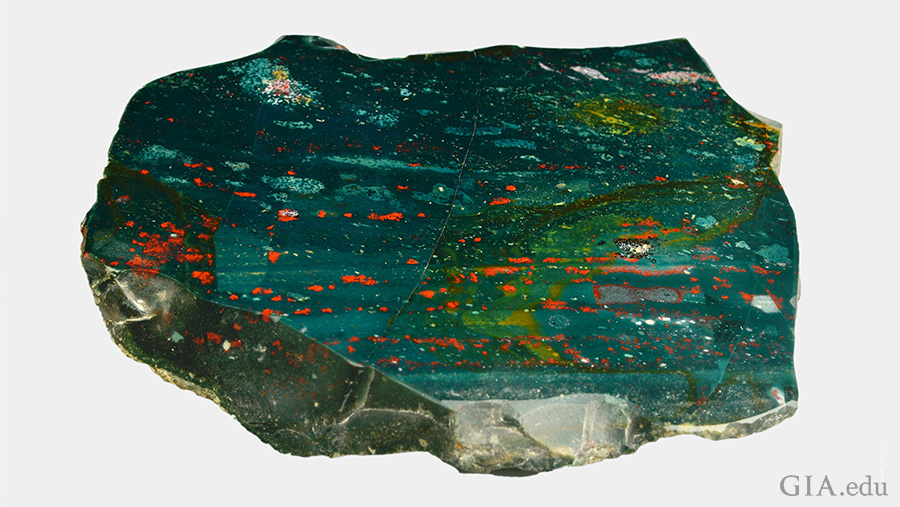 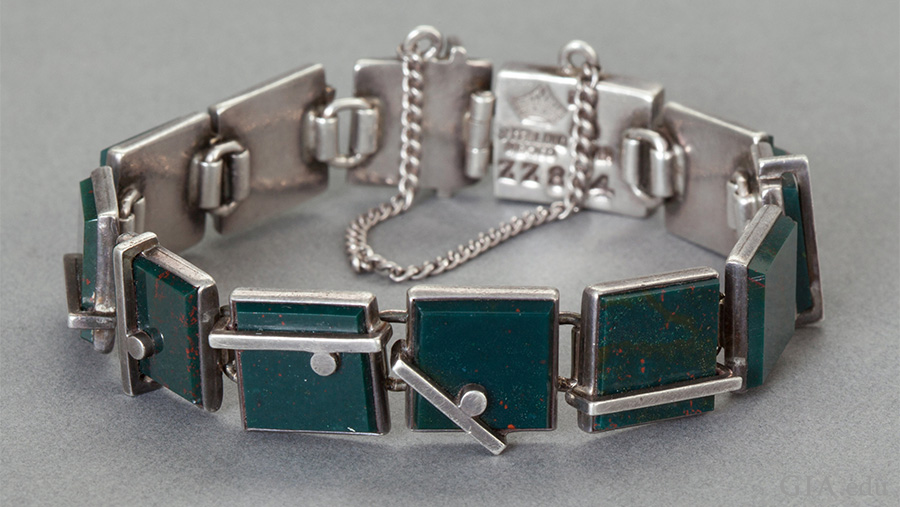 A rare Antonio Pineda Mexican silver and bloodstone bracelet from Taxco, Mexico, circa 1953. The bracelet has bezel set bloodstones, bar and ball overlay links and is secured with box clasp and chain. Courtesy: Heritage Auctions

Born in March? Pisces and Aries are your zodiac signs. Jewelry designers have fashioned some creative pieces, and we’ve found ones for you to enjoy. The March birthstones aquamarine and bloodstone have it all: They are beautiful, rich in lore and exceptionally wearable. Now you know how to pick one that will become a cherished addition to your jewelry wardrobe.