Amateur prospecting and mining by non-professionals, primarily for enjoyment, is known as fossicking. The target material can be anything, but precious metals and minerals are the most popular. Fossicking originated in the early 1850s during the Australian gold rush in New South Wales and Victoria. The term fossicking is said to come from the Cornish language and is widely used in Australia, New Zealand, and on nearby islands. 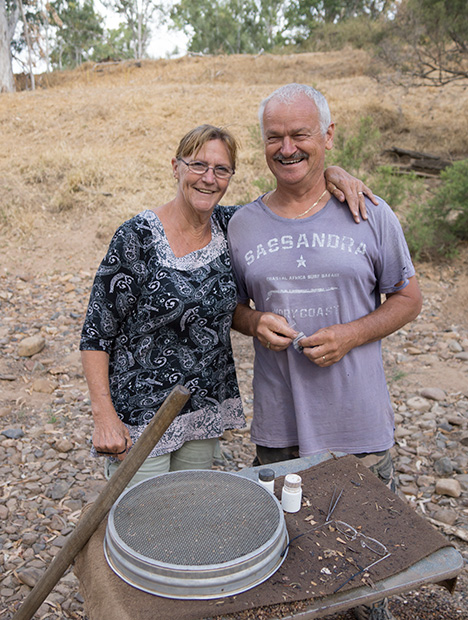 Many fossickers are like this couple. Ray Scott and his wife often visit the sapphire fields
in central Queensland, Australia. They enjoy the relaxed lifestyle and the gemstones they
discover. Photo by Vincent Pardieu/GIA.

In the early days, when large-scale mechanised mining was not as popular and living conditions not as good, there was not much difference between fossicking and mining. The introduction of modern technology freed many people from labour-intensive jobs, and their new jobs offered more discretionary income. Travelling for pleasure became possible. Fossicking is a unique recreational activity loved by travellers in countries rich in natural resources, such as Australia, and it inspires visitors from outside Australia as well.

WHERE AND HOW TO FOSSICK

Fossicking is a very promising activity: an opportunity to have quality family time and possibly recover some treasure. All states except New South Wales require fossickers to buy a licence before working in the field. At almost every mining site we visited in Australia, we encountered fossickers who really enjoyed their treasure-hunting trips in the outback. Many of them come back to the same place year after year to try out their luck. Fossickers can purchase licences either in local visitor centres or online. The cost is around Aus$10–20 (£5-10) for a year, for either an individual or a family.

Each state’s Mineral Resources Development Act declares certain areas official fossicking areas; therefore no prospecting and mining licences are issued there for businesses or corporations. The authors were amazed by the harmony between the miners and fossickers in areas where the fossicking zones are right next to mining claims. To help people locate their targets, many private and government websites provide maps and detailed guidance. Local mineral and gem clubs also host events as a platform for fossickers to communicate and possibly exchange items. When exceptional stones are recovered and word gets out, this can drive more people to dig in certain locations. 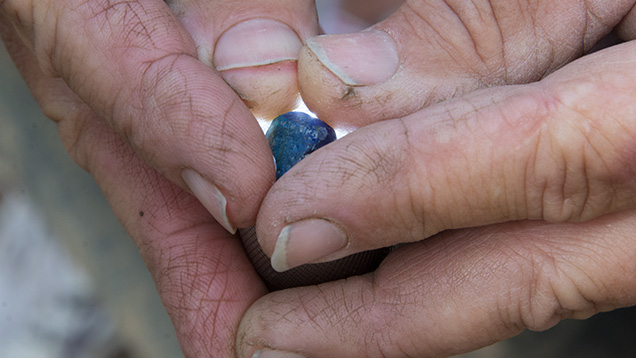 Ray Scott shows a rough sapphire with decent size and colour that he recovered a few days before. Fossickers rarely find stones like this. Photo by Andrew Lucas/GIA.

In north-east Tasmania, GIA field gemmologists led by Vincent Pardieu regularly practice sapphire fossicking in rivers near Weldborough with the help of Chris Hood, a local jeweller addicted to fossicking. This activity is a great way to check their understanding of alluvial sapphire deposits hands-on, and they have added the samples they mined to the GIA reference collection. The Weld River area has extensive alluvial deposits of corundum, topaz, chrysoberyl, zircon and more. These deposits were intensively worked for tin until the 1890s. The Weld River is just one of ten officially designated fossicking areas on the island of Tasmania.

A group of GIA field gemmologists had a great opportunity to practice their fossicking skills and collect reference sapphire samples for the collection.

Although some may think that fossicking is done only by hand, practical tools can be easily purchased or made to facilitate the work. In Australia these tools are allowed as long as there is no engine. Since most deposits dug by fossickers are secondary, a handy washing tool known as a “Willoughby” and a sifting-and-sorting table are some of the must-haves. The Willoughby, quite common in Australia, has the potential to be very helpful for artisanal miners in Africa. The tool’s design saves water and is very easy to manoeuvre. One man can easily transport and operate it. Compared to the simple tools used in Africa, the Willoughby is much more efficient. 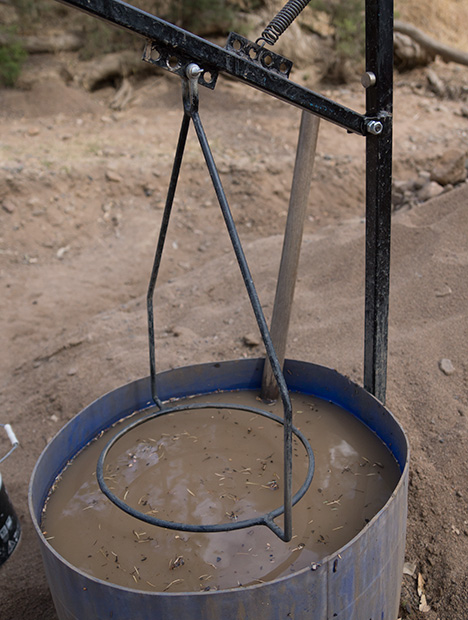 The Willoughby is a very practical washing tool for fossickers in Australia, which also
saves water. A spring connects the handle to the vertical stand. The pan containing the
sifted material is placed on the round metal support. Fossickers just need to shake the
handle to wash the material. The water in the container can be reused in the field. Photo by
Vincent Pardieu/GIA.

Following maps is a good way to get started finding the gem-bearing gravels, but conversations with the locals and fossickers with more experience in certain areas are always helpful. Before getting started, reading some basics about gemstones can help a fossicker identify the stones and avoid missing important discoveries. 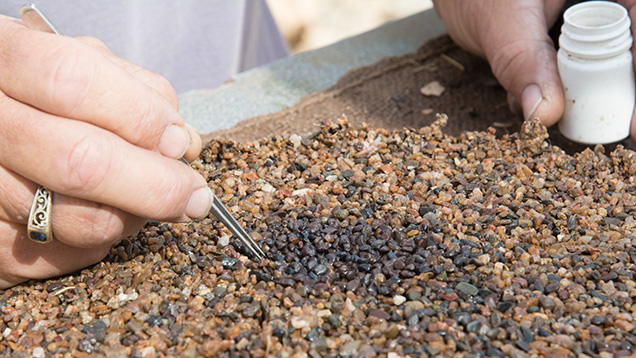 After washing in the Willoughby, a circular concentration of heavy minerals can be clearly seen. This is where the fossicker focuses in looking for gems. Photo by Andrew Lucas/GIA.

It is also important for potential fossickers to know relevant laws and regulations before taking any trips. The rules may vary by state. It may be challenging to obtain permits from a landowner in an area not designated for fossicking. The ownership of the gems found can also be a sensitive topic; therefore it should be dealt with beforehand. There is also a limit to the amount of material that fossickers can take home. Violating the rules can result in a fine. 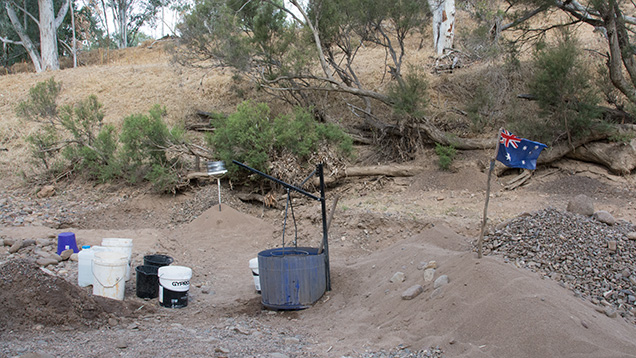 The setup of a fossicking site is very simple. The government and fossickers try to disturb the land as little as possible, so the small pit will be refilled after fossicking has finished. Photo by Andrew Lucas/GIA.

Gemstones like opal and sapphire can be pillars of the local economies of many outback mining towns, and fossicking tourism has an equally important role. In the towns of Inverell in New South Wales and Rubyvale in central Queensland, we witnessed how sapphire fossicking stimulates the economy. Hotels, restaurants, caravan parks and even jewellery shops are some of the most prosperous businesses in these towns. Fossicking maps are provided free of charge at local accommodation providers, and tours can be easily arranged. Fossicking is easy and convenient even for those tourists who do not originally plan to do any. 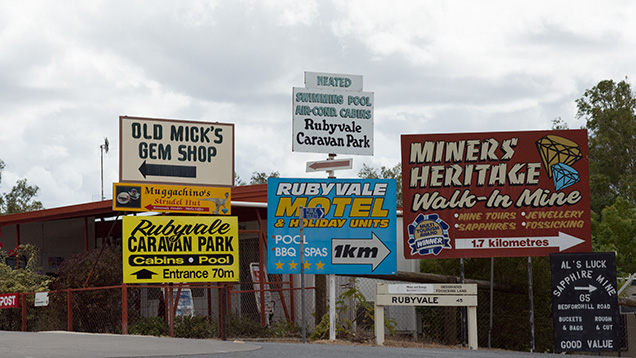 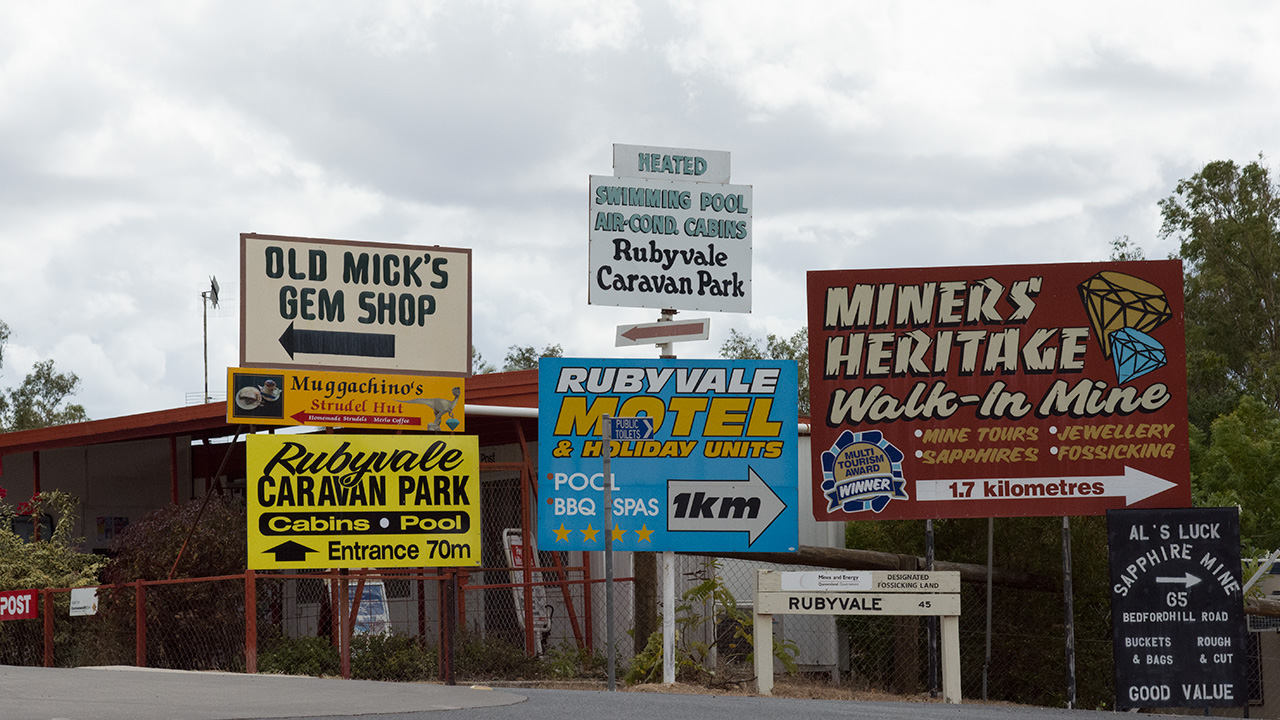 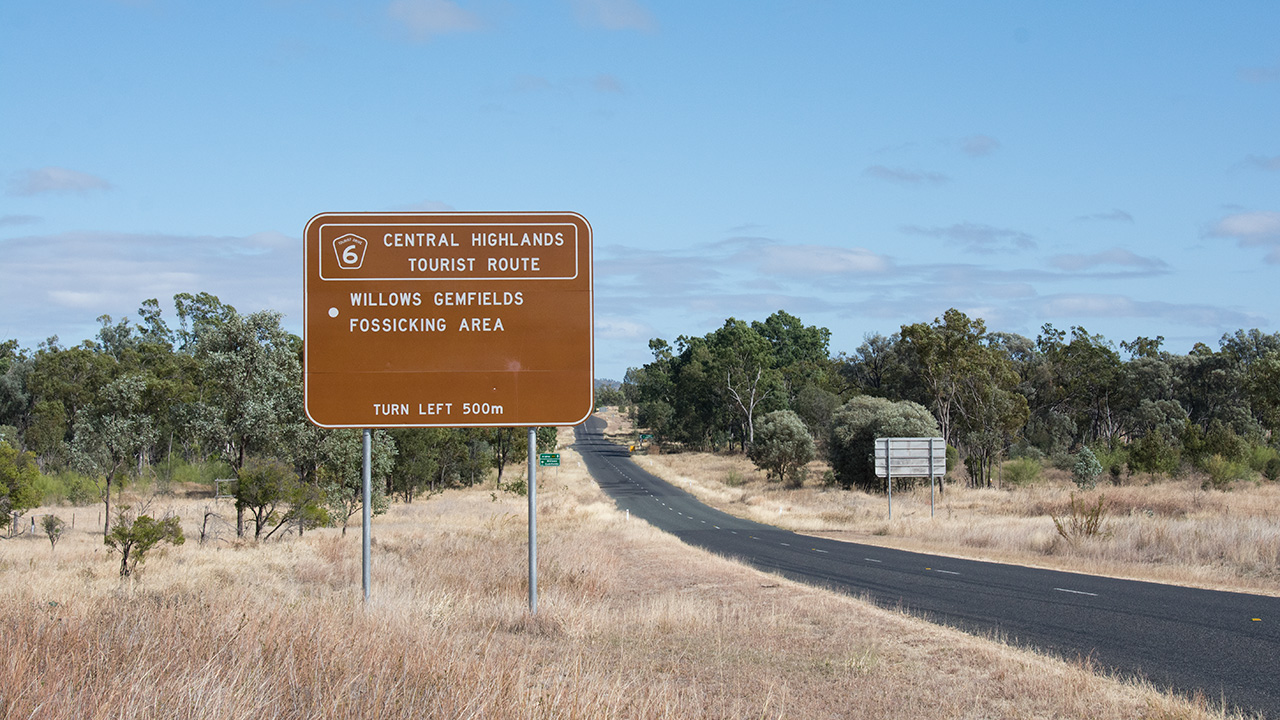 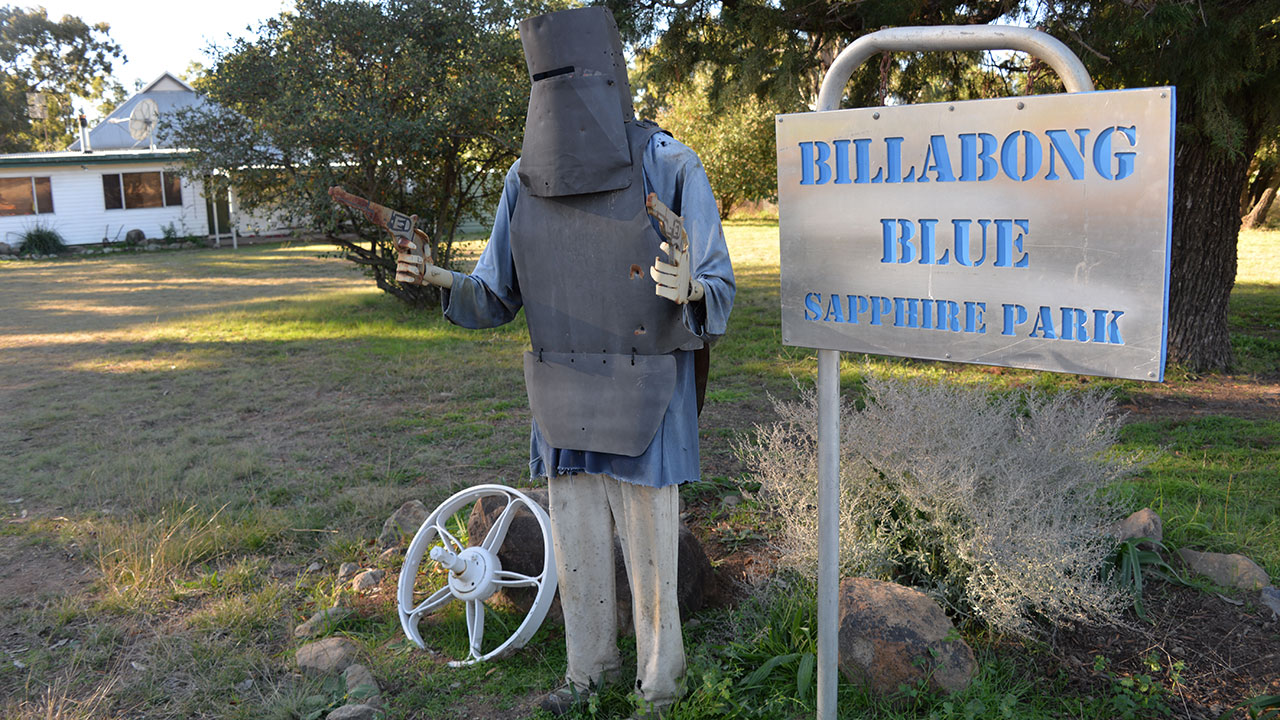 Fossicking All Over Australia

In Australia many tourists travel in caravans, synonymous with the recreational trailers in the United States. In these mining towns there are usually multiple caravan parks, with some near fossicking areas for easy access. Local jewellery businesses also rely heavily on tourists, including fossickers.

GIA staff often visit mines, manufacturers, retailers and others in the gem and jewellery industry for research purposes and to gain insight into the marketplace. GIA appreciates the access and information provided during these visits. These visits and any resulting articles or publications should not be taken or used as an endorsement.

The authors would like to thank Mr Terry Coldham for the opportunity to visit some of the most important mining areas on Australia’s east coast.

Australia is the most famous source of opals in the world. The black opals from Lightning Ridge are the most valuable opals ever produced. Journey with us on this expedition to the Australian outback to see how these rugged individuals mine opals and why they chase the rainbow of colour.

Seeking the Legacy of Australian Sapphire

Australia has been a prolific supplier of blue sapphire and has made enormous contributions to the global sapphire industry that still shape it today.

Splendour in the Outback: A Visit to Australia’s Opal Fields (in English)

Lightning Ridge is the world capital of fine black opals, the most desired of all opals. In June 2015 a group of GIA field gemmologists visited this legendary town in New South Wales, Australia. Come with us to explore this important source of fine opals.