Distinctiveness reigned over bling at the Baselworld show in Switzerland. Traffic was down and business spotty at the 16-23 March show, although a number of exhibitors said that demand had improved from last year.

Smart sellers adapted to the changed market, offering the rare, unusual and distinctively designed in place of (or in addition to) high carat weights for their own sake.

Exhibitors noted that buyers were looking for jewellery, not investments which require buyers to pay for gemstones with devalued currency, making a profitable resale very difficult. In previous years at the show, sellers of large diamonds had estimated that at least one-third of all diamonds larger than 5 carats were bought for investment, not jewellery.

Indeed, for years, sellers of large, high-quality diamonds and coloured gemstones at the Baselworld fair could count on brisk demand from a diverse group of private clients, largely from Russia, China and the Middle East.

Demand for such stones has slowed considerably for the past two years at the show, however, because of a confluence of events: a concerted crackdown on large cash transactions; a rising U.S. dollar that raises the costs of these goods by 10% to 40% in other currencies; economic slowdown in China and other previously fast-rising economies; and depressed prices for oil and other commodities.

Colourless diamonds larger than 5 carats were a difficult sell at the show. As one dealer of major stones put it: “Very few buyers from Russia and the Middle East were here − they used to account for a lot of the high-ticket demand.”

The dealer did say that prices for top stones have not softened as they had for more commercial diamonds because most dealers have the financial capacity to hold on to them until demand improves. Additionally, unlike the commercial diamond market, buyers of large diamonds rarely try to save money by trading down on quality.

“They either want the best, or will not buy,” he said.

Demand for commercial-sized diamonds did pick up at the show and the market in general. One reason is that prices have fallen to levels where, as one exhibitor put it, “manufacturers and their clients now want to do business.”

He added that the “green shoots of recovery” are buoying the diamond market, but it remains fragile. “We have to worry about whether the mining companies will raise prices again, whether China’s economy has truly hit the floor, whether the problems in major European banks will bring another downturn, and whether terrorism and refugees will disrupt the world economy. It’s a lot to worry about, but we must stay optimistic.” The 22 March terror attacks in Brussels, about 350 miles north of Basel, prompted city police and fair management to conduct random searches of attendees’ briefcases and bags and limit access to the show to the front entrances.

One dealer was showing a Namibian demantoid garnet necklace with 28 round cuts totalling 128 carats (cts.). The dealer said it took eight years to assemble, particularly because the colour of each stone was apple green instead of the customary olive colour and, because very few 2 ct. plus demantoids of that colour are mined each year.

Another dealer displayed a 50.09 ct. purple-to-violet colour-change sapphire from an estate, which, he claimed, sparked a lot of interest, and a pearl dealer offered a 20.48 mm x 23.21 mm drop shaped South Seas cultured pearl. 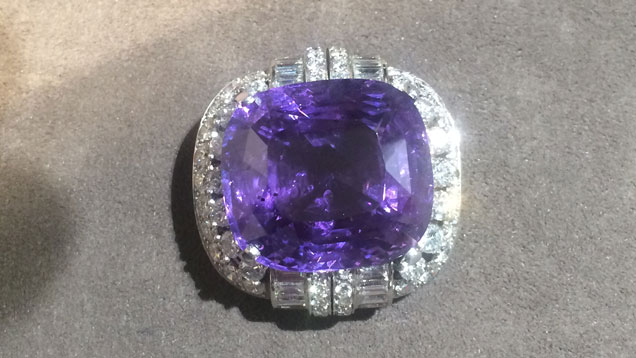 This 50.09 ct. colour-change, purple-to-violet sapphire, offered by Pioneer Gems of New York, was one of the rare and unusual gemstones on offer at Baselworld. The sapphire, set in a ring accented with colourless diamond melee, came from an estate. Please note: this photo was taken using a mobile phone under harsh lighting conditions. Photo by Russell Shor/GIA

The high-end jewellery houses and luxury watch companies that debut their products at the fair put their focus more on design and less on the gem-covered look of a few years ago.

“Fewer diamonds, strategically placed for maximum show,” is how Chopard put it for their new “Happy Diamonds” watch line. This line had four 5 millimetre (a bit less than 0.5 cts.) diamonds floating inside the watch dial. The focus was on craftsmanship and design said the company.

This 5.03 ct. synthetic Fancy Deep blue diamond was on display at Baselworld by New Diamond Technologies of St. Petersburg, Russia. The company claims it is the largest synthetic blue diamond created by the HPHT process. Photo by Russell Shor/GIA

Even Laurence Graff, known for some of the costliest diamond jewellery in the world, took a step back from ultra-bling to create a more modest line of sapphire and diamond watches in its “Butterfly” collection.

Swiss watchmakers reported that exports of luxury watches made there had declined by nearly 8% during the first two months of the year, largely because of a 33% decline in exports to Hong Kong (continuing a year-long slide), where the Chinese slowdown has hit hard, and a 13.7% fall in sales to the U.S., where ostentatious luxury is falling out of favour.

Also at the show, a Russian synthetics manufacturer displayed a 5.03 ct. Fancy Deep blue it claimed to be the largest blue diamond ever grown by the HPHT process. The company said it took much more than a week to grow and is in the process of creating additional synthetic blues.

The world’s turmoil has begun to catch up with the super rich, who comprise most of the demand at Baselworld.