An Introduction to Simulants or Imitation Gem Materials

The jewellery industry uses the term “simulant” to refer to materials, such as CZ, that look like another gem and are used as its substitute but have very different chemical composition, crystal structure, and optical and physical properties. These simulants, also known as imitations or substitutes, can be natural or man-made.

Synthetic cubic zirconia (CZ) – Numerous gems have been used as diamond imitations throughout history, but synthetic CZ has surpassed them all in popularity.

Introduced in the late 1970s, CZ is made by placing powdered zirconium oxide inside a metal chamber and heating it to its melting point. The melt is then slowly moved away from its heat source, so that crystals grow at the bottom of the melt until the whole melt has solidified.

CZ has a Moh’s hardness of 8.5. That means it is a hard and durable gem although not as hard as diamond. Most CZ can be described as colourless, and most has high clarity with minute, if any, imperfections. CZ will, however, yellow over time. CZ has slightly more fire but less brilliance than diamond.

Cubic zirconia can be produced in almost any colour. Pink and yellow CZ can be used as convincing pink or yellow diamond imitations. Other coloured CZ offers good imitations of darker red, purple, blue, green or black gemstones. 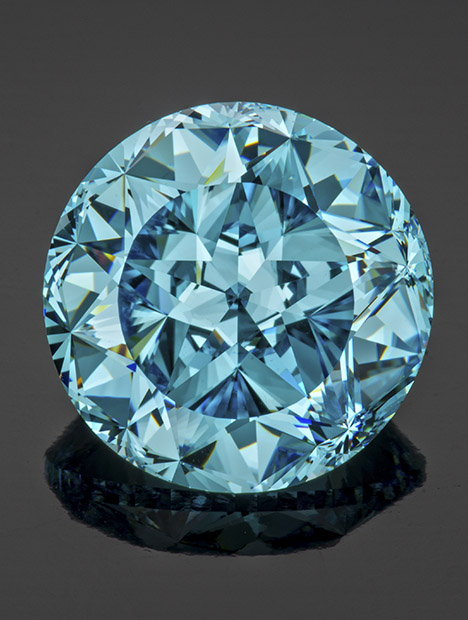 This blue CZ is a whopping 700 carats and has been faceted to have 722 facets. Photo: Robert Weldon. Courtesy: Victor Tuzlukov 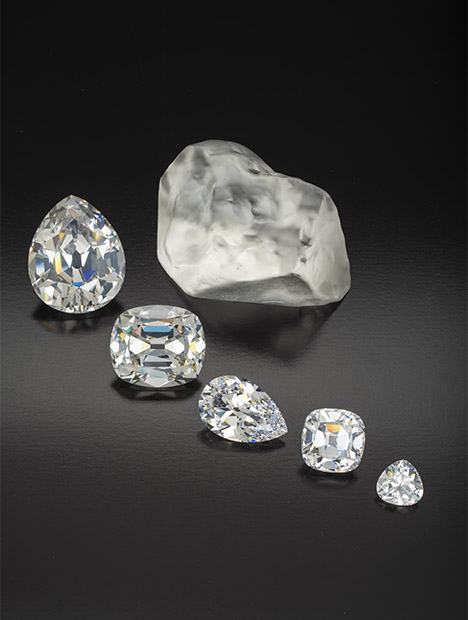 Moissanite can be colourless to near colourless. Its value often depends on its degree of colourlessness. Moissanite tends to have a few more inclusions than CZ, with clarity that could be described as having minor, if any, imperfections. It has a hardness of 9.25 on the Moh’s scale, which makes it very hard and durable, although not as hard as diamond.

Moissanite has more than twice the fire of diamond and slightly more brilliance. In large sizes, one carat or above, its intense fire may give it away as a non-diamond gem. In very large sizes, its display of extreme fire is sometimes called the “disco ball” effect.

It is also different from diamond visually in that it is doubly refractive, so viewers will see a double image of its back facets. This means the inside of the moissanite may appear blurry. Some moissanites look slightly yellow or grey when viewed at certain angles.

Moissanite can come in colours such as yellow, black and blue and can be used as a coloured diamond substitute. 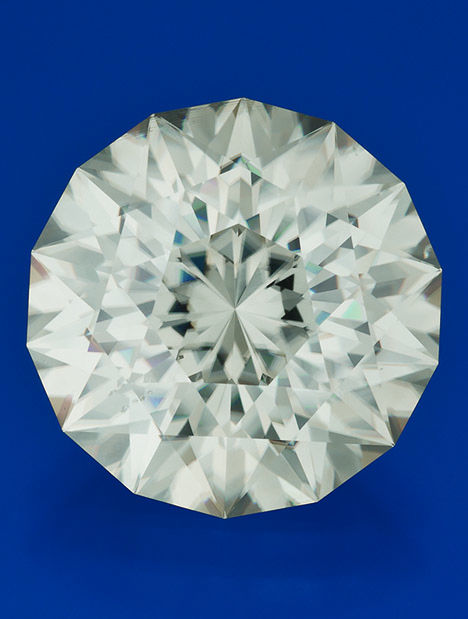 Moissanites have slightly more brilliance than diamond and more than twice the fire. Photo: Robert Weldon/GIA 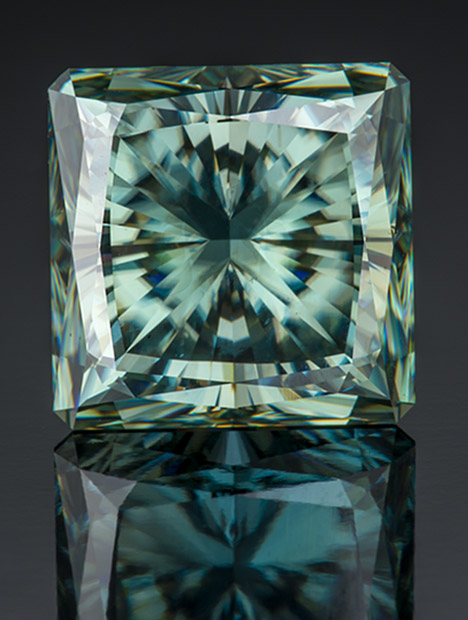 Synthetic spinel – synthetic spinel is often used as a simulant because it can mimic the look of many different natural gems (such as sapphire, zircon, aquamarine and peridot), depending on its colour. Its accurate reproduction of a wide variety of colours makes it a common choice for imitation birthstone jewellery. 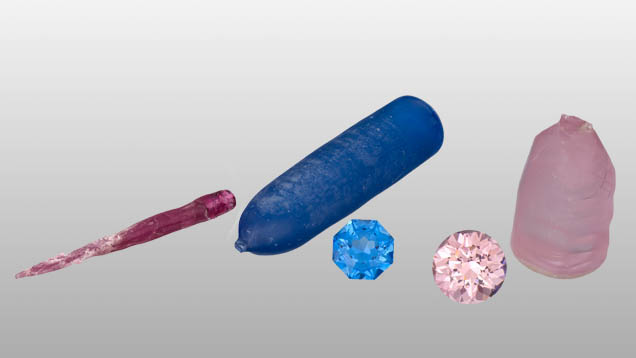 This group of synthetic spinel boules and cut stones illustrates how this man made material can be made to look like other gemstones, such as ruby and various colors of sapphires.

Synthetic rutile – synthetic rutile was introduced in the late 1940s and used as an early diamond simulant. Made by the flame-fusion method, it is nearly colourless with a slight yellowish tint, but it can be made in a variety of colours by doping (adding chemicals during the growth process). 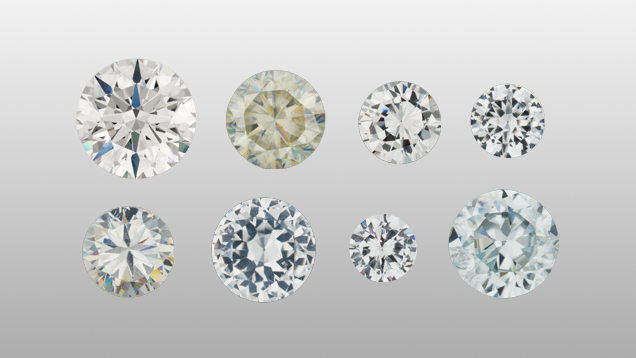 Strontium titanate – this colourless man-made material became a popular diamond simulant in the 1950s. However, its dispersion (the optical property that creates fire in a faceted gemstone) is over four times greater than diamond. Strontium titanate is most often produced by the flame-fusion method and can be made in colours such as dark red and brown by adding certain chemicals during the growth process.

YAG and GGG – several man-made materials have been used as diamond simulants over the years. In the 1960s, yttrium aluminum garnet (YAG) and its “cousin” gadolinium gallium garnet (GGG) joined classic simulants like glass, natural zircon and colourless synthetic spinel. YAG and GGG are also available in a variety of colours. 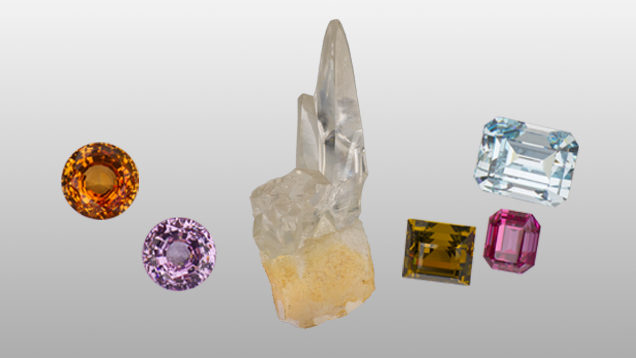 Yittrium aluminum garnet (or YAG) can be manufactured in a variety of colours such as those seen here. The colourless crystal is used as uncut material to fashion diamond simulants.

Glass – manufactured glass is an age-old gem imitation that is still used today. Since glass can be manufactured in virtually any colour, it is a popular substitute for many gems. Although it is less brilliant, glass is used to imitate stones such as amethyst, aquamarine and peridot. It can also be made to look like natural phenomenal gems, such as tiger’s eye and opal, and fused layers of glass can imitate the look of agate, malachite, or tortoise shell. 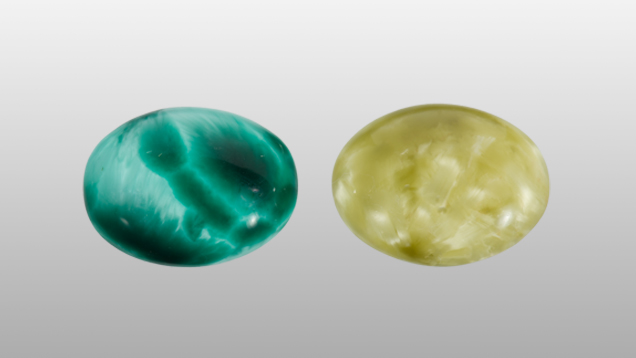 Glass, like this material, can be made to look like a variety of gemstones; in this case glass makes a convincing substitute for malachite (left) and rutilated quartz (right). 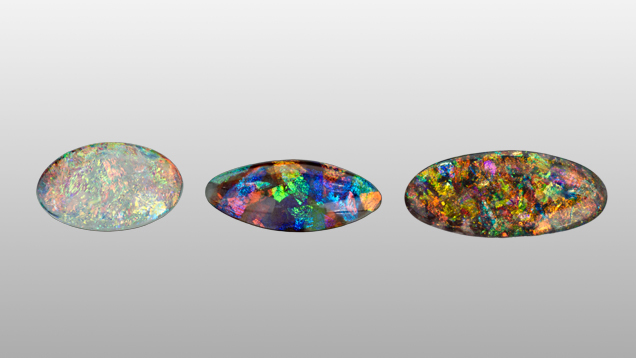 A glass material known as “slocum stone” can mimic the appearance of opal.

Plastic – plastic is often used to imitate gemstones in inexpensive fashion jewellery. However, this modern man-made substance has also been manipulated into convincing imitations of organic gems such as amber, pearl and coral, or aggregate materials such as jade, turquoise and lapis. Plastic is not a durable imitation, so special care must be taken to prevent damage.

Quench crackled quartz – Natural colourless quartz can sometimes be subjected to thermal shock, known as “quench crackling”. The colourless material is first heated, and then subjected to quenching in a cold, liquid solution—such as water. The sudden contraction causes the material to develop a series of cracks that radiate throughout. Because these are surface-reaching fractures, the quartz can then be subjected to additional immersion in a dye solution, allowing the fractures to be filled with coloured liquid. This makes a convincing simulant for natural gems such as emerald, ruby and sapphire, although the fractured and dyed appearance can quickly be seen under the microscope. 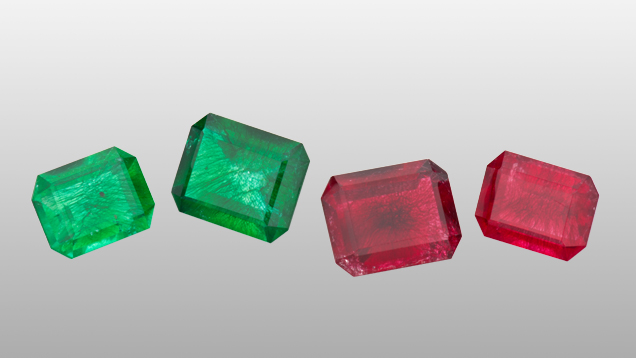 Colourless quartz can be subjected to thermal shock to create a series of tiny fractures throughout the stone. Dye is then introduced, causing the material to simulate many different kinds of gems, in this case emerald and ruby.

Ceramic beads – you’ve probably heard the term “ceramic” applied to clay pottery. In general, a ceramic can be any product made from a non-metallic material by firing at high temperature. Two popular non-faceted gems, imitation turquoise and imitation lapis lazuli, are produced by ceramic processes. During this process, a finely ground powder is heated and sometimes placed under pressure to recrystallise and harden to produce a fine-grained solid material.

Imitation turquoise – the cool blues and greens of turquoise have attracted people for centuries. More than 5,000 years ago, Egyptian pharaohs first adorned themselves with turquoise. The familiar gem is a microcrystalline aggregate that often features attractive, vein-like inclusions of host rock known as matrix. In the early 1970s, Gilson introduced an imitation turquoise as well as an imitation lapis. 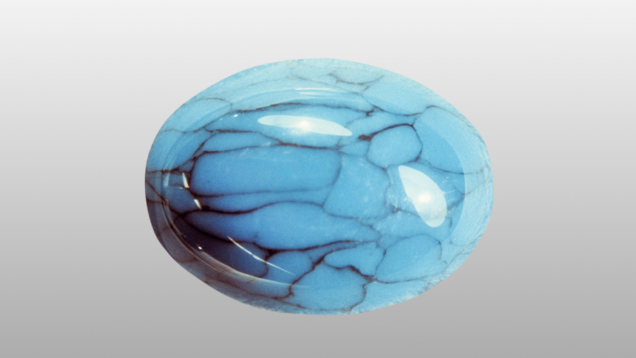 Imitation lapis lazuli – dark blue lapis, treasured by ancient civilisations, has been mined in Afghanistan for more than 6,000 years. The gem is an aggregate of several different minerals. It sometimes contains gold-coloured flecks of pyrite that can enhance its appeal. Gilson’s lapis is more accurately considered an imitation because it has some ingredients and physical properties that are different from natural lapis.

When manufacturers glue or fuse two or more separate pieces of material together in the form of a faceted gemstone, the result is called an assembled or composite stone. The separate pieces can be natural or man-made. The flat surfaces that are glued together are parallel to the large table facet of the gem so as to impart a more uniform face-up colour. 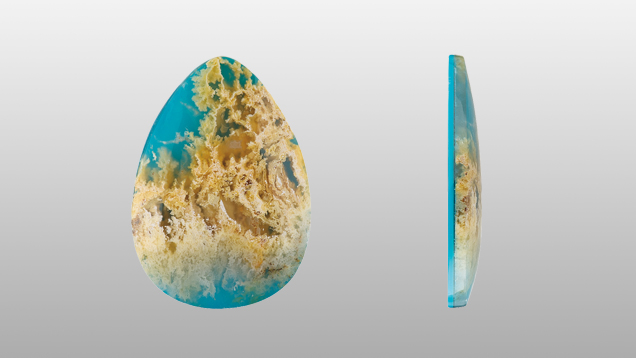 A doublet, such as this one, contains two joined portions of a gem that are held together by colourless glue, as a profile view of this material shows.

Triplet – a triplet has three segments, or two segments separated by a layer of coloured cement. 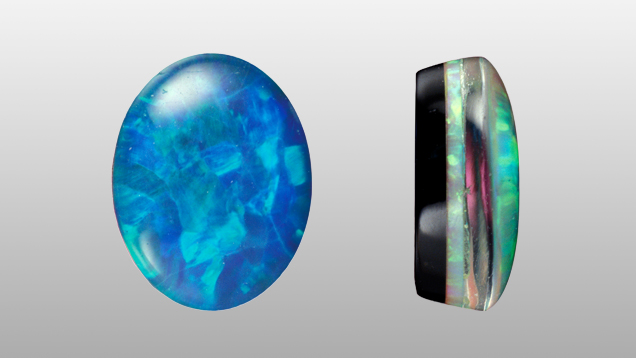 A triplet contains two or more segments of a gem, or different gems, that are joined by layers of glue. In a profile view, this image shows a thin seam of opal in the centre that is backed by dyed black chalcedony, and is overlaid (the domed area) by a quartz cabochon.

Although doublets and triplets are used to imitate natural gems, assembled stones are not always imitations. This is the case with natural opal, which sometimes occurs in layers so thin that they need reinforcement to be sturdy enough for jewellery use. Black onyx, plastic or natural matrix have served as the bottom layers of opal doublet or triplet cabochons. Opal triplets are topped with a transparent dome made of rock crystal, plastic, glass or synthetic corundum.